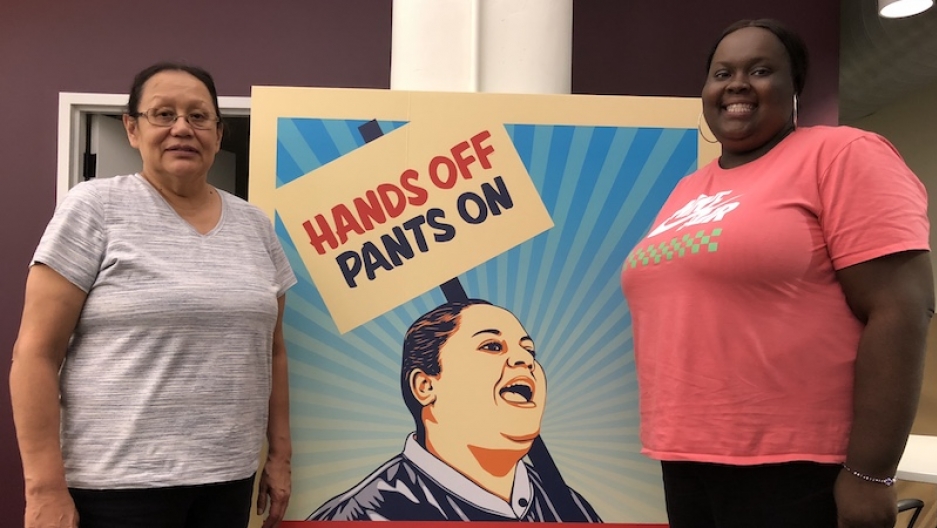 Tina (left) and Latonia are members of Unite Here Local 1 in Chicago. They asked that their last names not be used. A year before the #MeToo hashtag started to circulate, they were having conversations with their co-workers about being sexually harrassed on the job. Those conversations led to a citywide movement called Hands Off Pants On and a device all hotels must provide for their housekeepers called a panic button.

Latonia was in the break room when some women from the union she belongs to, Unite Here, approached her and her co-workers to talk about sexual assault on the job. She felt nervous but she also thought to herself, “This is our opportunity to kind of share things that we deal with every day.”

That was in the spring of 2016. Latonia, who asked that her full name not be used nor the name of the hotel where she works, for fear of reprisal, recalled an incident one day on the job: “So, this particular time, you know, I knocked and went into the room and this guest is standing there completely naked.” Latonia immediately backed out of the room and reported it to her manager, who simply told her not to go back to the room that day. That was it, though. Latonia still had to clean his room the next day. She brought a co-worker along and didn't see the man that time but "I felt disgusted and angry," she said, adding that she was disappointed with what she felt was indifference on the part of hotel management. "They kind of treated it as normal."

After that break room conversation, over the following year, Latonia and other union members set out to survey more than 500 hotel housekeepers in Chicago about their experiences on the job. Nearly 60 percent of the women said they had dealt with some form of assault by a hotel guest or had experiences like Latonia's.

So the union organized. Last year, housekeepers in Chicago successfully lobbied for a device to keep them safe. It’s called a panic button, and it was part of a citywide campaign known as Hands Off Pants On. The devices officially became a mandate for Chicago hotels on July 1 of this year. 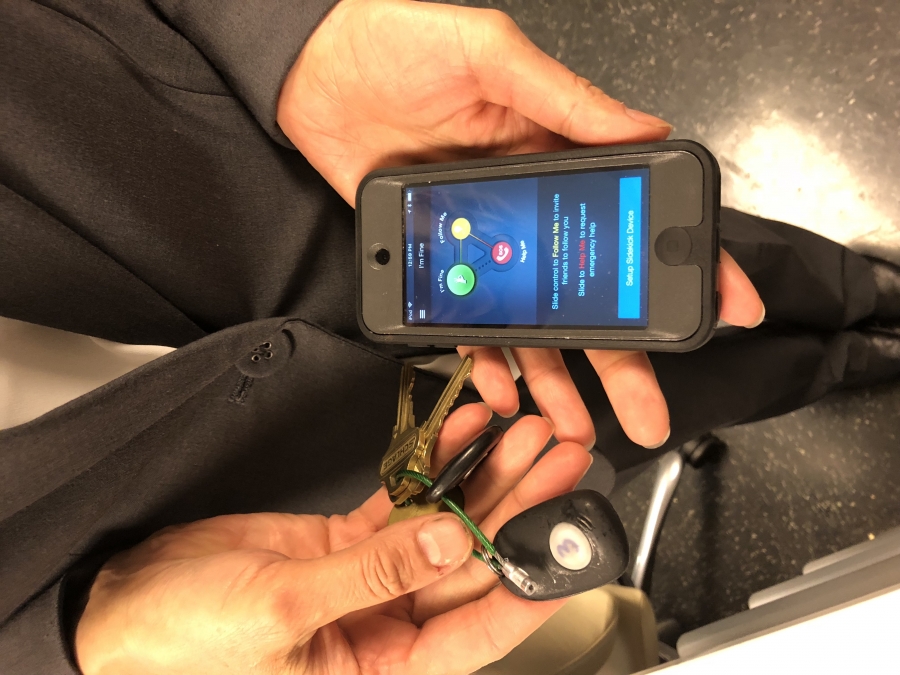 TheWit Hotel in Chicago's downtown Loop was one of the first in the city to roll out these personal safety devices. Their system is called React Mobile. Here, theWit head housekeeper, Arifa Hodzic, shows how it works. A housekeeper can push a button on the key fob, and it alerts hotel security. The fob is paired with an iPod touch safety device.

The union had some help from city hall. Alderman Michelle Harris represents the city's South Side. She's used to tackling social issues, and so when female housekeepers came to her office to ask her what she could do to protect them in the workplace, she was naturally inclined to help. The women told her stories about how they felt unsafe at work and feared retribution for complaining or reporting incidents.

"So I was thinking, 'Gee, how can you get up every day and do a job if you feel like you're afraid to go into work, but you're doing it just for the check. And, you're just willing to take all kinds of abuse just because of that.'"

So she worked with the city's hotels, local business leaders and Unite Here to come up with the Hotel Workers Sexual Harassment Ordinance. Today, by law, every hotel in the city has to provide the safety devices to their workers. The ordinance also includes a retaliation clause. In other words, women cannot be fired for speaking up. And, when someone reports an assault on the job, the city's Commission on Human Relations handles the complaint.

Harris says there hasn't been a policy like this until now. Before, anyone could file a sexual harrasment claim, but the process was never clearly outlined for hotel workers. The panic buttons are new, too. Harris says she wants hotel housekeepers to feel confident — to be able to say to themselves: "This hotel, this industry, cares about me, cares about who I am and cares that I feel comfortable doing my job every day."

Chicago isn't the only city responding to the problem in this way. Seattle, New York and Washington, DC, also have similar ordinances in place to protect hotel workers.

In Chicago, theWit hotel in the Loop rolled out its panic buttons months ahead of schedule. It's called React Mobile. TheWit's head housekeeper, Arifa Hodzic, said, "I honestly think it's a great thing." She pressed a key fob that activated a button on her paired iPod touch device. When a housekeeper presses the key fob button, it alerts hotel security right away.

Hodzic has never been in a situation where she's needed a panic device, but she's glad her housekeepers have it handy. Hodzic came here in the '90s from the former Yugoslavia. The war there was ending and things were desperate there.

"No food, a lot of fighting ... my husband's family lost everything," she said. When Hodzic arrived in Chicago, she started out cleaning houses before landing a housekeeping job at The Ritz Carlton. Since then, she's worked at several hotels and moved up to head of housekeeping at theWit.

Hodzic is one of many immigrant women working in this industry in the US. According to a 2015 study from the American Immigration Council, housekeeping and hotel work is the top occupation among immigrant women across the country. Almost 900,000 immigrant women are employed in the profession nationwide. And many of them say they've experienced harassment. A separate 2016 study from the US Equal Employment Opportunity Commission says that women in the industry are particularly vulnerable because they work mostly alone in secluded areas of the hotel — out of earshot if they cry for help.

How are hotels protecting workers globally?

Sexual assault in the hotel industry is a global issue. So, what are some of these larger chains doing to keep their workers safe in other major cities — say, Paris or Dubai?

Some big international hotel chains announced in a September press conference that they're committed to something called a "Five Star Promise," which includes safety devices, but just for hotels in the US and Canada.

Cathy Feingold, the international director of the AFL-CIO, says it's unfortunate that more hotels don't have plans to give safety devices to their workers. She and some of the housekeepers who campaigned for the Chicago panic button ordinance were at an international labor conference in Geneva last June. There, they met with housekeepers and other hotel staff and talked about their efforts to keep the pressure on employers to make their jobs safer.

Feingold said hotel chains should be doing more to protect their employees. They "should be doing the right thing whether they're here in the United States or around the world," Feingold said. "So, Unite Here is really focused on making sure that if there's a best practices happening here in the United States, they can do it in China where they have massive investment and expansion. They could do it throughout Asia, throughout Latin America."

Back in Chicago, Latonia is glad she has the panic button at her fingertips. She says that the global #MeToo movement gave their Hands Off Pants On campaign a boost. It got everyone talking about sexual harassment on the job. Before that, she says, women like her didn't have much of a voice on the issue.

“Then all of a sudden, all of this stuff started showing up in the news," said Latonia. "And I'm just like, ‘This is incredible.' Because like, we all had the same feeling like we've started something.”

These days, when she's on the job, she doesn't feel like she has to be looking over her shoulder all the time. She can just press a button.