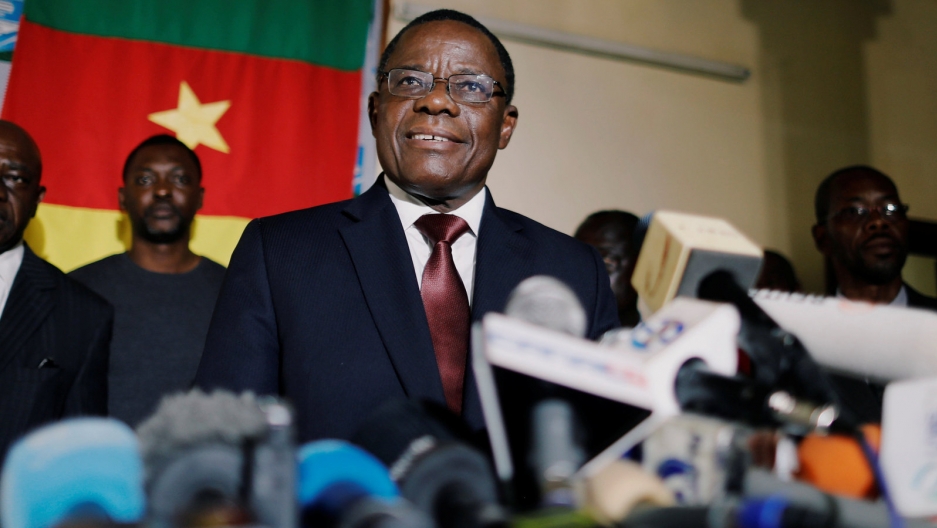 Opposition candidate Maurice Kamto of Renaissance Movement (MRC) smiles as he holds a news conference at his headquarters in Yaoundé, Cameroon, Oct. 8, 2018.

Cameroon opposition candidate Maurice Kamto declared victory in Sunday's presidential election, but incumbent President Paul Biya's party dismissed his claim as fantasy and accused him of breaking the law by making it.

"I invite the outgoing president to organize a peaceful way to transfer power," Kamto, who leads the Movement for the Rebirth of Cameroon (MRC), told a news conference on Monday in the capital Yaoundė.

The election, marred by low turnout and isolated incidents of unrest in separatist Anglophone regions, was widely expected to extend Biya's 36-year rule as one of Africa's last multi-decade leaders.

"My mission was to take a penalty. I did it and I scored," Kamto said to chants of "freedom" by jubilant supporters in a courtyard outside. He offered no evidence to justify his claim to have won.

"It is not right at all to announce this. He hasn't won anything at all. It's totally illegal," he said, adding that it was too early to say if anyone had won.

"Kamto was not even represented at all the polling stations, [so] it was impossible for him to count all the votes," he added.

"The only body entitled to collect all tallies and publish results is the constitutional council," he said, adding they would be published within 15 days from the poll as required by law. "Everyone must abide by the law."

Minister of Territorial Administration Paul Atanga Nji had said on Sunday that any form of challenge to the verdict of the constitutional council would "not be tolerated."

Cameroon, a major cocoa producer also dependent on oil exports, has seen economic growth of over 4 percent a year since Biya was last elected in 2011. But many of its 24 million people live in poverty, and a two-year-old uprising in the Anglophone regions has killed hundreds and forced thousands to flee.

In that time, an Islamist Boko Haram insurgency in the north, which spilled over from neighboring Nigeria, has killed scores. Cameroon authorities have drawn fire for a heavy-handed and sometimes indiscriminate approach toward containing it — a video circulating online is being investigated that appears to show men in military uniform shooting women and children.

Related: As gang violence escalates in Cameroon, residents are 'not safe anymore'

Kamto's spokesperson Olivier Nissack later said that since Kamto did not give any numbers, he did not break any rules.

"Maurice Kamto did not proclaim himself president, he claimed victory, it's not the same thing," he said.