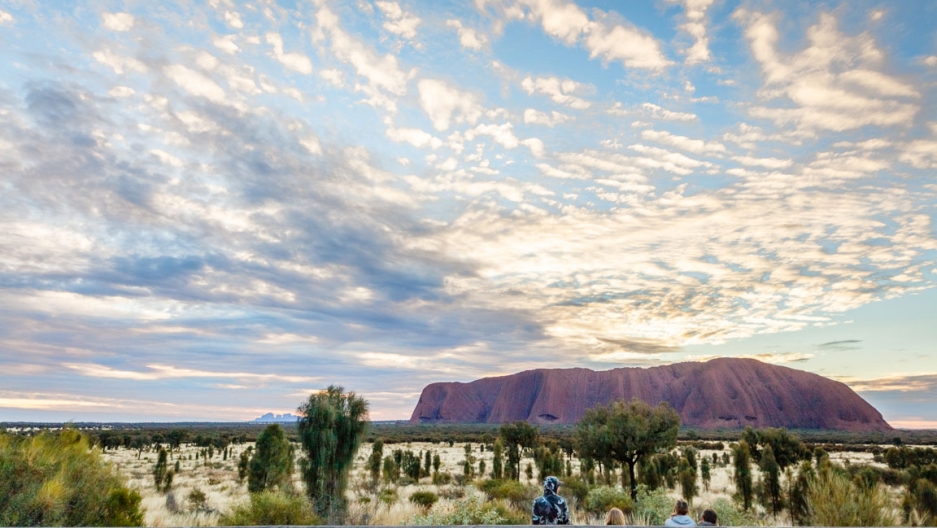 Tourists rise early to travel to this Sunrise Viewing Station for early morning glimpses of Uluru.

When Brian Butler gazes up at Uluru, the large red rock in the middle of Australia, he sees a woman’s silhouette. She’s lying on her back, nose pointed to the stars.

Butler is the grandson of an Aboriginal “Traditional Owner” of Uluru. For his people, this rock is deeply sacred and they never walk on it.

A few feet from where Butler sits at the foot of Uluru, another Australian, Andrew Shoobridge, also gazes up at the red rock. What Shoobridge sees is a magnificent rock-climbing opportunity on a rare natural monument.

“It doesn’t look so bad from here,” Shoobridge said, “but there are some very steep points, and very windy points.”

He has climbed Uluru multiple times over the years, and on this warm June morning, he’s here with his daughter and her family, who are attempting to climb the rock. He enthusiastically peppers his grandchildren with tips for the climb.

As Shoobridge watches his grandchildren clamber tentatively up the first side of the rock — it’s a sharp ascent on very smooth rock surface, with no steps — his wife Helen shakes her head. She didn’t approve of her family climbing Uluru.

“I’m in favor of respecting the Aboriginal people and their need to keep it sacred,” Helen Shoobridge said.

She said she was clear with her daughter, Louisa, telling her that local Aboriginal people ask that no one climbs the rock because it is sacred to them.

“But my daughter is very determined,” Helen Shoobridge said.

Louisa and her husband decided to visit Uluru with their own children for one main reason: come October 2019, climbing Uluru will be banned.

Named Ayers Rock by white explorers, this large, natural wonder in the middle of Australia has been a tourist mecca for decades. There’s a fancy resort close by and tour buses bring visitors in daily. Yet on the other side of the rock is a community of Aboriginal people living in deep poverty — and they are the owners of Uluru.

For years they have threatened to “close the rock” to climbers if their lives don’t improve. The decision pleases Brian Butler and members of the Anangu Aboriginal community, who are the Traditional Owners of Uluru. They have never wanted tourists to climb it.

When tourists began coming to Uluru back in the 1950s, the local Aboriginal community was not in charge. All they could do was ask that no one climb. Today, there is a cultural center nearby that spells out clearly how sacred the rock is and why it offends the Aboriginal owners when tourists scamper on it. There are also signs near the foot of the rock that say, in multiple languages: Please Don’t Climb. 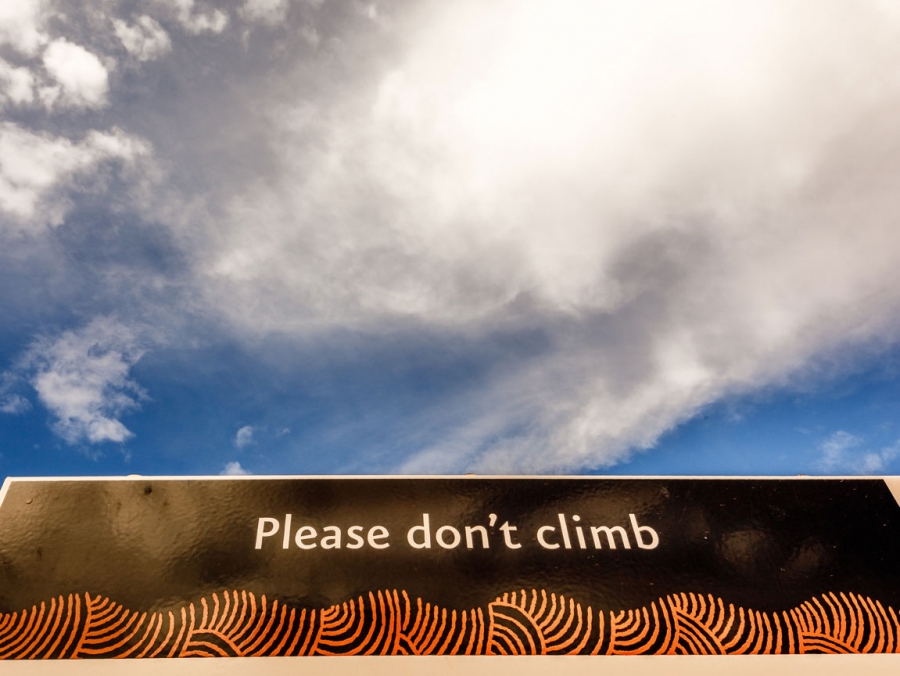 Signage at the base of Uluru implores visitors not to climb the rock. Climbing Uluru is offensive to local Aboriginal owners.

In 1985, the Australian government returned ownership of Uluru to the Traditional Owners. One of the conditions of the return of Uluru to the Aboriginal owners was that they lease it back to the government and that climbing still be permitted. Management of the land around Uluru is shared between the Anangu and Australia’s National Parks agency. Yet, said Steve Baldwin, the manager of the national parkland that includes Uluru, for many years a primary function of his staff has been explaining to tourists why Uluru is sacred to the Anangu people, and why they shouldn’t climb it. It offends the Aboriginal community, he said.

“The [Aboriginal owners] call the [tourists] minga, which is ants, and that comes from observing them on the climb,” Baldwin said.

He often has to explain to tourists why climbing Uluru is so offensive.

Over the years, the increased education of visitors about why they should not climb Uluru has had an impact. Many people began to walk or cycle around the base of the rock, or to just observe it from below. The number of climbers declined in the last few years, but park officials could not provide specific numbers. Baldwin said once the number of climbers dropped below 20 percent of those coming to visit, the decision to close Uluru to climbers was much easier to make. It was a joint decision between his team at Parks Australia and the traditional owners. It was a big deal, Baldwin said.

“I was in the room on that day, and there were people in tears, It was massive,” he said.

Baldwin said they have been developing alternative activities for tourists over the last few years as the number of climbers declines. 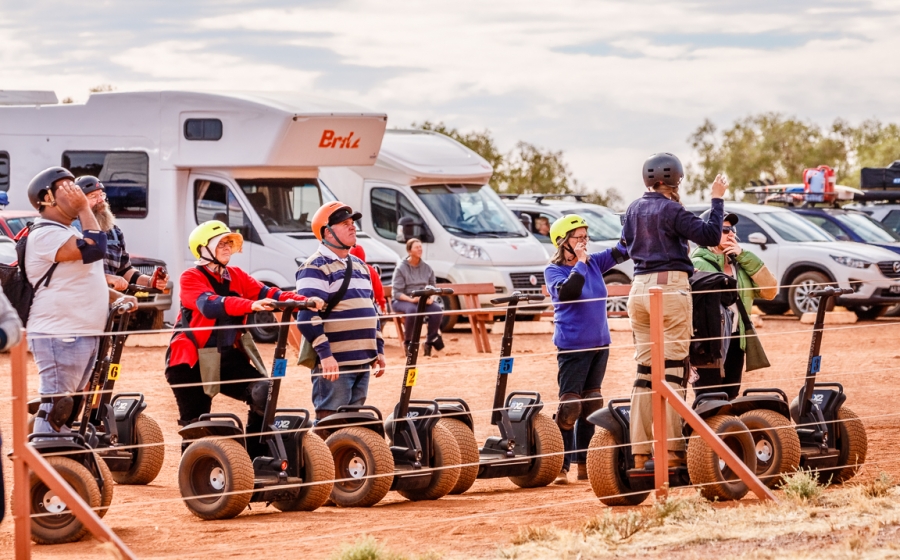 Don't want to walk around the base of Uluru? How about a tour on a Segway? With the rock closing to climbers in 2019, Parks Australia and local tourism operators are developing alternative activities.

“You can take a cycle and cycle around Uluru,” Baldwin said. Or perhaps drive around the rock as you “have a progressive dinner on a double-decker bus at night.”

There’s a field of lights set up some distance away to hike through and take in different angles and lights on the rock. And there are more activities being developed.

Despite not wanting tourists to climb Uluru, the local Aboriginal community does want tourists to keep coming. It is their only substantial source of income.

Anangu chairman Sammy Wilson was part of the National Park Board of Management that decided to close the climb in 2019. He said his community appreciates the tourism.

“Visitors come here and they love it,” Wilson said.

He said he wishes his people could be more directly engaged with the bigger tourism operation that sits just outside the national park boundary.

“We want to do something for the visitors,” he said. “Do a tour.” 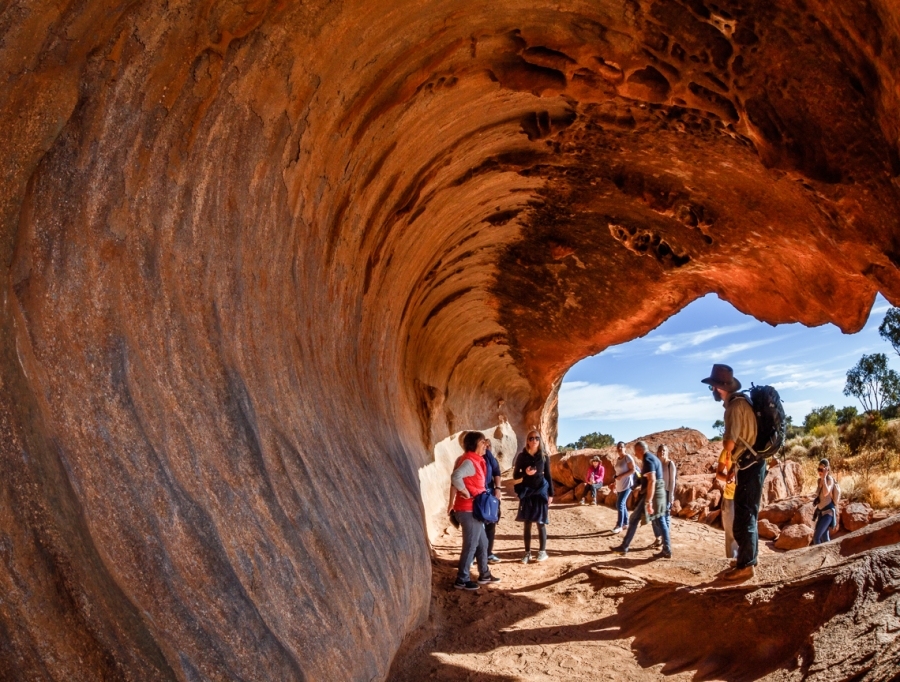 Guides give walking tours around the base of Uluru as an alternative to climbing the rock. They explain the unique rock formations and contours, as well as sites that are of special spiritual significance to Aboriginal people.

There is also a large resort a few miles away which is the only place for tourists to stay when visiting Uluru. Very few of his people are employed there, Wilson said, and those who are have menial jobs, like hotel maids. These jobs don’t pay well, and they remind Aboriginal people of the years when were forced into this kind of labor for basic rations, Wilson said.

“Our family was doing that [work] in the missionary days, in the ration days, getting rations — flour, sugar, tea,” he said. “[They] don’t want to do that job, they want to do a proper job, a real job.”

Tourists come to Uluru and spend money: They rent apartments and expensive hotel rooms. Even a cheap restaurant meal for one person is at least $25.

But that money rarely trickles down to the Anangu, Wilson said.

Tourists gather at this evening viewing spot to see Uluru as the sunset brings vast color changes and shadows to the face of the rock.

The Uluru national park entrance fee is about $20 for a three-day pass. The Aboriginal owners get a quarter of that. The resort, located on Aboriginal land, takes in significantly more yet none of the profits are shared with the Anangu.

The Indigenous Land Corporation (ILC) that owns the resort would not share profit-loss information with PRI, but spokeswoman Claire Munitinga said, “the outlook for Ayer Rock Resort remains solid with expectations that occupancy will be maintained at over 80 percent and reach accommodation capacity in peak months.”

So why not share some of those profits with the local traditional owners? That might happen soon, according to Eddie Fry, ILC  chairperson.

“In relation to Uluru, that is a matter that we have certainly turned our attention to in the last 12 months and we’re working very very hard on that as I speak,” Fry said.

He promised that one year from now the jobs and profit-sharing with the Anangu people would be much better.

Fry said since taking over the Uluru resort six years ago, they’ve markedly increased the number of Indigenous workers and started an on-site hospitality training school for Aboriginal people. However, most of these slots are currently filled by Indigenous people from around Australia, fewer from the local community, according to the ILC.

Butler is saddened when he visits Mutitjulu, the local community right at the foot of Uluru. He used to live there, and every time he comes back, he is dismayed to see the garbage strewn about, the dilapidated houses, unkempt kids. He wishes more of the tourism dollars would be used to bring health, hygiene and education programs to Mutitjulu. People can’t even afford the basics, he said.

It’s difficult to separate the income and poverty level of the Traditional Owner community in Mutijulu from others who live there who have higher paying jobs at the resort or with Parks Australia. But Butler points to the visible poverty in the section of Mutijulu where Anangu families live.

“You walk around the community in Mutitjulu, and you’ve got snotty nosed kids,” Butler said. “[There’s no money or program] to give the family a packet of tissues. No way. You don’t see it.”

Like other Aboriginal leaders, Butler believes good jobs are key to moving people out of poverty, and given there is a massive tourism operation sitting in this rural community’s lap, he sees no reason things should be this way.

As the sun sets on Mutijulu this winter day, Sammy Wilson drives in after a day’s work guiding tourists around Uluru and telling them his ancestor’s stories. A few women artists who are employed at the nearby cultural center to paint large canvases for tourists have also wandered back and are reclined on benches in front of the town’s only tiny grocery store, sipping sodas. They’re all quiet, gazing at the giant red rock that is both a sacred place and the source of their livelihood as it gets less red and more purple, and then a dark grey, and finally black as the sun completely disappears.