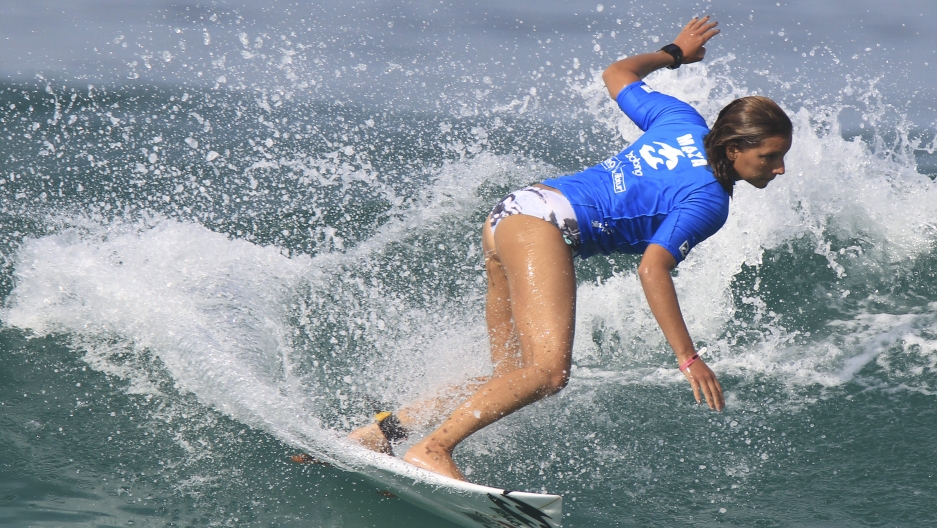 This week, Maya Gabeira was awarded the Guinness World Record for the biggest wave surfed by a woman.

In 2013, Gabeira nearly drowned in Nazaré, Portugal — a location famous for its huge waves — after a horrible wipeout broke her leg, herniated discs and pulled her underwater, almost killing her.

However, Gabeira returned to Nazaré in January where she crushed an astonishing 68-foot wave, winning her the Guinness World Record. Until this year, the award had only been won by men. Gabeira pushed for Guiness to create a women's category.

She told The New York Times, "It was essential to have a separate record."

The World's Marco Werman spoke to Gabeira from Portugal, where she's preparing for the upcoming surf season.

Marco Werman: I want to ask you a little bit more about the Guinness record in a second. But let's go back to 2013, because you were at these waves before in Nazaré and it was almost fatal that year. Tell me what happened.

Maya Gabeira: Yeah, 2013 was basically the first year I came over and it was still in the very early stages of the wave being surfed, you know. Just two years after Garrett McNamara came here the first time. We went surfing, thinking that all the experience of other places would be enough in Nazaré — but it's just a different game, really.

I fell on my first wave, a really big wave, my biggest wave until that time. And I broke my fibula and I had a lot of waves hit my head. I had one really big wave hit me after the one I fell and that was a huge impact that took off my life jacket and held me under water for two waves. And then I was further to the inside and I had smaller waves hit me. But by then I was really, really tired and I had no life jacket and I had a broken leg so it was just the struggle, really, to reconnect with my driver who didn't find me for around nine minutes. So it was a big fight.

And, in your recovery you just decided "I'm going to keep going." I mean, it takes a lot of motivation. How do you gear yourself back up to get back out?

It was a process, you know. It was five years. I mean I had many injuries — I had three spine surgeries. I had half of my mind in it by being here and being exposed to the sport and being exposed to the waves. So I tried to be present, even though I wasn't fully performing, in order to keep that fire burning and that desire and the focus for so many years.

It's a really special place because we have a canyon that's approximately up to five kilometers (3.1 miles) deep. We don't really know because it's only measured up to 200 meters on the charts.

The Atlantic Ocean is pretty powerful, has a really strong winter. And we get those big fronts coming from New York, or up above, going to Ireland and coming down to us in Portugal. It has a phenomenon that it's hard to understand, but I know that they come in different angles. And I think, like, at times it's just two waves combined that became one and they just get really, really tall.

Whenever I see the videos from Nazaré my stomach just drops. I can't believe people are even doing that. So tell me about your day getting the 68-foot wave, one that you now have the record for.

We were having a pretty spectacular season, a really cold winter and a lot of big days. We went out that morning, it was still dark. We knew that it was going to be really gigantic because of the forecast, but also because it did get gigantic the night before and we saw it right before dark. And we actually waited for three-and-a-half hours for that wave. It was super cold and was quite tiring for my mind and my body to keep warming up, and [stay] focused and sharp and believing that the wave was going to come. Not many waves were ridden that day because it was so big and difficult. So when that wave came, we were basically waiting way far out, nobody was around us. And it came for us and we just decided to go for the second one to be safer and to have a smoother ride. I saw it and I knew it was going to be really big. So, I just started focusing on really completing that ride.

As you said, you worked really hard for this and yet you were awarded this Guinness World Record this Monday — many months later. Tell me more about the whole process and what took so long.

Well, you know, there was difficulty in the process. There was no division for women in the Guinness book. It was considered to be just one record. And obviously it was the men's record because they were surfing bigger waves than us. So, it was hard to get a woman's biggest wave record in the Guinness book.

You know, it's a new category. You need people to really care for it and really commit to it. And I think if there is not one athlete that really pushes towards it, I mean nobody is just going to sit there and be like, "Yeah let's just add a women's category." That's not how it works.

Women have to fight to get their space where it's supposedly just a man's world. So, if you scream loud enough then you get heard. And that's what happened. In the end it was taking so long I didn't know what to do anymore and I started a petition. A lot of people went out and signed it and gave me tons of support and that's, I think, what really rushed the whole process to happen this year.

One thing I like to hear from our guests on our show is what music they listen to. I know surfers often have a tune in their head as they paddle out or some chill music to wind down after a big wave session. What are you listening to lately, Maya?

Oh my god so many things. I love the new "Everything is Love" from the Carters, Jay-Z, Beyonce. What else am I listening to? Cardi B., I like hip hop, R&B.

I surf because, I mean, its a wonderful sport. You get to be in the water and connect with nature. And no wave is the same as the others. So, it's always different, it's always challenging. There are so many variables. I don't know, I just love the lifestyle. And for big waves in particular, it's just such a big challenge. I've always moved towards challenging things and difficult things and I always thought that big wave surfing was the hardest thing you can you could do in surfing and I think that's one of the reasons I got drawn into it.