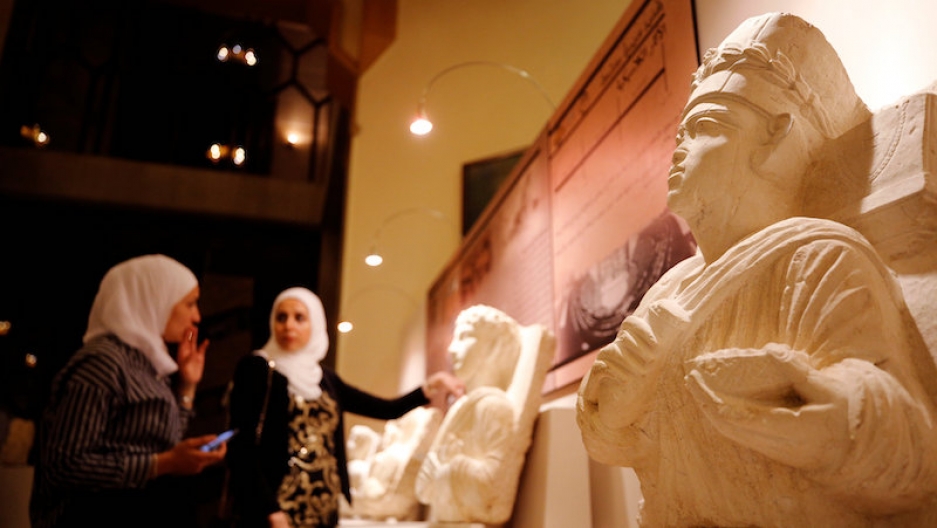 Visitors look at restored sculptures in an exhibition, at the Opera house in Damascus, Syria.

A stone image of an ancient priest is one of hundreds of stolen antiquities recovered by the Syrian government and put on display in Damascus this week, a reminder of the mass looting of Syria's heritage during seven years of war.

It was carved for Yalhi bin Yalhabouda, a high priest in Palmyra, upon his death in 120 AD, his status apparent from his tall hat and laurel wreath. It was illegally dug up during Islamic State's occupation of the desert town.

"This civilization is not only for Syria, but we are the custodians of it and we preserve it for the world," said Khalil Hariri, head of the Palmyra antiquities department.

Syria stood at the heart of the ancient Middle East, a crucible for some of the world's earliest civilizations and was at times incorporated into Egyptian, Babylonian, Assyrian, Hittite, Persian, Greek and Roman empires.

After its descent into a messy, multi-sided civil war in 2011, when the country was fragmented into numerous enclaves, the warring parties began to plunder that inheritance, looting museums and excavating ancient sites.

Islamic State, which from its days as the al Qaeda branch in Iraq had long experience of selling stolen antiquities for profit, seized Palmyra and its extensive Roman-era ruins, a UNESCO world heritage site, in 2015.

As with other parts of Syria and Iraq which it turned into a short-lived "caliphate," it made a public show of destroying many artifacts and ancient buildings as idolatrous, while secretly benefiting from the illicit trade in historical goods.

The group blew up Palmyra's monumental arch and beheaded its 82-year-old antiquities chief, hanging his body from an ancient column. After changing hands more than once, it was retaken by the Syrian army last year.

The life-sized image of Yalhi bin Yalhabouda, standing out in relief from a stone tombstone, was excavated from Palmyra's ancient tombs, said Hariri, and found in a house in the modern town.

It is inscribed with his name and year of death and shows him carrying a cup of sacred oil and a bowl of cereal, such as would have been ritually distributed after his demise.

Iconoclast jihadists had smashed part of the sculpture's cheek and hat, but it was restored. As with all other stolen Palmyra relics seized by the government, it will be returned to the city, Hariri said.

But while thousands of stolen objects have been recovered, tens of thousands more are missing — many of them likely outside Syria and in the hands of specialist dealers ready to wait decades before selling them to private collectors.

The 500 objects displayed in Damascus this week were from eras ranging from 10,000 BC to the Islamic period and were found in captured areas by the army, said Mahmoud Hammoud, head of Syria's antiquities department.