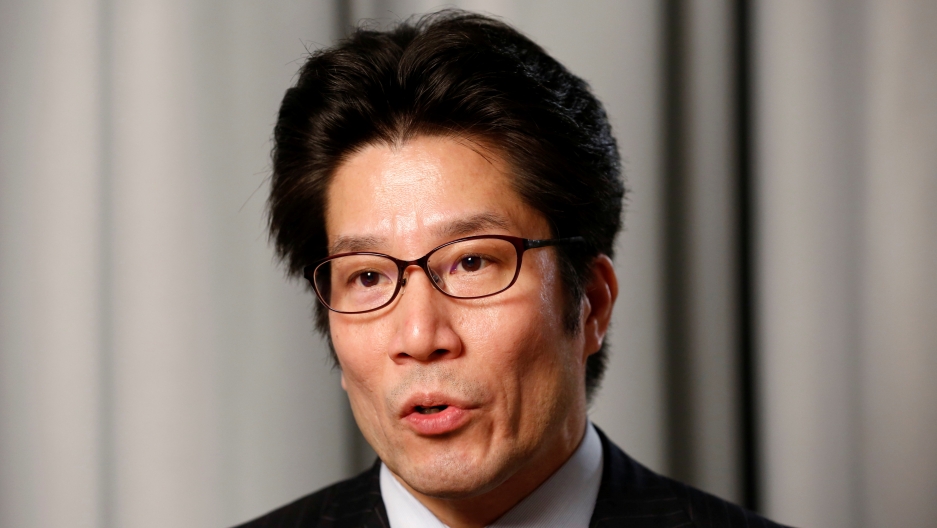 Takuya Yokota in Tokyo in November 2017. He continues to speak out about North Korea's abduction of his sister in 1977.

Takuya Yokota was 9 in 1977 when his sister, Megumi, disappeared from their village in Japan.

Yokota and his brother eventually went out to look for Megumi, who’d had badminton practice that afternoon. They walked to the junior high school to see if she was still there. They even checked an abandoned building to see if maybe she was hiding, but there was no trace of her.

“We suspected maybe she had some kind of accident on her way home, or maybe she was involved in some incident or something terrible,” Yokota says. “We even wondered if she had killed herself, but there was just no clue whatsoever of what happened.”

After that day, home became a grim place. Yokota says he couldn’t understand why his sister was missing, but he didn’t feel comfortable talking about it, either.

“My mother and father, they looked so desolate and we didn’t even know whether it was all right to ask them,” he says. “When we were at school, some of the other children would jeer at us, and say, 'Why is your sister missing?'”

Megumi Yokota is one of 17 Japanese citizens who Japan maintains were abducted by North Korean agents between 1977 and 1983. North Korea has acknowledged kidnapping 13 Japanese people in order to teach Japanese to North Korean spies. Five of the abductees returned home in 2002. The others were said to be dead, including Yokota’s sister. North Korea sent bones as proof, but the Japanese government claims those bones aren’t hers. North Korea also issued a death certificate for Megumi. Her brother says it’s fake.

“According to this certificate, my sister died in 1993, but the five abductees who were returned to Japan told us they saw her after that,” he says.

Yokota and his family are active in an association of relatives of the abducted Japanese. He says the North Koreans issued other fake death certificates and they’re all just childish lies.

Related: The risks of war with North Korea in 2018

While relations between North Korea and the US and South Korea continue to defrost, a rift remains between Tokyo and Pyongyang. In his address the United Nations General Assembly in September of this year, Japan’s Prime Minister Shinzo Abe said he is “ready to break the shell of mutual distrust with North Korea” and meet face-to-face with North Korean leader Kim Jong-un. But Abe set one condition — that a meeting must lead to the resolution of this decades-old wound. Japanese citizens abducted by North Korea must be returned.

“For sure we are not saying that those who are really dead return to Japan,” says Hitoshi Tanaka, former deputy minister of foreign affairs who is known for engineering the 2002 summit between the leaders of Japan and North Korea that led to the return of five of the abducted Japanese. (Note: Tanaka is a senior fellow at the Japan Center for International Exchange, which supported the reporting for this story.) Shortly after the June 2018 meeting in Singapore between President Donald Trump and Kim Jong-un, Tanaka said what is needed is a thorough investigation into the whereabouts of all of the abductees.

“People in Japan say we cannot trust North Korea, that North Korea may come up with false information, right? In that case, we need to be doing that investigation as a joint exercise. We need to verify all those whereabouts of abductees,” Tanaka says.

North Korea opened an investigation in 2014 in exchange for the lifting of Japanese sanctions. Less than two years later, Pyongyang shut it down after Japan reinstated sanctions following a North Korean rocket launch.

“They are the ones who abducted our family members and they know exactly where these people are,” he says.

Yokota says the family members of the abducted Japanese aren’t diplomats and don’t have the ability to take military action. All they have, he says, is the power of words.

“I think this is something that anybody could understand. If something happened to your brother or sister or mother, you would do your best to rescue them,” he says. “For example, if you see somebody drowning in a pond right in front of your eyes, you would do something to help them. I think that is human and that is the strength and kindness of human beings.”

That’s why Yokota continues to tell his sister’s story and to visit Washington, DC, to enlist the help of US officials. He was even part of a delegation that met President Trump in November 2017. A few months before that meeting, during his 2017 speech before the UN General Assembly, Trump spoke about a "sweet 13-year-old Japanese girl" who was kidnapped by North Korea. That was the same speech when he called Kim Jong-un “Rocket Man.”

But Trump made no mention of the abductees during his speech at the UN General Assembly this September. He thanked Chairman Kim for his “courage” and for the steps he’s taken, adding that much work remains to be done.