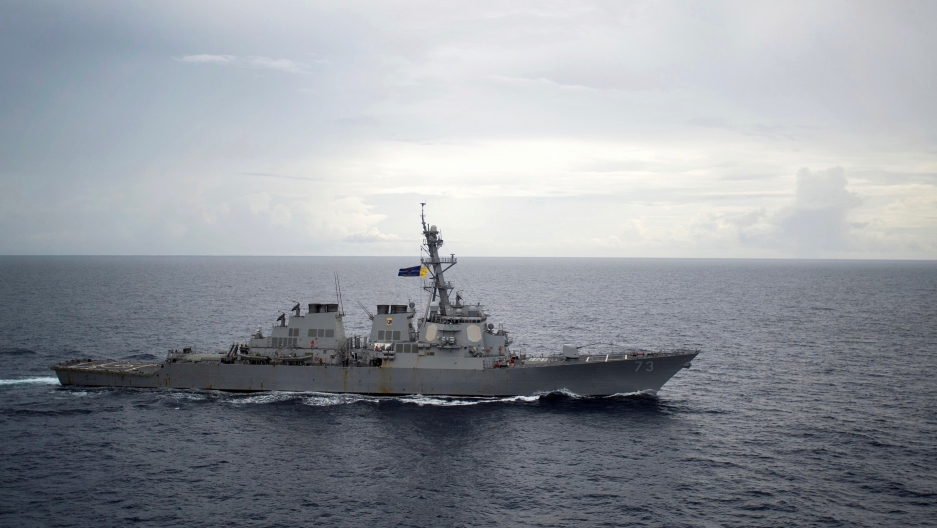 This is a 2016 photo of the guided-missile destroyer USS Decatur operating in the South China Sea. The ship was involved in a close encounter early this week with a Chinese warship, according to the US military.

The grainy surveillance photos look like something from the Cold War. But they were captured early this week, when a US Navy destroyer had to change course to avoid colliding with a Chinese warship somewhere in the South China Sea.

The images show two ships, apparently cruising next to each other at a dangerous distance of only 45 yards apart. Check out those photos.

It’s just the sort of incident that military strategists might use in a war planning scenario to explain how one thing can lead to another, and two world powers could quickly find themselves in a serious — even potentially nuclear — confrontation.

Related: The risks of a new Cold War between the US and China are real: Here's why

“That should be disturbing to people,” says professor Lyle Goldstein from the China Maritime Studies Institute at the US Naval War College in Newport, Rhode Island. “We had better be cautious and exercise judicious restraint.”

But Goldstein says it’s important not to get too carried away with all kinds of doomsday possibilities.

“Seeing warships in close proximity like that is very dangerous, for sure. It represents a lot of the tension that we see in the US-China relationship at this moment." But Goldstein says, “we don’t want to exaggerate the danger here.”

Goldstein is the author of a new book called, “Meeting China Halfway: How to Defuse the Emerging US-China Rivalry.”

The American ship involved in this week’s incident in the South China Sea was the USS Decatur. It was carrying out what the US military refers to as a “freedom of navigation operation.” Those missions are partly symbolic in nature, aimed at underscoring that the South China Sea is recognized under international law as a shipping lane open to vessels from all countries.

China considers most of the South China Sea to be sovereign Chinese territory. The US and China’s neighbors do not recognize those claims. In fact, Brunei, Malaysia, the Philippines, Taiwan and Vietnam all have made their own national claims to parts of these resource rich waters.

It may not be necessary for the US to halt freedom of navigation operations entirely, says Goldstein.

“We want to be a little careful,” he adds, with the frequency and the routes taken by US military aircraft and ships.

“If China were to undertake a program of freedom of navigation exercises, say, in the Caribbean, off the coast of Florida, or off the coast of Washington State, where we have some very sensitive military installations, of course that would make us rather upset and nervous.”

There is a more immediate risk here, though, according to Elizabeth Economy of the Council on Foreign Relations. She’s the author of “The Third Revolution: Xi Jinping and the New Chinese State.”

“This is not simply an issue between the United States and China. It is an issue of international law. The UK, France, Japan, are all undertaking similar freedom of navigation operations through the South China Sea.”

“These are disputed areas where the international court has ruled that China’s sovereignty does not extend,” Economy says.

The dispute is also about resources, fishing rights and offshore drilling rights. What has changed in recent years is that China has built artificial islands in the South China Sea and set up military outposts on them.

And China’s military is much more capable than it was several years ago, says Ely Ratner of the Center for a New American Security.

“China is not satisfied with business as usual and they’re trying to bend the rules and institutions of international politics toward their liking. And in that sense, the South China Sea is really a microcosm of China’s broader efforts to establish a sphere of influence in Asia,” Ratner says.

A Chinese foreign ministry statement this week warned the US against taking further, “provocative actions to avoid undermining China-US relations and regional peace and stability.”

Still, Jia Xiudong of the China Institute for International Studies told the BBC that there are many areas where the two sides can — and should — be working together.

Goldstein agrees. And he names North Korea as the most pressing issue that Washington and Beijing should be working on together. Then there’s climate change, the Middle East, Afghanistan and others, he adds.

The aftermath of the recent tsunami in Indonesia is yet another, Goldstein says.

“I would like to see the Chinese navy and the US Navy in a crisis response mode, where both navies are moving forces into the area where they can render aid, hopefully, side-by-side,” he says.

“That’s the kind of security architecture that I would like to see in the western Pacific that could deal with real problems, not haggling about rocks and reefs, and various legalistic definitions of different zones, but really helping people who are in need today,” Goldstein says.