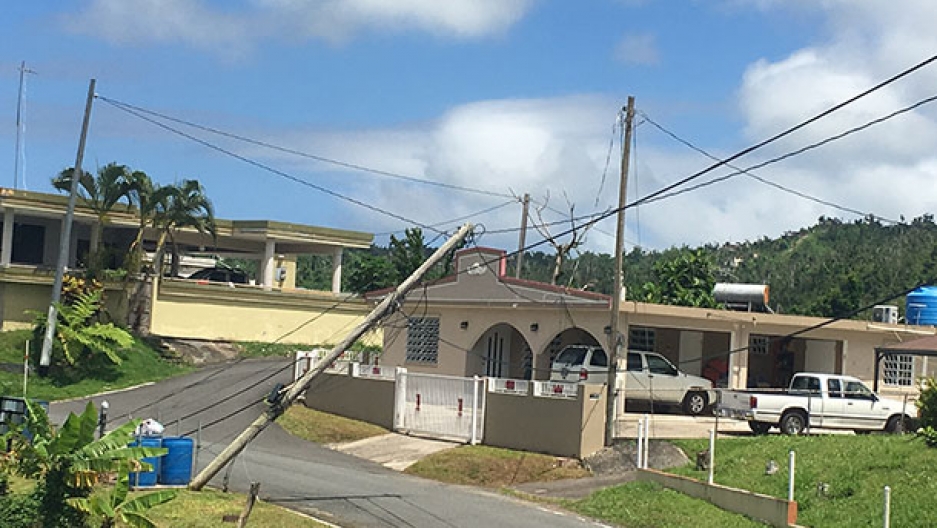 Months after Hurricane Maria, Puerto Ricans were still being injured and killed by falling trees and electrical poles.

When Christine Nieves and her family emerged from their home after Hurricane Maria struck, the forest outside their house looked like a giant chainsaw had come through, cutting the tops off everything and stripping the sides off the trees.

All over the island, communities like Humacao were isolated. FEMA and the government were slow to respond, so people turned to their neighbors for help.

Before the hurricane, the dense forest had in some cases blocked their view of each other. People might not know there was a house across the street or down the way. But after Maria turned the lush forest into match sticks, neighbors could see each other for the first time — and came to rely on one another.

“The people in this area started to understand that the government is not going to respond and save them, that it’s actually going to be their neighbors having the machetes ready, knowing how to disinfect a wound,” Nieves says. “That’s one of the things that they saw the most — wounds that could have been disinfected actually ended up in amputations. They had to cut off so many feet because people were wearing flip-flops in standing water that had infections and they didn’t have something like iodine or something easily [bought] over-the-counter disinfecting the wound at the right time.”

According to a recent report, the hurricane caused nearly 3,000 deaths. Most of these deaths were not from wind and rain, however, but from the isolation that followed the storm. Cut off from the outside world, many people died from treatable infections, unsafe water and accidental electrocution.

Nieves is the director of Proyecto Apoyo Mutuo (the Mutual Aid Project), based in a community center at the very top of a mountain in Humacao. She says residents of the island now understand that education, preparedness and community organizing will be necessary to prepare for the next hurricane.

Most of the residents of Humacao are older — retirees who live alone and have been without electricity since the hurricane. At the home of Gloria Vasquez, a downed electrical wire grazes the top of a car parked in front of her house.

Vasquez is 70. She lived most of her life in the Bronx, where she worked for 50 years, mostly as a hair dresser. She saved her money all those years to retire in her native Puerto Rico. She bought a three-bedroom cement house that sits on the side of the mountain overlooking a valley.

Before the hurricane, Vasquez says she could see only the dense forest in her yard and an avocado tree taller than her house. Now, she can see clear to the ocean some 40 miles away. She says she couldn’t have imagined that Puerto Rico could ever look like this. Vasquez has accepted her lost trees and the broken landscape, but she’s still struggling to deal with day-to-day life, living alone without electricity.

“It’s hard,” she says. “Sometimes I sit there and I cry because I need the light, you know? I don’t have a fridge to cool my stuff. I have diabetes and I need to put my insulin in the fridge.”

A woman named Sandra, who lives in her neighborhood, gave Vasquez a key to her house and lets her keep her medication in her refrigerator. Sandra has a generator.

Like Gloria Vasquez and Sandra, locals are looking to each other for solace and sustenance amidst the isolation and destruction. At the mountain-top community center in Humacao, half a dozen older women gather every week, Monday to Friday, to cook for their neighbors.

A sign out front indicates when they’ll be cooking and says, “Aceptamos donativos solidarios — we accept solidarity donations.” For $5, anyone can buy a homemade lunch of rice, beans and meat and maybe some fruit, if one of the ladies has extra papaya or pineapple coming up at home.

A woman named, ironically, Maria says coming here to feed the community is a type of therapy for her. She gets out of her lonely, dark house for the day and cooks with her friends. They chat about family and argue like sisters. Life feels normal again.

This theme of resilience and working together is everywhere in post-Maria Puerto Rico. About nine months after the storm, a local musician named Hurray for the Riff Raff produced a song called “Pa’lante,” in part about recovery on the island. The music video shows scenes of a hurricane-ravaged community and tells the story of a young family trying to work through it.

Pa’lante is truncated from the Spanish phrase “para adelante," which literally means “move forward,” but Christine Nieves says it means much more than that now.