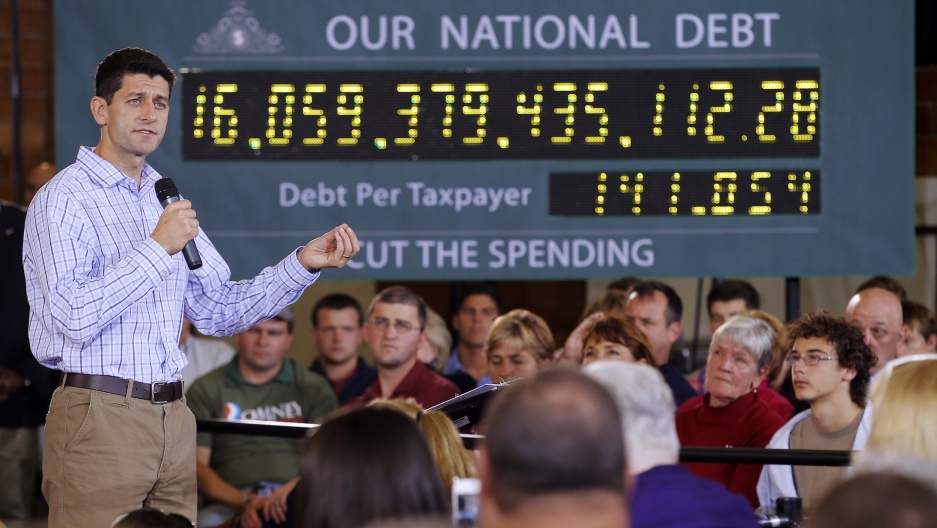 The new trade deal between the US, Canada and Mexico brings more certainty to the US economy and that's a good thing. But here’s something to worry about: estimates from the Congressional Budget Office show that Washington is borrowing a lot money — we're talking off-the-charts borrowing by historical peacetime standards.

According to the CBO, in just a few years the US will be paying more in interest to pay down the national debt than on the military or Medicare.

A few years ago, when the Republican Party didn’t control all the reins of government, deficit hawks like Congressman Paul Ryan were nearly constantly banging the drum on the perils of a rising US debt.

When Donald Trump campaigned for president, he promised to balance the budget and to chop down the debt.

But once President Obama was out and President Trump was in, that's not what happened. Under President Trump and House Speaker Ryan, spending has increased, and the Republican tax cuts have blown a bigger hole in the budget.

Today, the US debt sits at $21 trillion — a huge scary figure, but also kind of meaningless by itself. Economists study what’s called the debt-to-GDP ratio — how much a country owes vs. how much it generates.

Germany, France, Mexico, Argentina, Mongolia ... they’re all carrying a smaller debt-to-GDP ratio than the US. The US now has the 10th highest debt-to-GDP ratio, sandwiched between Bhutan and Jamaica. And the US is carrying its heaviest debt load since World War II, when the country increased spending to finance the war. (Note: These figures reflect "government gross debt," which includes intragovernmental debt, essentially what we owe ourselves. This chart also contains government net debt, which most economists prefer to give a truer picture, but net debt is not available for all countries to make comparisons.)

Economists say when you’re in a time of recession, it’s the time to spend to get the economy going again. When the economy is roaring along, as it is now, it’s a good time to pay down your loans.

“The Republican Party used to be, outside of the national defense area, sort of the party of spending restraint. But they no longer are. You don’t hear anything about spending restraint from the major Republican leaders,” said Chris Edwards, director of tax policy studies at the Cato Institute, a think tank in Washington dedicated to the principle of limited government.

“The fact that we are in the 10th year of an economic expansion now and debt keeps rising is really extraordinary and very irresponsible. Unless Congress fundamentally changes its path, we are headed for a Greek-type crisis.”

But what exactly could that mean?

“A rising debt could create this crisis situation where interest rates spike, the government has to take drastic actions, perhaps cutting benefits, social security and other benefits radically, or hiking taxes dramatically, which will damage the economy,” said Edwards.

But a Greek-style crisis, social unrest, people taking to the streets as their savings evaporate … Could that happen in the United States of America?

Marc Goldwein — senior policy director with the nonpartisan think tank, the Committee for a Responsible Federal Budget — doesn’t see the US as the next Greece, but he does think the US should be paying more attention to the debt.

“One of the scary things about debt is we probably won’t know we’re too deep in debt until it’s too late,” he says. “I don’t think we’re heading for a Greek-like crisis because unlike Greece, we borrow in our own currency and we can actually make our own currency. But I do believe that our current path is unsustainable. And I do believe that if there isn’t a course correction, at some point, we will face a financial crisis. We will actually potentially create a global financial crisis.”

Jason Furman at Harvard doesn’t think either of those scenarios — a Greek-style crisis or a global financial crisis — is likely to occur because the US is carrying too much debt. He served as chair of President Obama’s Council of Economic Advisers and says the debt should’ve never been our top priority in the first place, “but I don’t think it should drop off the list of concerns entirely either.”

When it comes to the United States debt right now, he says he subscribes to the termite in the woodwork theory: “That every year they chip away at your prosperity a little bit and leave you a little bit worse off."