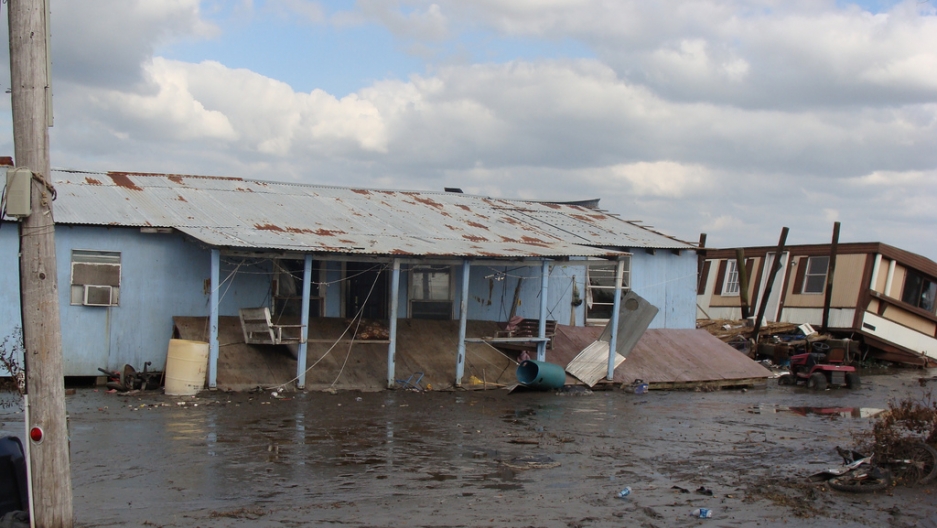 The Isle de Jean Charles off the coast of Louisiana has lost more than 90 percent of its landmass in the last 50 years. The Native community living on the island became the country’s first climate refugees, forced in 2016 to leave their flooded homes.

Many Americans would like to believe that climate change is a problem of the future. But as ocean levels rise, coastal communities from Louisiana to Staten Island to Pensacola, Florida are contending with higher floods, stronger hurricanes and saltwater intrusion. Some are even being forced to retreat to higher ground.

Writer Elizabeth Rush set out to document some of the stories of people caught in these rising tides in her new book, "Rising: Dispatches from the New American Shore."

“I wanted to write this book from their perspective,” Rush says. “To go on the ground in coastal communities, specifically in the United States, and to ask folks living on the front lines of sea level rise, ‘What is it that woke you up to this reality and what are you doing to rise to the challenges that it presents?’"

Rush says that when she started writing “Rising,” she had the idea that coastal communities were typically affluent areas, but this is only partially true. In fact, she says, many of the places now flooding due to sea level rise sit on top or alongside of tidal wetlands, “which have long been viewed as wastelands … unfit for human development.”

These are some of the last places to get developed and housing prices often are lower because flooding problems already exist. These areas, where flooding has worsened nearly every year, are often lower-income communities of color.

“Pensacola, Florida, was tidal wetlands, swampy marshland, and it was one of the main destinations that runaway slaves sought out,” Rush explains. “Part of the reason they [did] was because those wetlands acted as a sort of invisibility cloak. Wetlands are easy to defend and difficult to attack, and the land itself tends to not be very coveted. … Some of the people who are feeling the ocean’s gathering force now are those who have historically been economically and socially disadvantaged in this country."

While researching and writing the book, Rush became friends with Chris Brunet, a resident of Isle de Jean Charles, about an hour and a half southwest of New Orleans. The coast of Louisiana is losing ground at a stunning rate, Rush points out. Since around 1950, an area in size equal to the state of Delaware has disappeared underwater.

The Isle de Jean Charles has lost over 90 percent of its landmass in the past 50 years. It is inhabited by a group of people who are Biloxi, Chitimacha, Choctaw, and Acadian — indigenous groups that were displaced when they fled colonial violence and “ended up on the soggy fringes of the state of Louisiana, in part because that land wasn't necessarily that desirable to begin with,” Rush says. “They've lived there for a couple of hundred years.”

In 2016, Rush saw a front-page headline in The New York Times that referred to the United States' "first American 'climate refugees.'” It was a story about the island and a $48 million grant it had received to relocate as a group. Rush called Brunet and asked, “Are you leaving?” “I can still hear his voice in my mind,” Rush says. “He said, ‘We're not celebrating, but we are going.’”

In photographs from his childhood, Brunet’s home is surrounded by pasture. Cows are grazing and his mother is growing okra, cantaloupe and persimmons. Now, 50 years later, due to sea level rise and other compounding factors, the land has disappeared under the tide.

Rush visited the island a couple of months later and says the realization that “this land was really going to disappear and that the human history of folks living in it wasn’t going to be grounded in that place anymore” totally changed her perspective.

Rush heard about a similar scenario that was playing out in a community named Oakwood Beach on the eastern coast of Staten Island, an area profoundly devastated by Hurricane Sandy. Months after the storm, Oakwood Beach began a public campaign to have the state use disaster recovery funds to purchase and demolish their homes. “They didn't feel safe living there any longer,” Rush says. “They had been flooding worse and worse, year after year.”

Rush cautions that her focus on low-income communities shouldn’t give a false sense of comfort to affluent communities who think money can help them escape the rising tides or delay the pain past their lifetimes.

While it’s true, she says, that, “if you have enough money, you can build up on stilts, you can pay for the insurance, you can sort of build a buffer around yourself that might make you seem lifted above that vulnerable position, both metaphorically and physically, the reality is those homes are deeply dependent upon all of the different kinds of infrastructure that service them — roadways, gas pipelines, electric lines and telecommunication lines.”

Miami Beach, for example, is spending hundreds of millions of dollars on sea level rise-ready infrastructure, installing flood pumps and raising roadways. But that largely wealthy community is, “in ways that we don't often pay attention to, deeply linked to many of the surrounding communities, as well as to the lower-income communities and the working-class communities,” Rush points out.

“Those folks … work in the public sector; they are sanitation workers, they work in the hotels, they work in the restaurants,” Rush says. “I think that the idea that we can just lift the wealthy above the high tide line and nothing will change is just fundamentally flawed. We are all in this together and the sooner we can wrap our heads around that the better, I think.”