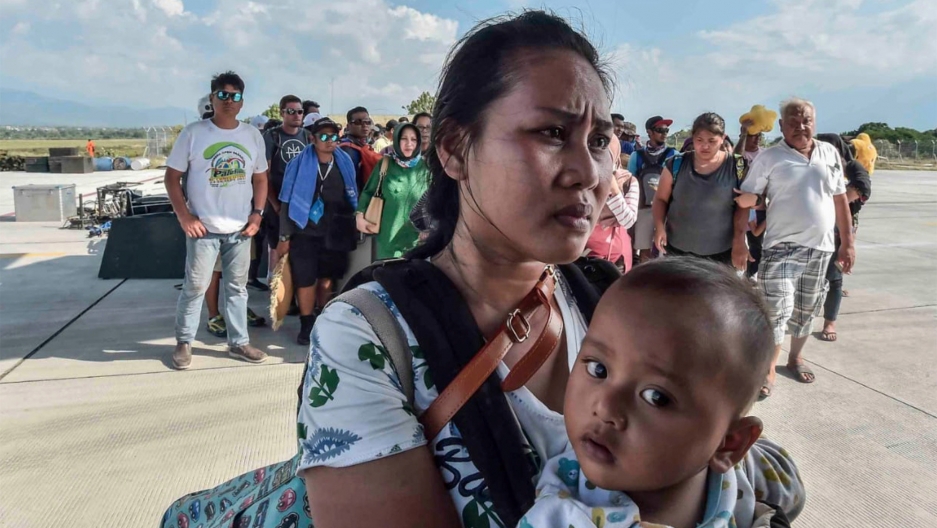 People injured or affected by the earthquake and tsunami wait to be evacuated on an air force plane in Palu, Central Sulawesi, Indonesia, Sept. 30, 2018.

The toll from an earthquake and tsunami in Indonesia soared on Sunday to 832 confirmed dead, with authorities fearing it will only climb as rescuers struggle to reach outlying communities cut off from communications and help.

Dozens of people were reported to be trapped in the rubble of two hotels and a mall in the city of Palu, which was hit by waves as high as six meters (20 feet) following the 7.5 magnitude earthquake on Friday.

A woman was pulled alive from the debris of the city's Roa Roa Hotel, where up to 60 people were believed trapped. Hundreds of people gathered at the wrecked mall searching for loved ones.

With most of the confirmed deaths from Palu, authorities are bracing for much worse as reports filter in from outlying areas, in particular, Donggala, a region of 300,000 people north of Palu and close to the epicenter of the quake, and two other districts. 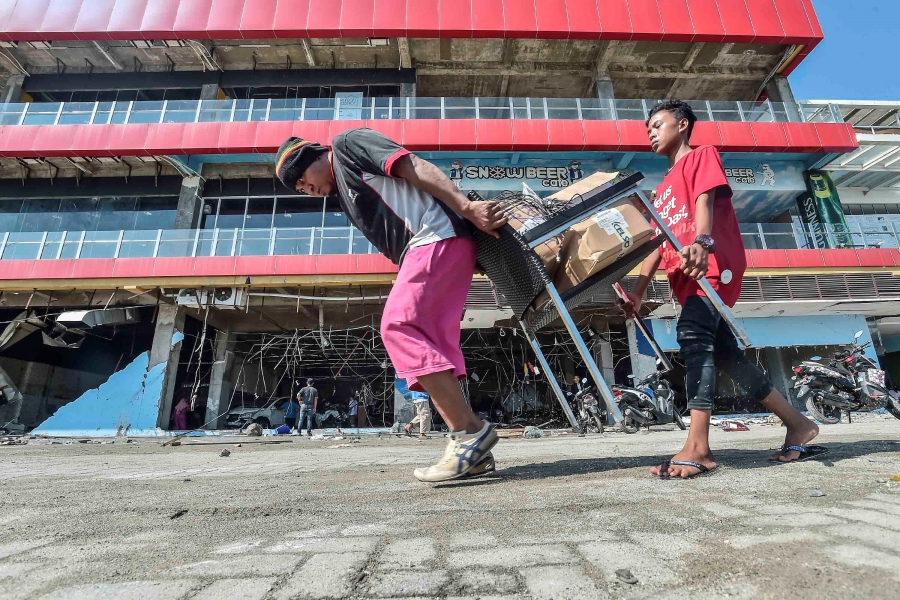 People carry away goods from a shopping mall following an earthquake and tsunami in Palu, Central Sulawesi, Indonesia Sept. 30, 2018 in this photo taken by Antara Foto.

Vice President Jusuf Kalla said the toll could rise into the thousands.

President Joko Widow visited a housing complex flattened when the quake liquefied the soil it stood on, and called for patience.

"I know there are many problems that need to be solved in a short time, including communications," he said. 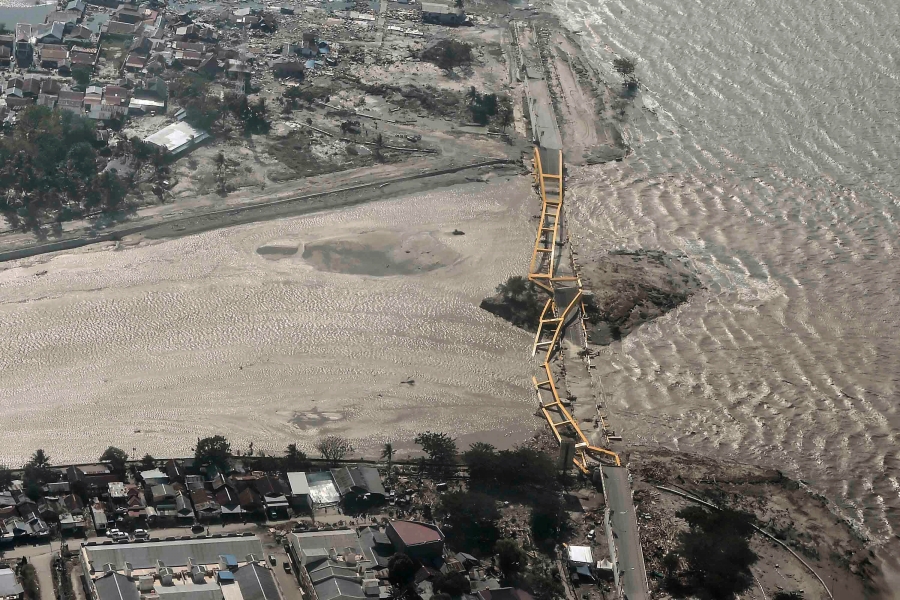 The ruins would be rebuilt, he said, as aftershocks rattled the region 48 hours after the quake.

Scores of residents shouted "we're hungry, we need food" as soldiers distributed rations from a truck in one neighborhood, while elsewhere television showed pictures of people making off with clothes and other items from a wrecked mall.

Internal Affairs Minister Tjahjo Kimono, asked about reports of sporadic looting, said he had ordered authorities to help people get food and drink and businesses would be compensated.

A spokesman for the National disaster mitigation agency,  Stop Purwo Nugroho, told a news conference that the affected area was bigger than initially thought, and rescuers only had good access to one of four affected districts — Palu. 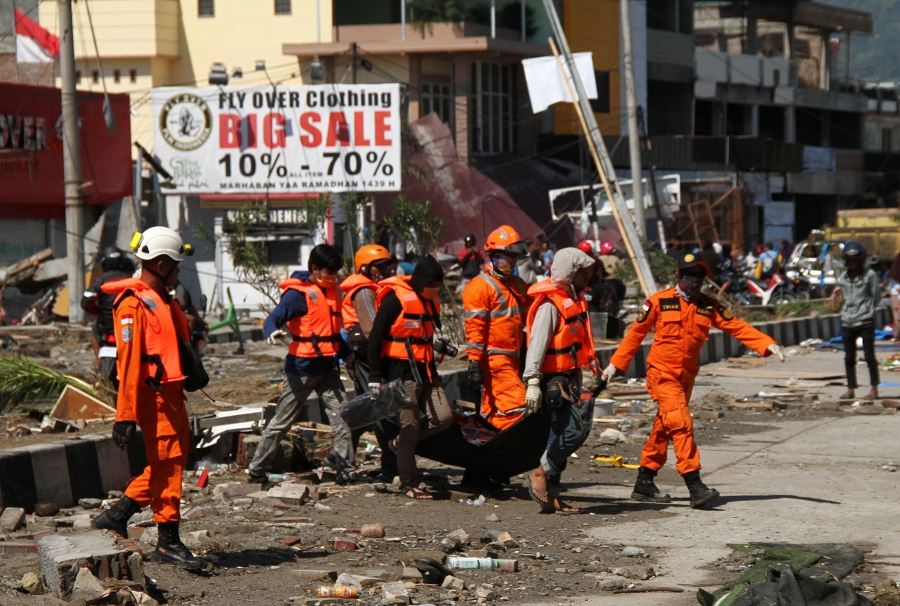 "We haven't received reports from the three other areas. Communication is still down, power is still out. We don't know for sure what is the impact," he said.

"There are many areas where the search and rescue teams haven't been able to reach," Nugroho said, adding that teams needed heavy equipment to move broken concrete and debris.

Donggala town has been damaged badly, according to a reporter on the scene.

Five foreigners — three French, one South Korean and one Malaysian — were among the missing, Nugroho said. The 832 dead included people crushed in the quake and swept away by the tsunami.

About 16,000 displaced people needed clean water, Nugroho said, while 540 were injured, many getting treatment in tents.

Indonesia, which sits on the seismically active Pacific Ring of Fire, is all too familiar with deadly earthquakes and tsunamis. In 2004, a quake off Sumatra island triggered a tsunami across the Indian Ocean, killing 226,000 people in 13 countries, including more than 120,000 in Indonesia. 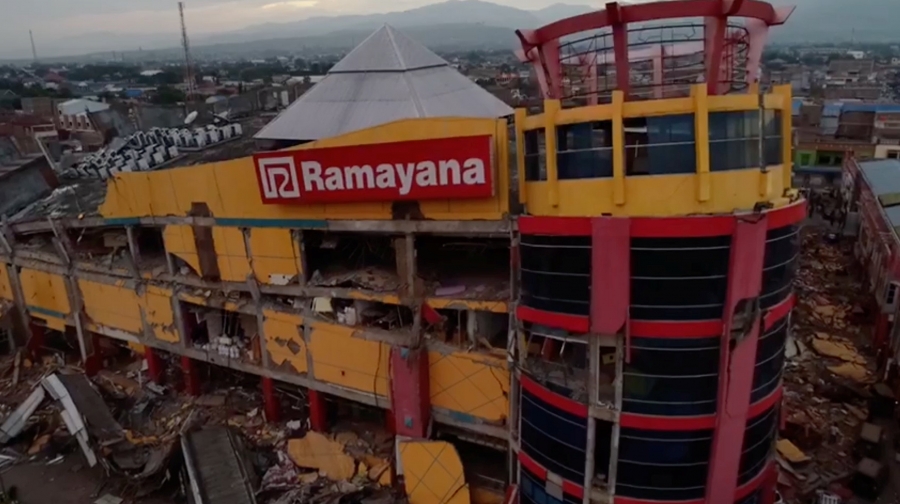 The damage after an earthquake is seen in Palu, Central Sulawesi Province, Indonesia Sept. 29, 2018 in this still image taken from a video obtained from social media.

Questions are sure to be asked why warning systems set up after that disaster appear to have failed on Friday. Nugroho, bemoaning a fall in funding, said no tsunami buoys, one type of instrument used to detect the waves, in Indonesia had been operating since 2012.

The meteorological and geophysics agency BMKG issued a tsunami warning after the quake but lifted it 34 minutes later, drawing criticism it had been too hasty. But officials estimated the waves had hit while the warning was in force.

Hundreds of people had gathered for a festival on Palu's beach when the water surged. A disaster official said the tsunami traveled across the sea at speeds of 800 kph (500 mph).

Video on social media showed water bearing whirls of debris rushing in as people shouted in alarm and scattered. 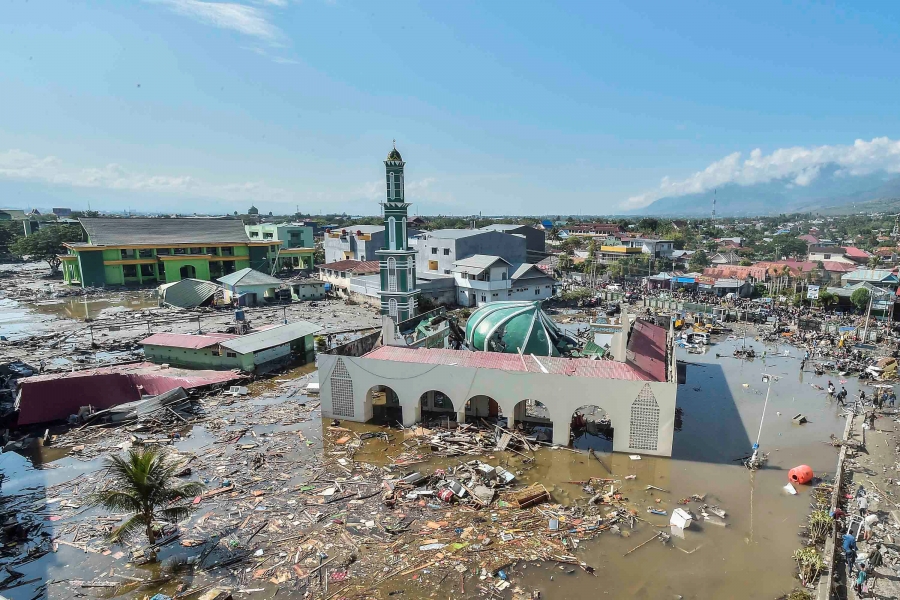 An aerial view of the Baiturrahman mosque which was hit by a tsunami, after a quake in West Palu, Central Sulawesi, Indonesia Sept. 30, 2018 in this photo taken by Antara Foto.

Palu is at the head of a bay, about 10 km long and 2 km wide, which had "amplified" the wave as it was funneled toward the city, a geophysics agency official said.

Questions have been raised about what caused the tsunami, with speculation an underwater landslide was to blame.

The BMKG said its closest tidal gauge sensor, about 200 km (125 miles) from Palu, had only recorded an "insignificant," 6 cm (2.5 inches) wave, while researchers said it was surprising the "strike-slip" quake, when tectonic plates move horizontally rather than vertically, had generated a tsunami.

"It may be that the shock of the quake triggered a landslide underwater," Abdul Muhari, who heads a research team advising the government, told Reuters.

Palu's airport was damaged in the quake, but had reopened for limited commercial flights, authorities said.

Neighbors including Australia, Thailand and China offered help and Pope Francis, speaking to thousands in St. Peter's Square, said he was praying for the victims.

Indonesia has the world's largest Muslim population but also significant pockets of Christians, including on Sulawesi. 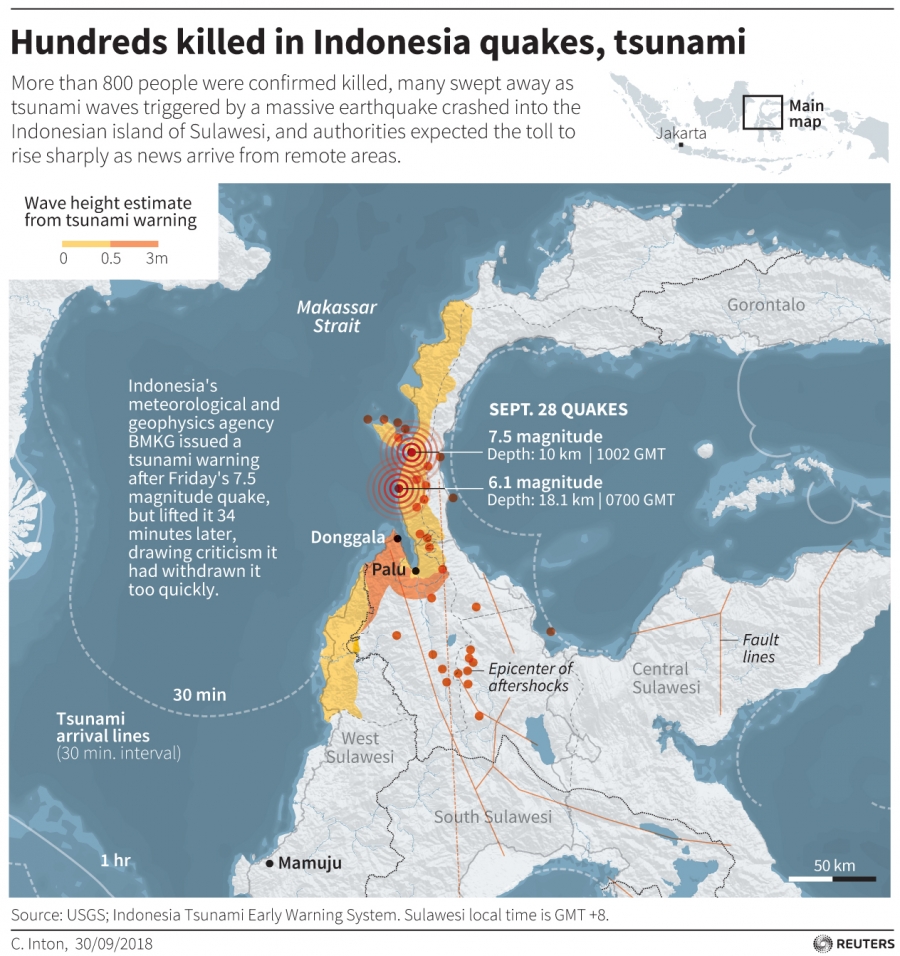