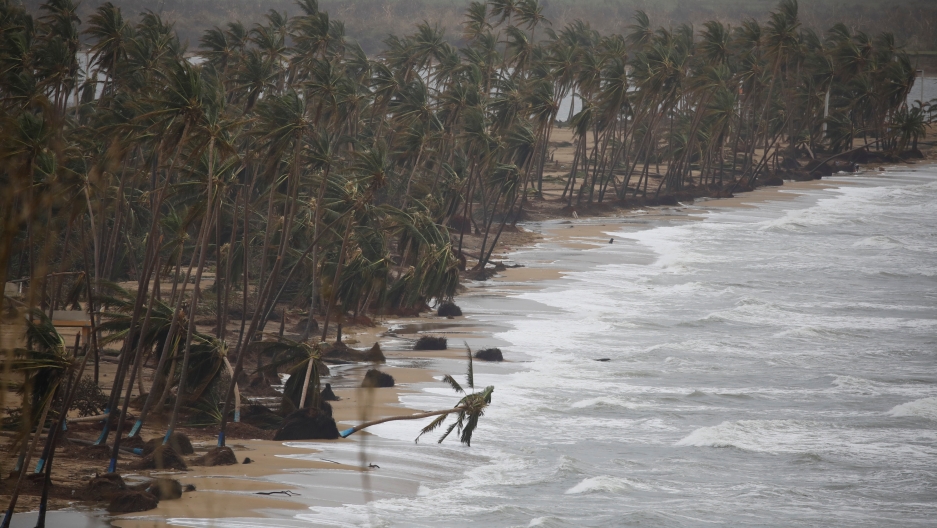 Broken palm trees are seen after the area was hit by Hurricane Maria in Yabucoa, Puerto Rico, Sept. 22, 2017.

When Hurricane Maria struck Puerto Rico in 2017, the direct hit turned a green island brown. Vast areas of forest were stripped of their leaves and branches. From mangroves to cloud forests, every ecosystem on the island was devastated by the massive storm.

NASA scientist Doug Morton had a bird’s-eye view of the effects of the storm on the island’s tropical forests, with cameras from the Goddard Space Flight Center. “It’s almost like you took a tropical rainforest and you turned it into a New England woodland in December, because you stripped all of the leaves off almost all of the trees,” Morton says. “The canopy literally went from green to brown.”

Related: This Puerto Rican town rebuilt after Maria but it's still not ready for another storm

But there is also good news. Forests that evolved in the hurricane belt have ways to cope and are slowly coming back.

El Yunque National Forest is a gold mine of scientific research. Government scientists, like biologist Maria Rivera, have been maintaining research plots here for decades. She has been visiting El Yunque once a week to collect data for the last 18 years. But she says she was shocked when she first saw the forest after the hurricane went through.

“My first reaction was a bomb [had gone off] inside the forest,” she says.

Most of the park is still closed to visitors and many roads remain impassable, with branches and tree limbs scattered about. Some deforested hillsides are still unstable. The ground is bare except for rocks and dead trees. Everything is brown, twisted and gnarled or pulled out from the ground. It almost looks like a forest fire went through.

At the very top of Luquillo mountain, in a cloud forest some 3,500 feet above sea level, the temperature is at least 20 degrees cooler than just a mile or so down the mountain. The forest has an ethereal quality. Wispy clouds settle around the trees like a damp blanket.

This area gets upwards of 200 inches of rain a year and is typically dripping with life. Rivera says that before the hurricane struck, nearly every surface in this forest was covered with moss and epiphytes growing in the crook of trees. Today it is nearly bare.

But recovery is how nature works, Rivera says.

The short, stout trees evolved to cope with high winds at the top of the mountain. They were a small target to begin with; when the hurricane blew through, they simply dropped their leaves and weathered the storm. Very few trees here were actually uprooted and killed.

Still, when Rivera came here about six months after the hurricane, she says she was stunned to see how the trees had responded. All the trees had flowers, she says. “It was very pretty. Not many leaves, but when I saw the flowers, I said, ‘Wow, this is great!’”

All across the island, trees set flowers and fruit outside their usual season. It’s a stress response and a survival mechanism to pass on their genes. In a closed-canopy forest, the competition for sunlight can be fierce. After a hurricane opens new space, however, trees are in a race to drop seeds and fill that vacated spot.

Just a few minutes down the mountain is the palm area — a completely different ecosystem. From above, the closed canopy of a tropical forest typically looks a bit like broccoli from above. This forest looks more like spears of asparagus. The trees have mostly grown their leaves back, but they are skinny, with very few branches.

Maria says that’s how the palm trees were able to survive the hurricane. Because palm trees have no branches, the hurricane winds just passed through the skinny palm trees. But if a palm loses the branches at the very top, it dies, which is what happened to about 50 percent of the trees on the island. They were decapitated. The dead trees still standing look like matchsticks.

Five minutes further down the mountain is yet another ecosystem, called a tropical dry forest. Here, temperature are much hotter than up in the cloud forest. Many of the tree trunks in these forests were twisted out of shape by Maria’s high winds. Yet the area is turning green again. There are new branches, new leaves. “The recovery was very fast here,” Rivera says.

During the storm, the old, weak branches broke off, but healthier parts of the trees stayed intact and their leaves have quickly grown back.

Mangroves live at the salty edge of the sea. They thrive in saltwater and are designed to withstand strong winds, so researchers were surprised to see that nearly all of the mangroves looked dead after Hurricane Maria came through. Those biologists surmise that the saltwater and sand blown against the mangroves had essentially burned all the leaves and branches.

But mangroves evolved to live in this harsh coastal environment in a region prone to hurricanes. In fact, some green shoots poke out from around the base of a tree that seems dead. “Not all are dead,” Rivera says. “They continue.”

The mangrove forest was the most devastated ecosystem on Puerto Rico, but given enough time, it will recover. And since no other plant can easily grow in this harsh ecosystem, they have no competition. Indeed, adding to the shoots on existing trees, a carpet of foot-tall mangrove saplings covers the sandy ground.

The recovery of Puerto Rico’s forests shows the value of a long-term study. Ariel Lugo, director of the International Institute for Tropical Forestry, says hurricanes can have both positive and negative effects on an ecosystem. Forest regrowth is exceptionally high following a devastating hurricane.

“The productivity of the forest right now is higher than it was before the hurricane,” Lugo says. “The first five years after Hurricane Hugo was the fastest primary productivity that we've ever measured in the forest.”

Lugo worries, however, about the slow pace of the mangrove recovery — specifically, that they likely won’t be there when the next hurricane strikes.

In the long term, Lugo thinks the storm will be a recalibration. Fit plants and animals will survive. Older, weaker, less adapted and invasive species will not. He estimates that the forests will need roughly 60 years to recover completely.

The impacts of the hurricane raise enough questions to keep scientists like Maria Rivera busy for decades. But, for Rivera, her work is more than just collecting data. She says seeing the devastation of the forest she knows so well was difficult at first.