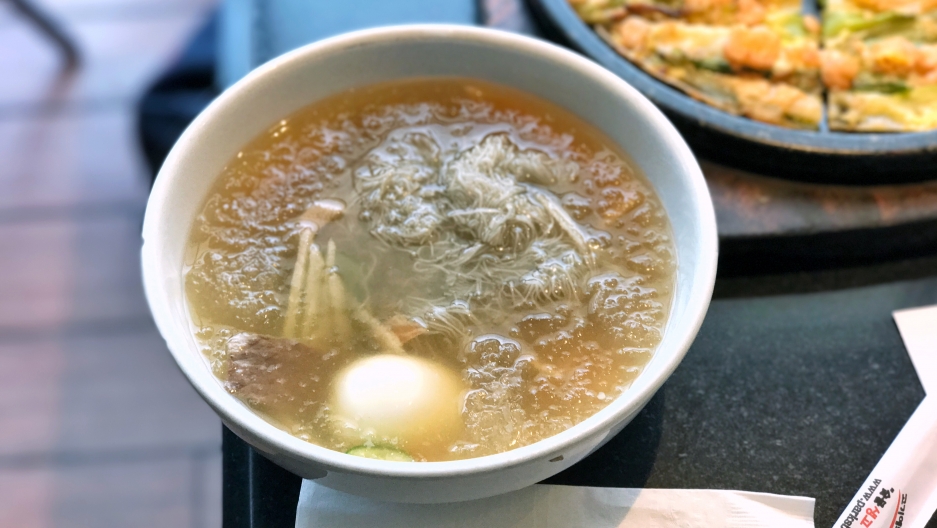 When North and South Korean leaders recently held their third summit in Pyongyang, Kim Jong-un’s nuclear weapons weren’t the only items on the table.

President Moon Jae-in was treated to a lunchtime banquet that included a local culinary favorite — a bowl of buckwheat noodles submerged in a chilly, savory broth called naengmyeon. South Korean media credits the dish, which literally means "cold noodles," with helping create a “convivial” atmosphere between the two men, whose countries appeared on the brink of war just a year ago.

Naengmyeon has unexpectedly become a staple of the peace-building process on the divided peninsula.

Moon and Kim dined on a Pyongyang-style version of the cold noodle soup during their first encounter last April on the southern side of the demilitarized zone. The North Korean ruler even brought a noodle-making machine with him to the summit.

Images of the leaders sharing naengmyeon sparked a surge in customers lining up at the doors of noodle restaurants in South Korea during the spring. Ri Sol-ju, the wife of Kim Jong-un, reportedly told President Moon and First Lady Kim Jung-sook that naengmyeon has also gained more popularity in North Korea thanks to the renewed inter-Korean dialogue.

Some Korean restaurants in the United States might also have benefited from naengmyeon’s diplomatic exposure.

“It was good advertising,” the 69-year old naturalized US citizen said, joking that he should thank the North Korean dictator for the help.

Cho explains that naengmyeon made its way to South Korea during the Korean War in the early 1950s when hundreds of thousands of northern refugees resettled south of the border. They went on to open restaurants that specialized in either the Pyongyang or Hamhung style of the dish. (The Pyongyang-style is buckwheat noodles served in beef broth. The style in Hamhung, North Korea’s second largest city, is sweet potato noodles in a pepper sauce.)

The noodles are now a popular summertime meal in South Korea, even though naengmyeon was originally served during winter.

Cho says, regardless of the potential business gains, he’s glad the cold noodles played a part in the talks between Kim and Moon, adding that he believes the Koreas are finally moving toward peace. But he cautions that all could be lost if Kim does not relinquish his nuclear weapons as he’s pledged to do.

“I think Donald Trump would attack North Korea,” said Cho, who runs two other naengmyeon restaurants in New York City. “I don’t think Kim has any other choice but to give up his weapons.”

President Trump said this week that plans to hold another summit with the North Korean leader are in the works.

“We’ll be having a second summit with Chairman Kim in the not too distant future,” the president said on Monday in New York during talks with Moon.

Both Trump and Moon are attending the United Nations General Assembly where, a year ago, Trump called Kim “rocket man” and threatened to “totally destroy” North Korea.

In June, a historic meeting between Trump and Kim was held in Singapore, prompting the US leader to declare via Twitter that “There is no longer a nuclear threat from North Korea,” a claim that he later walked back. But last month, Trump called off what would have been Secretary of State Mike Pompeo’s fourth trip to Pyongyang due to what he said was a lack of progress in the regime’s denuclearization.

While speaking to reporters at UN Headquarters, Trump said a venue for a second summit with Kim has not been selected.

Kim is not expected to attend the General Assembly. No North Korean ruler has ever come to the United States.

Restaurant owner Cho says he thinks Kim should eventually make the trip to the US. And even though Trump once said he’d like to have a burger with Kim, Cho thinks North Korean cold noodles could be a good menu option instead.

Cho says he thinks Trump would enjoy the dish and it would be a “good gesture” if he can at the very least pretend that he likes naengmyeon.