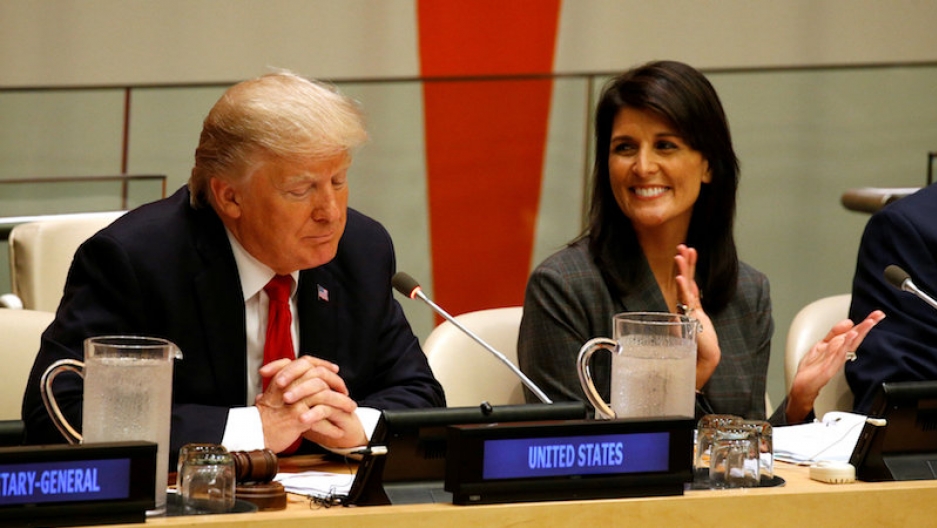 US Ambassador the the UN Nikki Haley applauds as US President Donald Trump speaks during a session on reforming the United Nations at UN Headquarters in New York, September 18, 2017.

Since US President Donald Trump made his debut at the United Nations a year ago pushing an "America First" policy, he has quit the Iran nuclear deal, the UN Human Rights Council and lashed out at some of the closest allies of the United States.

Next week at the UN, Trump plans to stay on message, touting his drive to protect US sovereignty before world leaders, some of them worried about America's commitment to the multilateralism that has governed the United Nations since the end of World War II.

"It is not saying multilateralism can't work. But it's saying sovereignty is a priority over all of that," US Ambassador to the UN Nikki Haley said in describing Trump's address on Tuesday at the annual UN General Assembly.

"All of these things that we felt like were mandating things on the United States, those aren't things we want to be involved in," she said, citing the Paris climate agreement Trump pulled out of in 2017 and global talks on a migration pact that Washington quit before they started.

In the past year, the United States has also left the UN cultural agency, cut funding for the UN agency that helps Palestinian refugees and sparked a trade war with China. At the NATO summit in July, Trump threatened that the United States would "go its own way" if members did not spend more on defense.

Trump is now surrounded by hawkish advisers more in tune with his world view, such as Secretary of State Mike Pompeo and National Security Adviser John Bolton, after the departure of their "globalist" predecessors Rex Tillerson and H.R. McMaster, along with former White House economic adviser Gary Cohn.

While some leaders and diplomats have voiced concern about the future of multilateralism since Trump took office in January last year, they rarely name and shame.

"I don't like to personalize things," UN Secretary-General Antonio Guterres told reporters this week when asked if Trump was a threat to multilateralism.

Haley said Trump would "lay down a marker" on US foreign aid.

Trump has long been skeptical of the value of the United Nations, though Haley told Reuters that she has shown him the world body's worth by pushing the Security Council several times to toughen sanctions on North Korea.

The Trump administration now has its sights on Iran, but a bid by Washington to use the United Nations to call out Tehran over accusations of meddling in the Middle East has failed. In May, Trump pulled Washington out of a 2015 international agreement to put controls on Tehran's nuclear program in exchange for some sanctions relief.

Trump is set to chair a UN Security Council meeting on nonproliferation of weapons of mass destruction on Wednesday that will allow him to attack Iran and flaunt the latest developments in his attempt to get North Korea to denuclearize.

A senior UN diplomat, speaking on condition of anonymity, described the approach of the Trump administration to several foreign policy issues during the past year as "if you want things to change, you've got to cause trouble."

"Throw the pieces up in the air and see where they land. And the president is quite masterful at claiming victory, even if the pieces, when re-arranged look a lot like the pieces did before they were thrown up in the air," the diplomat said.

One such issue, say diplomats, is North Korea. Last year, Trump drew gasps by threatening from the UN podium to "totally destroy" North Korea. Now he is talking to leader Kim Jong Un.

While there have been some gestures of goodwill by the reclusive Asian nation, including the release of US prisoners and return of the remains of American Korean War dead, Pyongyang has not yet taken steps toward denuclearization.

North Korea's Foreign Minister Ri Yong-ho is due to speak at the UN on Sept. 29. Haley said Ri and Pompeo had agreed to meet but it had not yet been confirmed if that would happen on the sidelines of the gathering.

Trump is planning to meet privately with the leaders of South Korea, Egypt, France, Israel, Japan, and Britain.

French President Emmanuel Macron, who has a close relationship with Trump, will stress the importance of "collective action" and multilateralism when he addresses the United Nations shortly after Trump on Tuesday.

"We don't see it as two opposing dialogues," a French presidential source said. "We will continue to encourage the US to join this multilateralism even if it's difficult on some subjects like trade, Iran or climate."