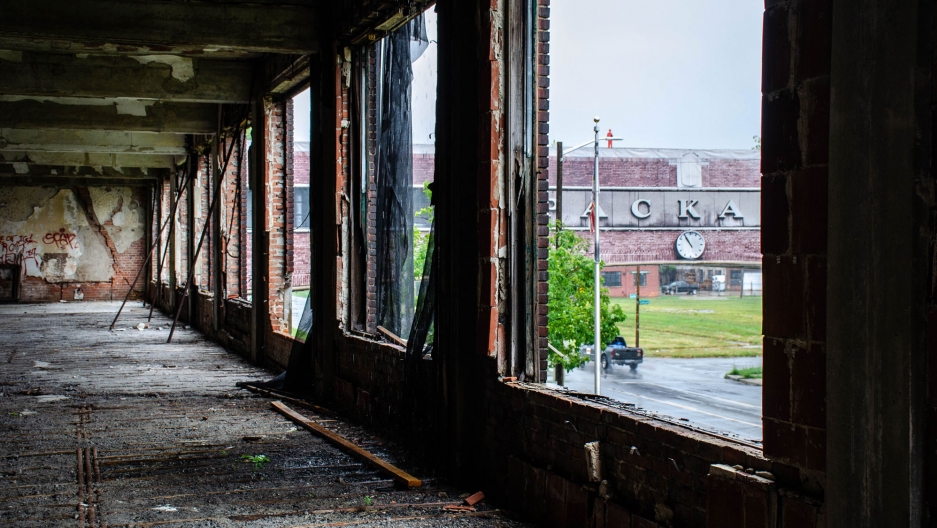 The old Packard Plant on Detroit’s east side has sat abandoned and neglected for decades, one of the city’s icons symbolizing Detroit’s former economic might and subsequent decline.

The group Pure Detroit gives tours of the city’s gleaming landmarks. And its skeletons. That includes the former Packard factory — 43 abandoned buildings on Detroit’s east side, sprawling shells of concrete with graffiti and rubble. Think: Mad Max or a bombed-out city.

“That's why so many movies are filmed here, because it has that sort of post-apocalyptic look,” said Jacob Jones, who regularly gives tours with the company Pure Detroit.

In its heyday a century ago, a Packard automobile meant luxury. And the company wanted a factory to reflect that.

“They bring in the architect Albert Kahn to develop this new form of steel reinforced concrete," Jones explains, walking between buildings at the Packard Plant.  "At its peak, the Packard Plant occupied more than 4 million square feet and had over 40,000 people working on site.” 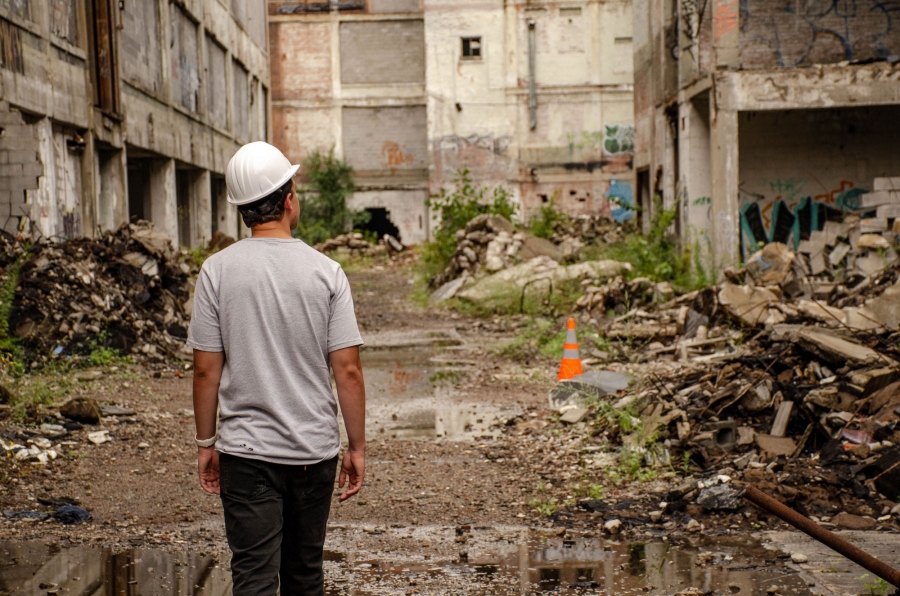 Jacob Jones from Pure Detroit gives tours through the debris and rubble of the former Packard Plant.

During World War II, like many factories, Packard shifted to wartime production making aircraft engines. But after the war, the company couldn’t quite get its groove back — in the mid-1950s, the last Packard rolled off the line in Detroit. The factory buildings were used for storage for a time, but by the 1970s. the plant sat largely rotting and abandoned, too expensive to tear down. And, there was always a hope that it would someday find new life.

“I want you to imagine looking in this place, you see these sort of gutted-out areas, you see cinderblock all over the place — imagine windows,” said Jones, walking between a few of the old buildings. “Anywhere you see cinder block, you would have had massive windows that would have let natural light pour through and natural air pour through." 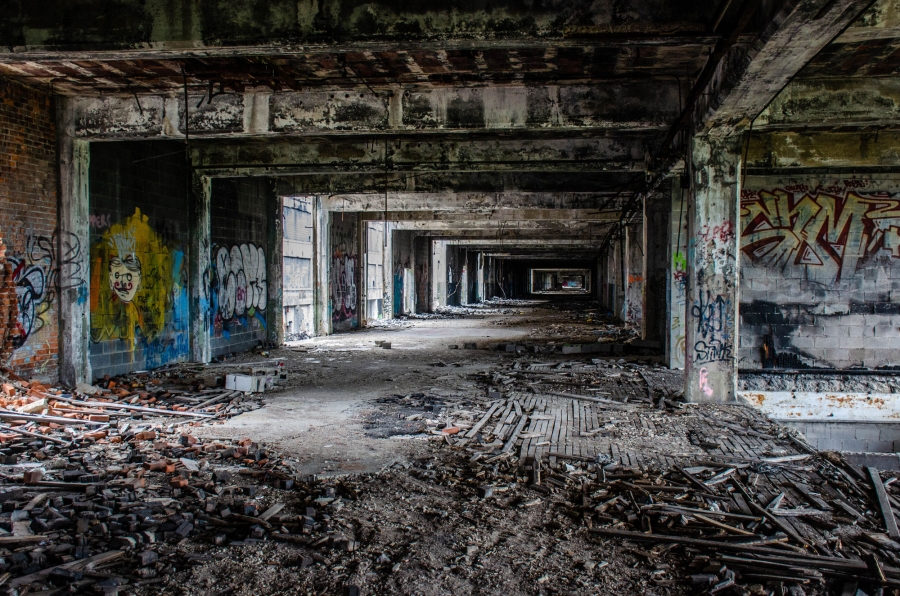 Inside the old Packard Plant. Between WWI and WWII, Packard was considered America’s premier maker of luxury cars. Roughly 40,000 people worked at the facility in Detroit at its peak.

Fernando Palazuelo, a Spanish developer living in Peru, apparently saw that vision. In 2013, he bought the Packard Plant at a foreclosure auction. The price tag: $405,000. Since then, progress has been slow — too slow for many — but there are some signs of movement.

Palazuelo has a track record of renovating historical buildings in Peru, Spain and Nepal. He has said that he’ll turn the Packard Plant into residential units, commercial spaces, restaurants and an art gallery.

Palazuelo’s company declined an interview for this story. But five years ago, he told The World that he had fallen in love with the city of Detroit, as well as its real estate prices.

That’s roughly 9,000 times cheaper than in Spain. But there’s a reason for the discount in Detroit.

“Do we need more office space? Not unless we get more tenants,” said Jim Bieri, a principal at Stokas Bieri Real Estate in downtown Detroit.

Bieri is rooting for Palazuelo to succeed, but says they’ve seen outside developers buy pieces of Detroit and “a lot of times you see people come in and it’s years before anything happens. It’s encouraging that [Palazuelo] came in, it’s encouraging that he spends time here, it’s discouraging that it’s taking so long.”

It took four years just to break ground and start cleaning up the Packard Plant. During that time, Detroit’s downtown core has made a steady comeback. A few years ago, Detroit was severely depressed, bankrupt, a national punching bag. Walk just outside Bieri’s downtown office today and you see an area buzzing with new restaurants, food carts and a streetcar. 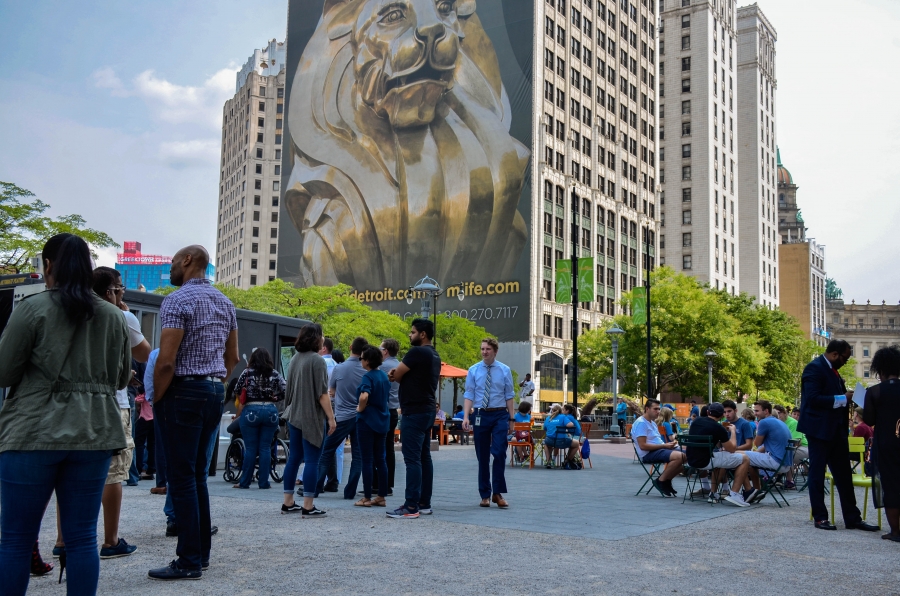 Downtown Detroit during a weekday at lunch time.

But the Packard Plant is more than four miles from the revitalized downtown core.

“The Packard Plant is surrounded by neighborhoods in which probably 40 to 50 percent of the homes have disappeared,” said Reynolds Farley, a demographer who teaches about the history of Detroit at the University of Michigan. “There’s no major bus line or other transportation system that goes right by the Packard Plant.”

Farley said restoring the Packard Plant would be a long shot: “The building needs a tremendous amount of work. It would be a very expensive proposition to bring it back to use.”

The facility has asbestos and polluted soils from decades of industrial use. When Palzuelo bought the buildings in 2013, the New York Times wrote, “There are risky bets in commercial real estate, and then there is the Packard.”

Palazuelo has said it could be a $500 million project. Farley doesn’t see the business case, but he’s glad somebody does. In Detroit, the Packard Plant isn’t just any old place.

“Symbolically, it would be tremendous for Detroit if some parts of that plant were restored,” said Farley. “It is such an iconic plant because of the history of the Packard automobile, because of the war efforts there in World War II. It would be amazingly satisfying to see some positive developments there.” 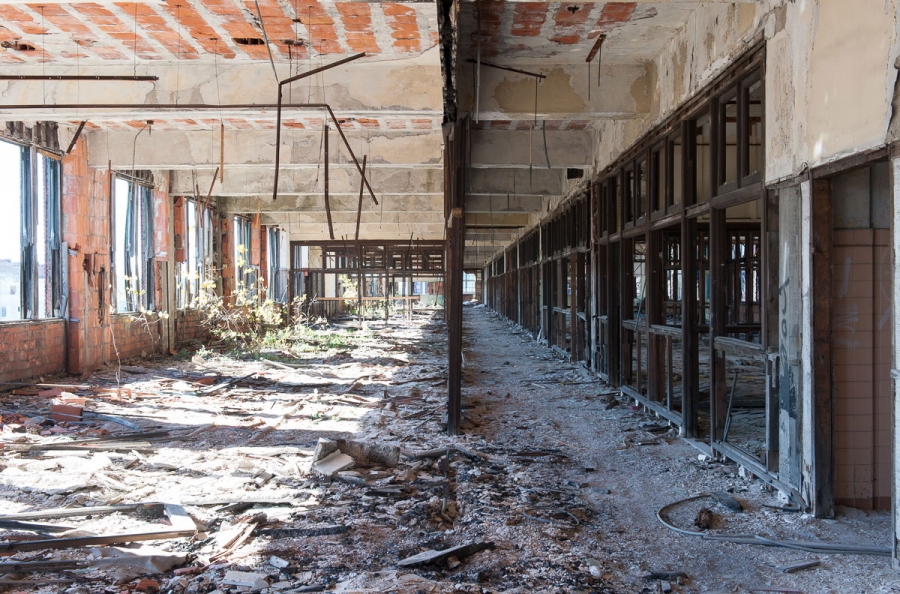 Before and after at the Packard Plant renovation. Photos taken in November 2016 and August 2018. 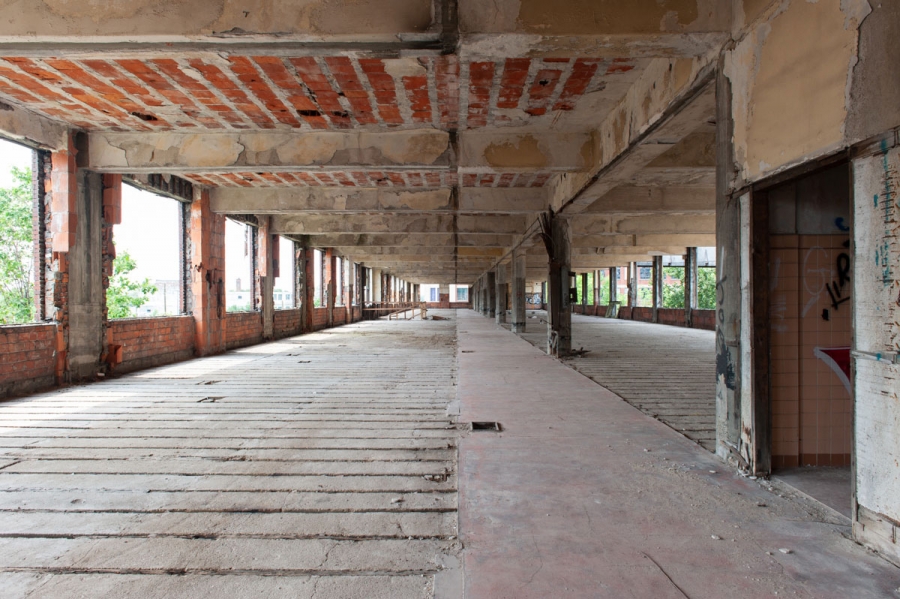 Before and after at the Packard Plant renovation. Photos taken in November 2016 and August 2018.

And while Packard still looks like a ruin, locals say it’s already come a long way.

“It’s a complete difference,” said Christopher Burns, who lives down the street and works at Packard supervising the cleanup, which right now largely consists of removing debris. “We had a lot of stone and brick lying around, a lot of that’s been removed.”

Burns said before Palazuelo stepped in, things were bad here.

To be clear, homeless people as well a dead body have been found in the Packard Plant.

Burns seems optimistic though about the future and about Palazuelo, his new boss in Peru.

“He’s a very nice guy, very personable, mannerable, he dresses very well,” said Burns. “He’s very in touch with what’s going on, he has a pulse on the city. He’s the only one — one of the only ones that I know, there may be some others — but he’s the only one that’s taking a very great risk in coming to the inner city and revitalizing and plans to bring jobs to this area.” 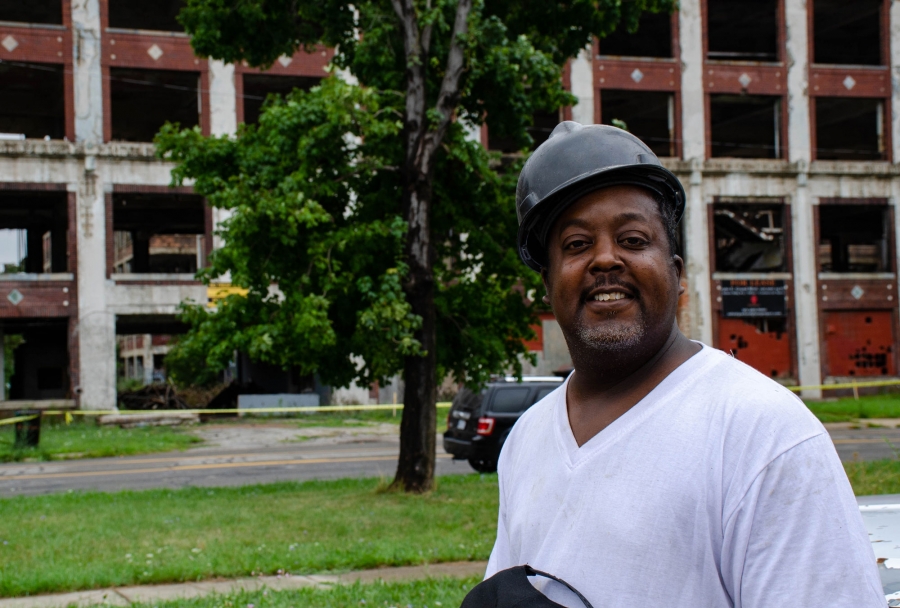 Neighborhood resident Christopher Burns, who is a supervisor for the Packard Plant cleanup, said even though it’s only been a year, “It’s a complete difference.”

And while many have doubts about his vision, Palazuelo has urged patience, saying the project could take up to 15 years. If he pulls it off, urban experts say it could be among the world’s most ambitious, difficult and improbable redevelopment projects in decades.