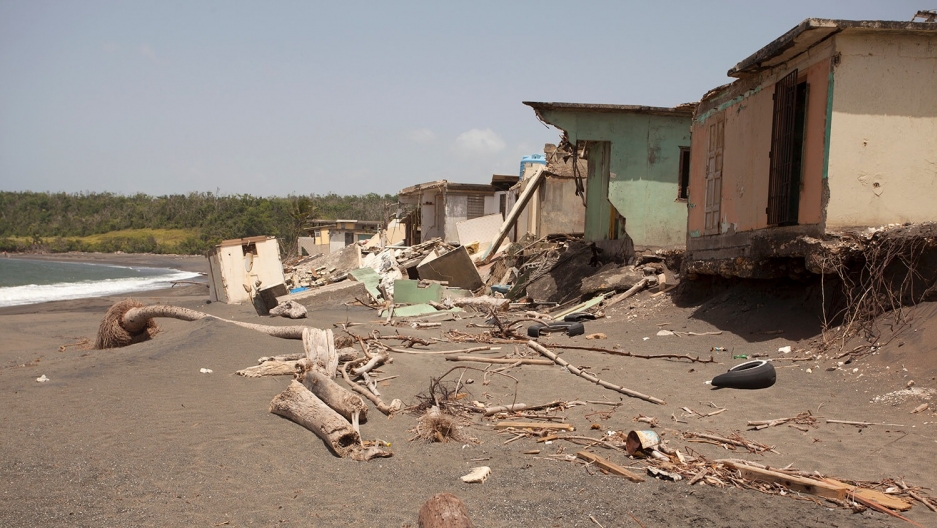 Debris and destroyed homes line the beach at La Boca, in north-central Puerto Rico. Hurricane Maria shrunk the beach from a wide, flat expanse of sand to a narrow one, making the waterfront homes vulnerable to storms. Then, another storm battered the homes and wore away their foundations.

Rosa Elena Mastache Dominguez, 54, comes from a family of fishermen. Some four generations back, her ancestors claimed a little piece of shoreline on the north-central coast of Puerto Rico. They built a house on the black-speckled sand, looking out onto palms and blue-green water.

The tight-knit community, now known as La Boca, has a deep a connection to the land here. Many families have been there for generations and feel that their way of life and history lie on that beach. So it was all the more shocking when Hurricane Maria struck last September.

The storm changed the landscape; Maria’s waves clawed away at the sand, reducing the width of the broad, flat beach by approximately 90 percent. But it wasn’t just that the familiar landscape disappeared — it left La Boca defenseless.

“The beach works as a buffer of all the energy from the swells and the storm waves,” said geologist Maritza Barreto.

Without it, the community became vulnerable to storms.

But Maria didn’t directly damage the beachfront homes. That came later, in February, when another weather system brought huge waves. Without the beach to protect them, Mastache and her neighbors watched nervously as the water washed in.

Related: In Puerto Rico's coffee country, 'We have to motivate the farmers to come to the soil again'

“We never thought the sea would reach us,” she said. “Never.” 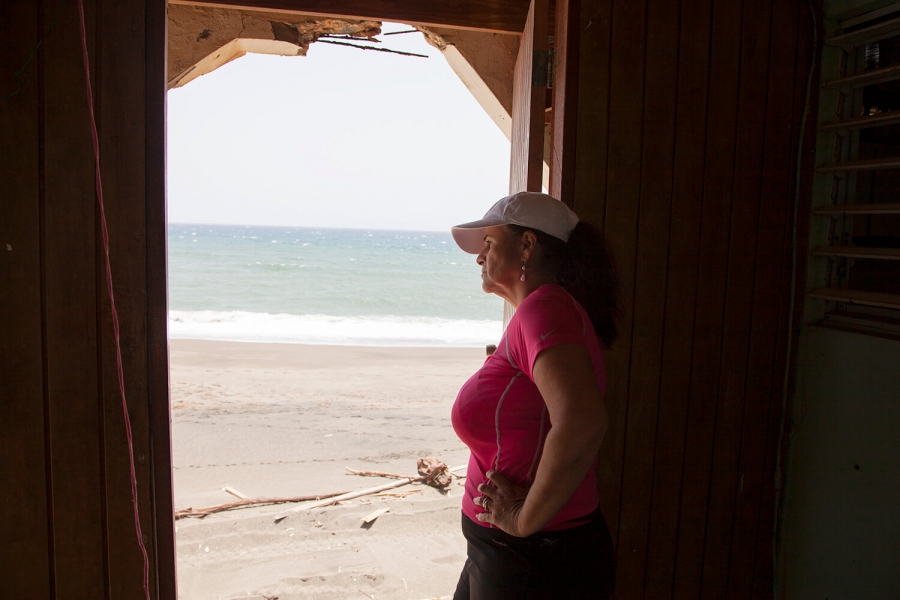 Rosa Elena Mastache Dominguez looks out of a door in her family home. The door once led to bedrooms and bathroom but the entire back of the house collapsed when a storm washed in.

At Mastache’s home about four months later, clothes hung on a line and the driveway was neatly swept. Her parents had built up the modest home into a cement structure with several bedrooms and bathrooms. When she unlocked the door, the smell of Clorox mixed with ocean rushed out. The home was empty.

“The sea split the house in half,” she said, pointing to a crack running up one wall and down the next.

Where the entire back of the house used to be, there was nothing. The waves scooped sand from underneath it until whole rooms collapsed. The family moved out and closed the gaping hole with a metal sheet.

Their neighbors helped buy a pile of rocks to reinforce the foundation. Mastache peeked through a broken wall at a worker riding a small machine as he maneuvered between jagged slabs of cement. Just beyond, a neighbor’s bathroom, walls and all, lay in the sand.

Six houses and a handful of businesses were damaged in La Boca, but the problem repeats all over the island.

Even before Maria, more than half of Puerto Rico’s beaches were eroding, partly because building on the coast can disrupt natural cycles of sand movement.

That’s a problem when nearly everyone lives along the coasts.

“Most of the economic activity of Puerto Rico occurs also in the coastal areas, mostly in the San Juan metropolitan area,” said Ernesto Díaz, Director of the Puerto Rico Coastal Zone Management Program. All the electric power stations are located on the coast, along with sanitary infrastructure, power lines and fiber optic cables.

Related: California emerges as a leader at climate summit

He says erosion is a natural process. Sea levels also vary naturally over time. But human actions have sped those things up.

Today, Puerto Rican law prohibits construction on beaches. Some developers still manage to do it but many of the structures on the coast were built before the laws passed. That includes places like the Mastache family’s house in La Boca. It’s been there for about 100 years.

As these beachside properties succumb to the weather, or just time, people are not supposed to rebuild them. 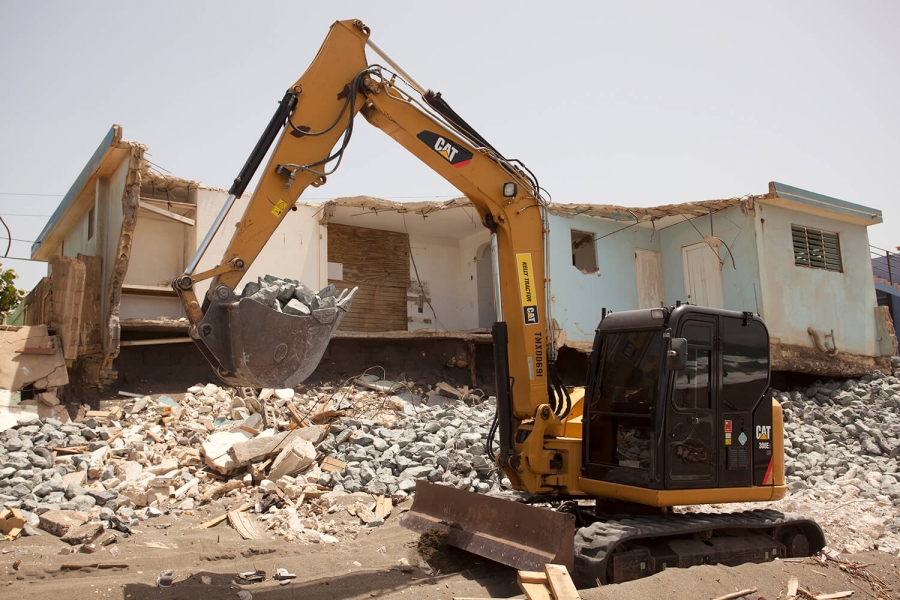 The low income community of La Boca bought rocks to shore up what remained of their homes and to reinforce washed away foundations. People there said without help from the government, they had no choice but to rebuild their homes, even though rebuilding on the beach is in many cases illegal in Puerto Rico.

When Díaz heard that the community is rebuilding, he sat up straight. “If people are dumping rocks to protect properties as we speak they are doing so illegally,” he said.

Mastache knows all this. But she says the government hasn’t told them to stop rebuilding. Enforcement is notoriously lax.

She adds that no one is helping them to relocate, either.

The weather system that ultimately damaged homes in La Boca wasn’t a federally declared disaster, so people here don’t qualify for the emergency money that other families received after Maria. Mastache says without aid, many in her low-income community don’t have the option of moving.

“If the government comes and says, ‘you have to leave, here’s this much money for you to get out,’ that’s one thing,” she said. “But if they don’t tell you anything, you have to fix what you have.”

She also acknowledges there’s a good chance that the house, even if it’s rebuilt, will be wrecked again by the sea.

And yet, she says the affected families all want to return.

Before leaving the house, Mastache pointed to a handwritten Bible passage she tacked up on the mint green wall outside. It’s from Job 1:21 and read: “Naked I came from my mother’s womb, and naked I will depart. The Lord gave and the Lord has taken away.”

As she locked up the front door, another door that once led to a bedroom flew open. Through it, she looked out at the ocean waves breaking in the near distance.