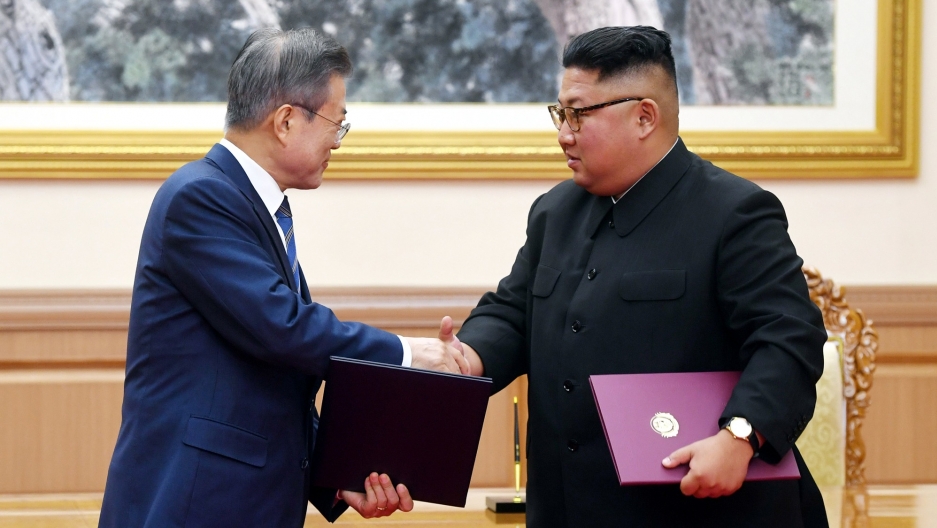 Speaking at a joint news conference with South Korean President Moon Jae-in in Pyongyang, North Korean leader Kim Jong-un said his country would permanently abolish its key missile facilities in the presence of foreign experts and that the North was also willing to close its main nuclear complex if the United States took unspecified "reciprocal action."

The two leaders also agreed to turn the Korean peninsula into a "land of peace without nuclear weapons and nuclear threats."

The pledges Kim and Moon made at their third summit this year could inject fresh momentum into the stalled nuclear negotiations between Washington and Pyongyang and lay the groundwork for another meeting Kim recently proposed to US President Donald Trump.

"I don't think President Moon got everything he was seeking from these interactions, but Kim Jong-un gave Moon some tangible things for which he can take credit," said Michael Madden, an analyst at the Stimson Center's 38 North think tank in Washington.

"These are good-faith gestures which will likely facilitate further and more substantive negotiations," Madden said, adding a second summit between Kim and Trump was "highly probable."

Kim pledged to work toward the "complete denuclearization of the Korean peninsula" during his two meetings with Moon earlier this year and at his historic June summit with Trump in Singapore.

But discussions over how to implement the vague commitments have since faltered. Washington is demanding concrete action toward denuclearization, such as a full disclosure of North Korea's nuclear and missile facilities, before agreeing to key goals of Pyongyang — declaring an official end to the 1950-53 Korean War and easing tough international sanctions.

"Kim Jong Un has agreed to allow nuclear inspections, subject to final negotiations, and to permanently dismantle a test site and launch pad in the presence of international experts. In the meantime there will be no rocket or nuclear testing," Trump wrote on Twitter.

Kim said he would visit Seoul in the near future, in what would be the first-ever visit to the South's capital by a North Korean leader. Moon said the visit was expected to take place by the end of the year.

The leaders of the two Koreas also announced a series of steps to deepen bilateral exchanges in the economy, culture and sport.

Kim's latest promises come days before Moon meets Trump in New York on the sidelines of the UN General Assembly next week. Seoul officials hope Moon will be able to convince Trump to restart nuclear talks with Pyongyang, after he canceled a trip by his secretary of state to Pyongyang last month, citing lack of progress.

Though North Korea has unilaterally stopped nuclear and missile tests, it did not allow international inspections of the dismantling its only known nuclear test site in May, drawing criticism that its action was for show and could be easily reversed.

As a next step, North Korea will allow experts from "concerned countries" to watch the closure of its missile engine testing site and launch pad in the northwestern town of Dongchang-ri, according to a joint statement signed by Moon and Kim. The facilities were a key test center for its intercontinental ballistic missiles designed to reach the United States.

The North also "expressed its readiness" to take additional measures, such as a permanent dismantlement of its main nuclear  facilities in Yongbyon should there be unspecified corresponding action from the United States.

The neighbors remain still technically at war because the Korean War ended in armistice and not a peace treaty.

North Korea has consistently refused to give up its nuclear arsenal unilaterally, and stressed that the United States should first agree to a formal declaration ending the war.

Satellite images and other evidence in recent months have suggested North Korea is continuing to work on its nuclear program clandestinely.

Seo Yu-suk, a research manager at the Institute of North Korean Studies in Seoul, said the facilities at Dongchang-ri and Yongbyon are "almost obsolete" and the North has mobile missile launchers that are easier to use and harder to detect, while there are likely covert sites elsewhere.

The two Koreas agreed to begin construction to reconnect railways and roads linking the countries within this year. They will also work to restart a joint factory park in the North border city of Kaesong and tours to the North's Mount Kumgang resort, when conditions are met.

But some experts worry those projects could constitute a violation of UN Security Council sanctions aimed at drying up resources for Pyongyang's weapons programs, and upset Washington.

The two Koreas also agreed to pursue a bid to co-host the 2032 Summer Olympic Games, and actively work together in other international competitions including the 2020 Olympic Games in Tokyo.

Later on Wednesday, Moon is scheduled to watch the North's signature "Brilliant Fatherland" Mass Game, with a formation of glowing drones, lasers and stadium-sized gymnastics shows designed to glorify the country.

On Thursday, the last day of his three-day visit, Moon plans to visit Mount Baektu in North Korea with Kim before returning home.

North Korea says Kim's grandfather and father were born at Mount Baektu, a centerpiece of the North’s idolization and propaganda campaign to highlight the ruling family's sacred bloodline.