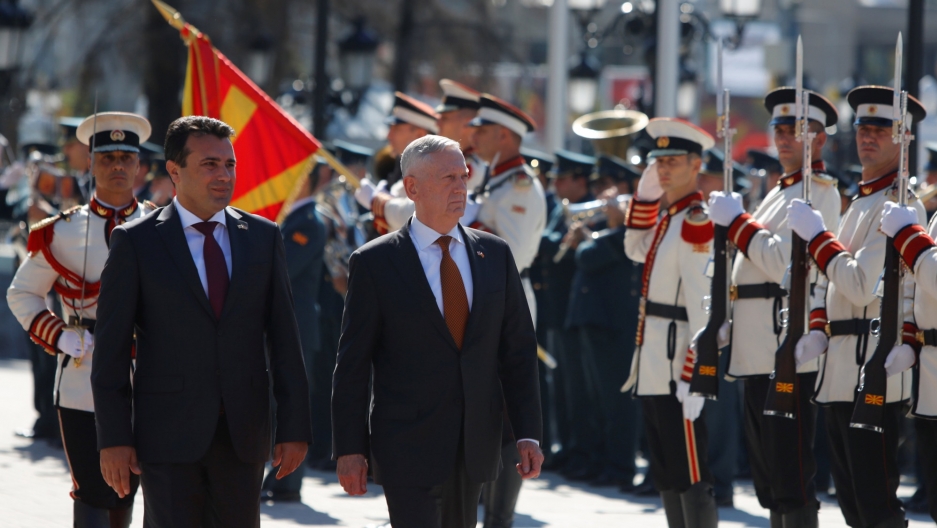 Speaking after talks in Skopje with Macedonia's leaders, US Defense Secretary Jim Mattis accused Russia on Monday of attempting to influence the outcome of a referendum in Macedonia.

The referendum involves Macedonia changing its name, opening the way for it to join NATO and the European Union.

Macedonians will vote on Sept. 30 on a deal reached in June with neighboring Greece that would change the country's name to the Republic of Northern Macedonia. Athens insisted on the change in return for lifting its opposition to Skopje joining NATO and the EU.

"We do not want to see Russia doing there (in Macedonia) what they have tried to do in so many other countries," Mattis  told reporters traveling with him to Skopje, apparently referring to Washington's concerns about Russian meddling in the 2016 US presidential election and other polls.

"No doubt that they have transferred money and they are also conducting broader influence campaigns," Mattis said, adding it was unclear how effective Moscow's efforts had been.

Russia denies the charges of meddling but strongly opposes Macedonia's plan to join NATO. Its ambassador in Skopje has said the country could become "a legitimate target" if relations between Russia and NATO deteriorate further.

In July, Greece expelled two Russian diplomats and barred two other people from entering the country for trying to bribe officials and foment demonstrations to thwart the deal with Macedonia.

Mattis is the latest in a string of Western leaders, including German Chancellor Angela Merkel, to visit Macedonia and urge its citizens to back the name deal.

"... [W]e plan to expand our cybersecurity cooperation to thwart malicious cyber activity that threatens both our democracies," Mattis said, with Macedonia's prime minister and defense minister standing next to him.

NATO has invited Macedonia to begin accession talks with the alliance, but says it must first change its constitution and adopt the new name. The EU has also said it would set a date for Macedonian accession talks pending implementation of the deal.

Recent opinion polls suggest a majority of Macedonians will support the name deal, though nationalists oppose it. Several thousand Macedonians rallied on Sunday in Skopje in support of the deal and of NATO and EU membership.

"There is no alternative for the Republic of Macedonia then integration into NATO and EU," Prime Minister Zoran Zaev said on Monday, standing beside Mattis.

Washington is concerned that Russia is sowing disinformation with the aim of suppressing voter turnout in the referendum and creating an impression that the United States is not committed to the region.

"Our approach to disinformation is not to try to counter every single argument ... We show by our senior-level visits, our presence, we show by highlighting our cooperative activities," Laura Cooper, deputy assistant secretary of defense for Russia, Ukraine and Eurasia, told reporters before the Mattis trip.

The United States spends nearly $5 million a year in security assistance for Macedonia and since 1991 has provided about $750 million in total assistance. Macedonia has a few dozen troops in Afghanistan as part of the NATO-led mission.

US officials believe Russia accelerated its disinformation campaign in southeast Europe in 2014, the same year it annexed Crimea from Ukraine.

"What is in some ways frustrating and maddening about it is, it is so cheap, what they are doing, and it is so effective," said Heather Conley, director of the Europe program at the CSIS think tank in Washington.

"This requires sustained American and European engagement, it (southeast Europe) is a pretty fragile place."