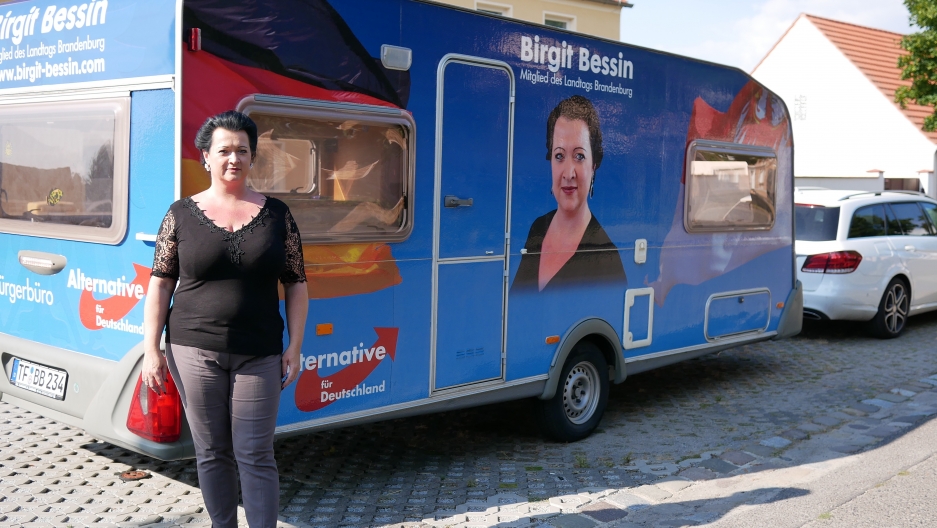 Brandenburg state representative Birgit Bessin poses with a trailer bearing the logo of her party, the AfD, in the village of Kolzenburg. Support for the AfD is growing in eastern Germany.

The traffic in the tiny German neighborhood of Kolzenburg was mostly cyclists and sparrows when Alternative for Deutschland (AfD) state representative Birgit Bessin drove into town with a blue trailer hitched to her white Mercedes earlier this month.

Bessin isn't facing elections this year, but she says she is criss-crossing her district to get a feel for what voters are thinking.

“We want to speak to persons from the tiny, small, sweet villages who perhaps don’t come to our events in other states,” she says.

Her district, Teltow-Flaeming, is home to 165,00 people including about 2,500 refugees and asylum-seekers. The area has been recognized by the American NGO Cultural Vistas for its success in integrating newcomers. Yet, some people here are uneasy with their new neighbors. They say migrants bring crime and have harassed women on the street.

It’s a battle cry for the AfD. In a recent rally in the district, Bessin railed against migrant crime against women.

“In the past, feminism was a matter for the left,” she says. “Today we, the Alternative for Deutschland, are protecting the rights, freedom and security of women and children.”

Refugees and asylum-seekers were 15 percent of violent crime suspects in Germany last year, though they made up only 2 percent of the total German population, says criminologist Rita Haverkamp.

But Haverkamp, who works at Tüebingen University, questions whether that number is skewed.

"People are more prone to go to the police when a refugee is involved," Haverkamp says.

Refugees and asylum-seekers also tend to be young and male — a demographic that is the most prone to crime across all ethnicities, she says.

"The feeling of not feeling safe is overwhelming the facts," Haverkamp says.

A man in jeans and an orange button-down shirt approaches Bessin’s trailer. She offers him coffee and cake at a little booth inside. As he comes out, he says his name is Thomas.

He doesn’t want to give his last name because he works with the local government but he says he came to talk to Bessin about a number of issues — his biggest concern is the refugee crisis.

Thomas says he used to talk with the newcomers in town. He recalls meeting a Pakistani man in the gym.

“It was OK, we chitchatted and it was nice,” he says.

But a lot of the migrants are young men, he says, and they hit on girls — including one of his daughters. They have also been involved in violent crime, he claims. He says in 2016 one migrant fatally stabbed another; the suspect successfully claimed self-defense. The next year, he says he heard of a brawl in a neighboring town where six foreigners attacked a German and broke his leg.

Thomas thinks the AfD is the only party that’s paying attention to this. He used to vote for the Christian Democratic Union of Germany (CDU), the party of Angela Merkel, but he says they moved too far to the left.

“The CDU changed and the AfD is filling in,” he says.

The AfD’s popularity is up in Brandenburg even as the party is under pressure after a few of its leaders appeared at a protest in Chemnitz, about 120 miles away. The protest was sparked by the murder of a German man, allegedly by two migrant men. The protest turned violent, and some of the demonstrators were filmed making the Hitler salute, which is illegal in Germany. Thomas says those people should be punished.

“How stupid do you have to be to make a Hitler salute in front of TV cameras?” he wonders.

But then he offers, without any evidence, that maybe those people were left-wing plants.

“It might be a covert operation so you can brand the whole demonstration as extreme-right and shut down the conversation [about crime],” he says. 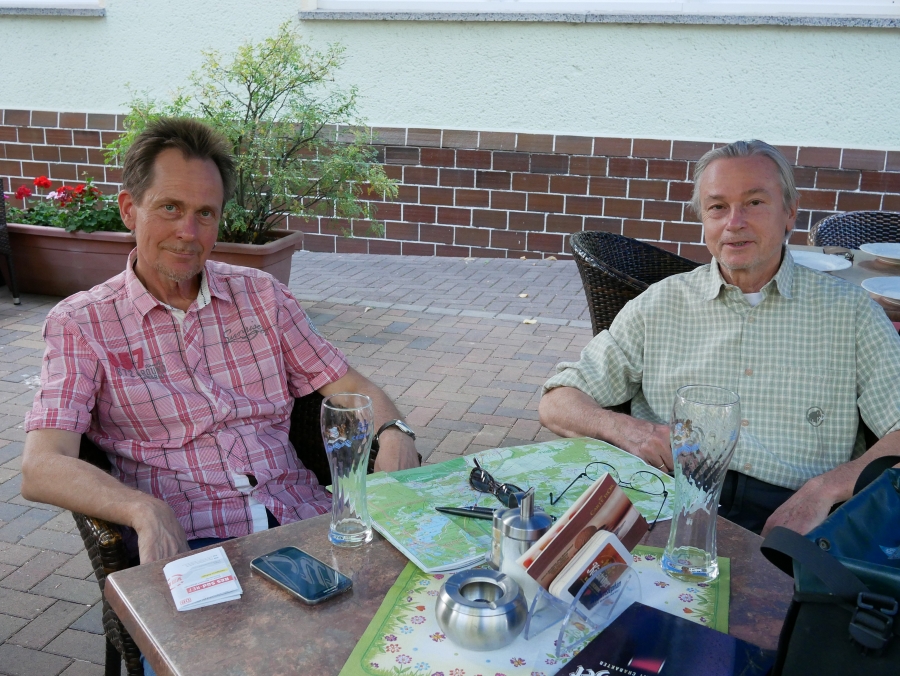 Berlin bicyclists Mattias Voigt, left, and York Goetze say the AfD trailer near this pub reminds them of what they believe is the party's close ties with "real, violent Nazis." Voigt says he gets anxious when he imagines the party rising to power.

At the local pub a few steps away from Bessin’s trailer, York Goetze and Mattias Voigt from Berlin study a road map of the region on a table as they break from a bicycle trip for a beer.

“The AfD is connected with the national right,” Goetze says.

“With real, violent Nazis,” Voigt continues. “This gives me angst because I think about German history. If they come to power it will be no laughing matter.”

But the people here who are attracted to the AfD do not see the party as a threat. They see Bessin’s friendly face on a bright blue trailer — and an open door.

Frank Hessenland contributed to this story.