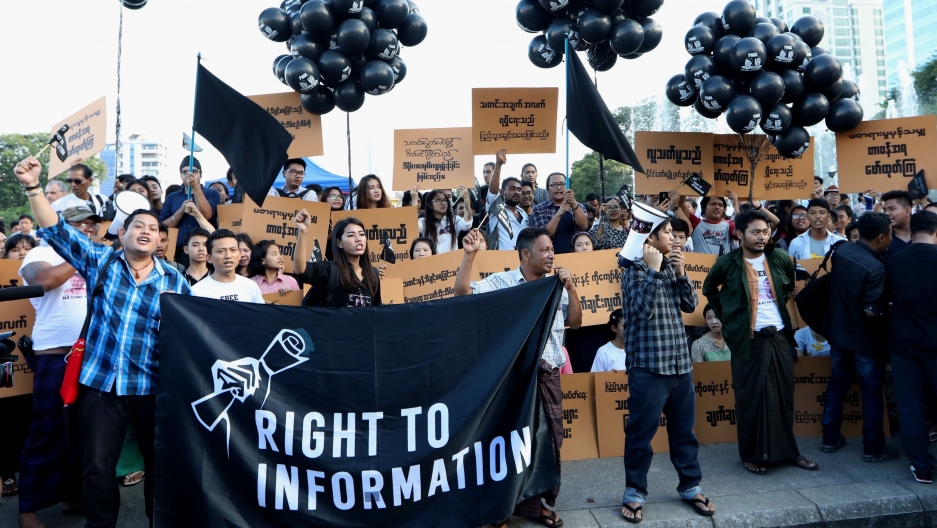 At least 100 Myanmar youth activists and journalists called for the release of two jailed Reuters journalists on Sunday, warning that the seven-year prison terms handed to the pair this month threaten the public's right to information.

Demonstrators including high-school students gathered peacefully in the heart of Myanmar's largest city, Yangon, held signs and chanted slogans denouncing the guilty verdict against the two journalists. A small contingent of police looked on as the protesters released black balloons printed with the words "Free Wa Lone and Kyaw Soe Oo."

Reporters Wa Lone, 32, and Kyaw Soe Oo, 28, were convicted on Sept. 3 under the colonial-era Official Secrets Act in a case that was seen as a test of democratic freedoms in Myanmar.

Thar Lun Zaung Htet, a journalist involved in organizing the protest, said the verdict against reporters who were "just doing their job" would stifle reporting in Myanmar.

The verdict drew calls from senior United Nations officials, political figures including US Vice President Mike Pence and human rights advocates around the world for their immediate release.

Government spokesman Zaw Htay could not be reached for comment on Sunday.

The country's leader Aung San Suu Kyi said at a forum in Hanoi last week the case had nothing to do with freedom of expression. The reporters had been sentenced for handling official secrets and "were not jailed because they were journalists," the Nobel laureate said.

On Friday, six Myanmar journalist organizations published a rare statement from groups within the country criticizing the country's leader, saying they were "disappointed" with her comments.

The reporters, who plead not guilty, said they were handed rolled papers by police shortly before they were detained last December, and a police witness testified in court that they had been set up.

The reporters had been investigating the killing of 10 Rohingya Muslim men and boys by security forces and local Buddhists amid a military response to insurgent attacks last August.

Some 700,000 Rohingya crossed from Myanmar into Bangladesh fleeing the crackdown, which UN-mandated investigators said last month was launched by senior Myanmar generals with "genocidal intent."

Signs held by the protesters on Sunday included the messages "Murder is not a state secret" and "revealing the truth is not a crime."

One organizer, Maung Saung Kha, performed a short play where he put on a military jacket over the orange traditional Burmese jacket worn by lawmakers of Suu Kyi's National League for Democracy. He then rolled up a copy of the state-run daily, The Mirror, and began hitting members of the press with it.

Activist Htet Khine Soe said the "injustice" of the case against the reporters had led him to design a T-shirt with an illustration of Wa Lone and Kyaw Soe Oo's faces. The design was worn by some demonstrators and was also used on stickers placed around Yangon.

"We need to know what's happening in the world. We need journalists for that," he said. "Without that, we will be stupid people without ears and eyes."