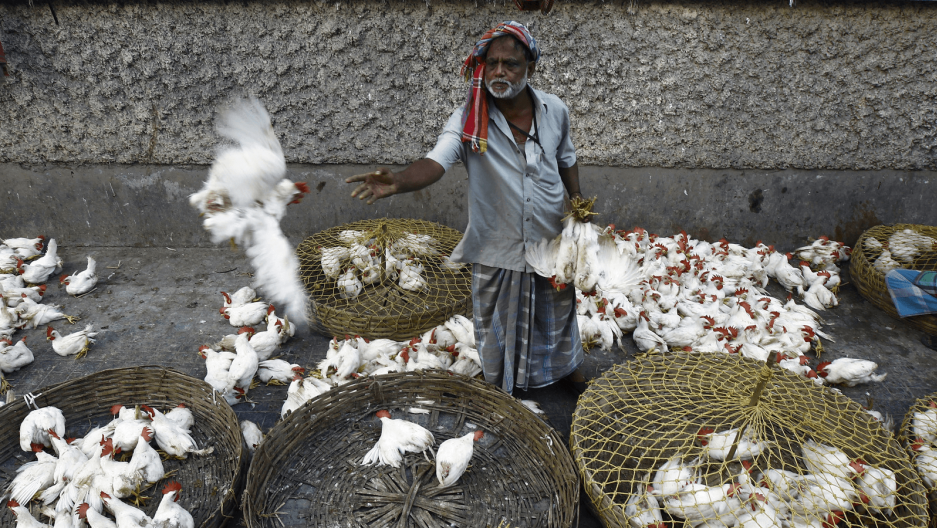 A vendor sorts chickens according to size at a roadside wholesale chicken market in Kolkata, Oct. 8, 2014.

India has a reputation as a vegetarian nation, and Indians certainly consume far less meat than the global average. But the view of India as a predominantly vegetarian nation may not be quite accurate.

India, whose population is predicted to overtake China’s, is rapidly changing from an agricultural society to an industrial economy with a surging urban population. This is driving the fastest-growing poultry market in the world, as cultural norms change and eating meat becomes a status symbol.

Vegetarianism in India has been gradually becoming less strict over the past 30 years. Only about three in ten Indians now claim to be vegetarian, and a 2016 national survey found that more than half of people aged between 15 and 34 eat meat.

A recent National Family Health Survey found that only 30% of women and 22% of men describe themselves as vegetarian. Other studies have similarly found that a relatively small minority practice vegetarianism.

Even these numbers may well be underestimates. Indians are said to underreport their meat consumption due to religious and cultural stigmas associated with it.

Poultry is India’s most popular type of meat, and India is projected to be one of the world’s largest growth markets for poultry consumption.

The rise in meat consumption is predominantly driven by urban India, and the highest percentages of non-vegetarians come from southern states such as Telgana, Andhra Pradesh, Tamil Nadu and Kerala.

Another reason may be that chicken can be considered a universally acceptable meat, given the religious taboos associated with beef among Hindus and pork among Muslims. Although 80% of Indians are Hindus, India is home to several other major religions and sub-faiths, each with its own strictures about food and eating. Vegetarianism is less common among Muslims, Sikhs, Christians, Bahais, Parsis and Jews who collectively make up 15% of India’s population.

In addition to religious and cultural variations, several key factors have influenced India’s shift, overall, towards meat consumption. These include rising urbanization, increasing disposable incomes, globalization and cross-cultural influences. Many urban Indians are embracing consumerism as a sign of upward social mobility and meat is widely considered to be a status symbol.

Related: This Indian composer's first hit was a song about Boroline. Now she's an internet sensation.

Despite this, others still consider meat-eating to be socially and culturally unacceptable. A 2015 study found young people felt “you eat [meat] in secret, away from your family”.

It seems urban Indians today face a dissonance. On one hand, increasing exposure to new lifestyles is creating cultural change, but there is still pressure to adhere to traditions that have prevailed for centuries.

This contradiction is reflected in some of the urban Indian attitudes from the 2015 study on meat consumption. On one hand, some felt:

…in our Bhagvad Gita, Ramayan (in reference to the Hindu holy books) there are old teachings that non-veg is impure. It is the food of demons/monsters.

On the other hand, it was also claimed:

[When it comes to] holy men and Brahmins, it’s not like they don’t like eggs or meat. In front of people they will behave, but on the quiet/sly, they will smoke and drink and eat everything else.

Meat eating in India is a complex issue, with many facets. However, recent trends and figures certainly seem to indicate one thing: it is a mistake to label India as a vegetarian nation.

Tani Khara is a PhD student in sustainability at the University of Technology Sydney.