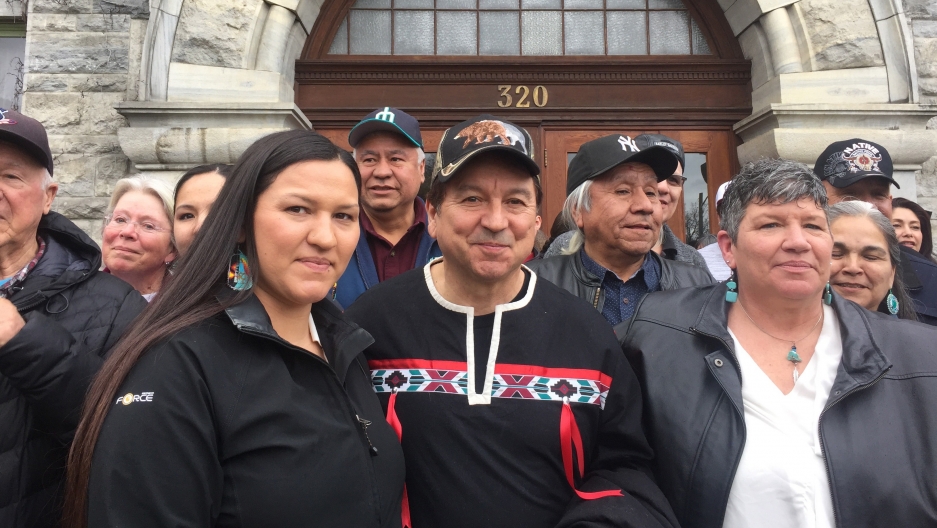 Rick Desautel, flanked by his daughter and his wife, Linda (right), celebrates his acquittal of illegal hunting charges outside the provincial courthouse in Nelson, British Columbia, in March 2017.

About a decade ago, Rick Desautel, an American descendant of the Sinixt tribe of Canada, decided to challenge a declaration by the Canadian government — that the Sinixt in Canada were officially extinct.

The declaration had come after the last Sinixt member in British Columbia passed away in 1956. As a result, Sinixt descendants like Desautel who regularly crossed the US border into Canada lost their rights to traditional land claims in that country.

“One of the big things that I wanted to get was the invisibility of me erased,” Desautel says, “so I can come back here and have some input on things that are happening in this country to save a lot of this history that’s still here.”

Desautel lives on the reservation of the Confederated Tribes of the Colville in northeast Washington state. In 2009, he crossed the border into Canada to shoot an elk to be used for Sinixt ceremonies such as weddings and funerals. His wife, Linda, helped him quarter and haul the elk out. She said her husband figured they could just strap it on her back.

“I’m just thinking to myself ‘Holy criminy, what the hell you doing to me, trying to kill me?’ But, we got it out,” she says.

But Desautel wasn’t a resident of Canada and he didn’t have a hunting license, so the hunting trip was illegal. For him, it was also a protest.

“I knew for a fact that if somebody didn’t start this, it never going to get going,” Desautel says. “So, when I was asked if I wanted to start this, I said, ‘Sure, I’ll come up here and kick up a little dust and see what happens here.’”

On March 27, 2017, a court in British Columbia acquitted Desautel of charges related to illegal hunting. According to the judge, Desautel was exercising an aboriginal right that stretches back thousands of years.

“I knew for a fact that my ancestral grounds were here,” Desautel said after the ruling.

Sinixt descendants who were gathered outside the courthouse cheered, cried and threw their arms around each other. The celebration was a long time in coming.

The Sinixt, like many Indigenous tribes, have faced centuries of conflict. White settlers started arriving within Sinixt traditional homeland in the early 1800s. Eventually, the Sinixt were pushed across the US-Canada border and onto the Colville Reservation. More than 4,000 Sinixt descendants live there today — among them Shelly Boyd, who comes from a long line of Canadian Sinixt. She testified at Desautel’s trial.

“There’s been some moments in this past year when we sat in the courtroom and heard the judge for the first time say that we were not extinct, that that was ridiculous. I never thought I’d hear that in my lifetime,” Boyd says.

But the case isn’t over. The provincial government lost an appeal in late December. Now, the case is before British Columbia’s Court of Appeals. The latest hearing was on Sept. 12. The province argues the ruling could raise questions about the security of Canada’s border.

The provincial government has declined multiple requests for comment because the case is still in the appeals process. Questions about reparations for the Sinixt tribe remain unanswered for now. But some observers say this small case about hunting an elk could set a big precedent for tribal sovereignty issues in Canada in the future.