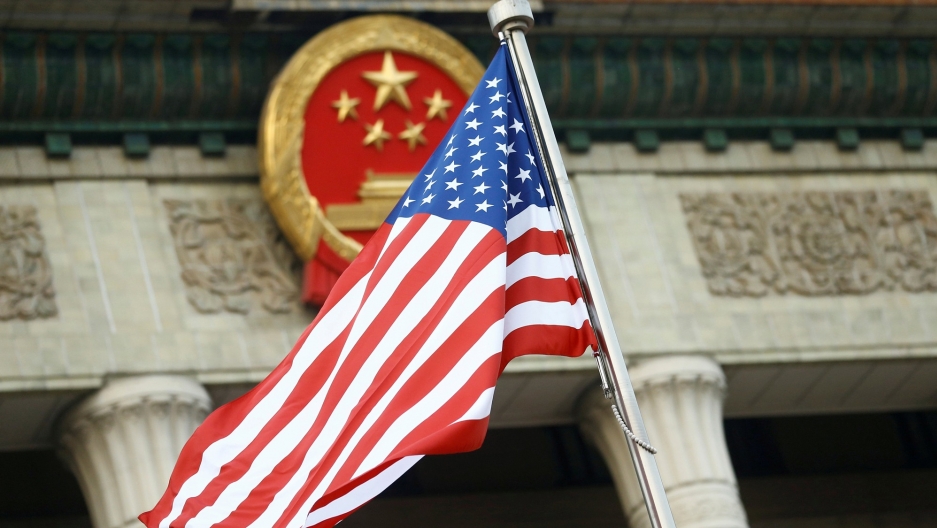 A US flag is seen during a welcoming ceremony in Beijing, China.

The United States and China have imposed tariffs on $50 billion of each other's goods since July. Now, according to a survey of hundreds of firms, American companies in China are being hurt by the tariffs in the growing trade war, prompting the US business lobbies behind the poll to urge the Trump administration to reconsider its approach.

President Donald Trump has criticized China's record trade surplus with the United States, and has demanded that Beijing cut it immediately, threatening further tariffs on an additional $200 billion worth of goods — and possibly more.

The negative impact of the tariffs on US companies has been "clear and far reaching," according to the joint survey by AmCham China and AmCham Shanghai published on Thursday.

More than 60 percent of US companies polled said the US tariffs were already affecting their business operations, while a similar percentage said tariffs by China on US goods were having an effect on business.

Companies reported the tariffs were pressuring profits, reducing demand for their products and driving up production costs.

Roughly three-in-four firms surveyed said duties on an additional $200 billion worth of Chinese goods would hurt business further, and close to 70 percent said additional retaliatory Chinese tariffs would be bad for business.

"This survey affirms our concerns: Tariffs are already negatively impacting US companies and the imposition of a proposed $200 billion tranche will bring a lot more pain," said Eric Zheng, chairman of AmCham Shanghai.

"If almost a half of American companies anticipate a strong negative impact from the next round of US tariffs, then the US administration will be hurting the companies it should be helping," he said.

"We support President Trump's efforts to reset US-China trade relations, address long-standing inequities and level the playing field. But we can do so through means other than blanket tariffs."

More than 430 companies responded to the survey between Aug. 29 and Sept. 5, which Ken Jarrett, president of AmCham Shanghai, said had been conducted in part to provide AmCham with data for meetings with members of congress later this month.

China may not be able to match future US tariffs dollar for dollar and has warned that it would take other measures.

More than 52 percent of respondents to the survey reported already suffering the consequences of such measures, mainly through increased inspections, slower customs clearance and "other complications from increased bureaucratic oversight or regulatory scrutiny."

Nearly two-thirds of the companies that responded have not relocated nor were they considering moving manufacturing facilities away from China. But of those that were, the top destinations were Southeast Asia and the Indian subcontinent.

Only 6 percent said they were considering relocation back to the United States, the survey said.

Meanwhile, nearly a third of companies said they were considering delaying or cancelling investments, underscoring the heightened uncertainty created by the trade tensions.

On Wednesday, more than 60 US industry groups launched a coalition — Americans for Free Trade — to take the fight against the tariffs public.