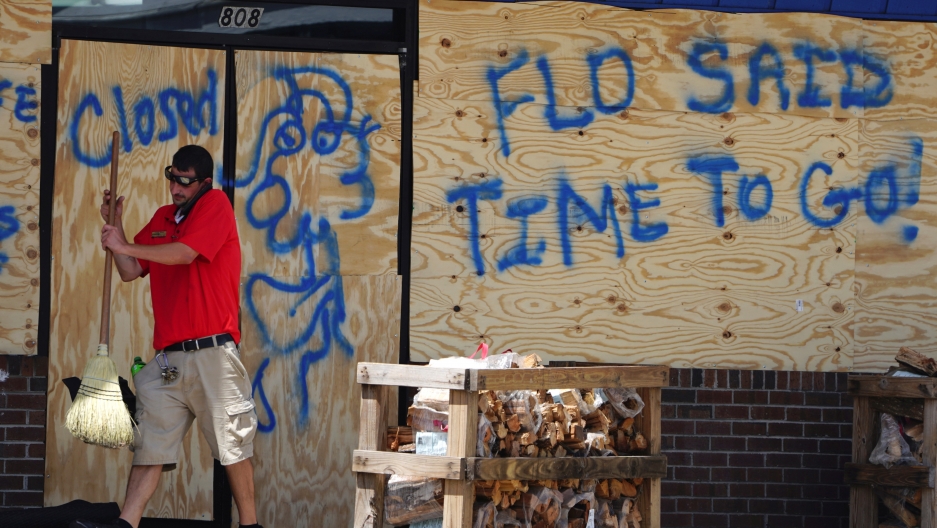 A man sweeps the entrance of a boarded-up store before Hurricane Florence comes ashore in Carolina Beach, North Carolina, Wednesday, Sept. 12. The Carolinas and Virginia are bracing for heavy rains and flooding.

There's been a lot of criticism on social media about money being diverted a few weeks ago from the Federal Emergency Management Agency to Immigration and Customs Enforcement.

The amount? About $10 million.

The World fact-checked this and located the congressional document to prove it.

Both agencies belong to the Department of Homeland Security. DHS spokesman, Tyler Q. Houlton, tweeted that none of the money came from FEMA's operations budget.

Under no circumstances was any disaster relief funding transferred from @fema to immigration enforcement efforts. This is a sorry attempt to push a false agenda at a time when the administration is focused on assisting millions on the East Coast facing a catastrophic disaster.

The money taken from FEMA was part of a total $201 million transfer from different parts of DHS to ICE, to pay for the detention and removal of undocumented immigrants.

The transfer, or "re-programming" as it's called in federal jargon, was first noticed by two nonprofit groups, including one called the Detention Watch Network.

THE WORLD: Mary, FEMA and the Department of Homeland Security have both insisted this $10 million comes from nonoperational areas of FEMA's budget, specifically training, travel, public engagement and IT.

(See impact statement on page 35). Is that what you found?

Mary Small: I think that that is really missing the point and frankly, just parsing words. Precisely what their reprogramming and transfer request shows is that money is moved around inside of these accounts. So to say that this money was initially slated for something that isn't a lifesaving intervention doesn't mean that it couldn't have been used for that. And I think the bigger picture here that it's really important to keep our eye on is the kind of single-minded focus that that DHS has had on moving money from other accounts into immigration detention, in pursuit of this really ramped-up enforcement, frankly, detention- and deportation-machine that they are operating.

It's interesting you say that because it turns out the money has been transferred not just from FEMA. But the DHS report to Congress shows a total of $200 million being diverted to ICE so far this year from across the Department of Homeland Security. What other kinds of programs are being affected?

The transfer and reprogramming request shows that money has been pulled from the Coast Guard, from TSA aviation security, from other parts of ICE, actually, as well as from FEMA. So, really, I think many of the components inside of that department have been affected by this.

So this $200 million going to ICE. Do we know how they're spending it? I mean, do we know where this money is going?

We have some idea of where it's going. Partly, it's certainly going to an expansion of the immigration detention system that ICE oversees. Just in the last few months, ICE has opened up multiple, very large, new immigration detention facilities, some of them with private prison companies. So part of this money is definitely going to expand the overall system of incarceration for immigrants.

FEMA and ICE both belong to the Department of Homeland Security. So they're allowed to do this. They're allowed to transfer money between agencies but they're supposed to report such changes to Congress. Does Congress have to approve such transfers?

You're right that this is currently allowable. One of the things that we're actually working on right now with members of Congress is to get them to change that. But this pattern has been repeated three years in a row, actually, where ICE has overspent the amount of money that they were given by Congress for detention and removal, deliberately overspent that money and then gotten an infusion of funds from taking money from other parts, other accounts, into the detention account.

Congress has two years in a row told them to stop it, told them to cut it out and the Government Accountability Office also recently issued a report calling into question the kind of fiscal management that they're using to do this. So this isn't a one-off. This is now an established pattern of behavior by ICE that is really concerning. And so this is the moment for Congress to intervene to actually restrict that authority that ICE has. Our understanding is that the request goes to the top Republican and top Democrat on the subcommittee that oversees funding for DHS in both the House and the Senate. And the last two of these requests that have come in, the Democrats have not signed off on, but the Republicans have, and since they control Congress, those requests have moved ahead.

And you said this has been going on for about three years, so it was occurring in the Obama administration as well?

The first of these occurred at the end of the Obama administration. That's right. And I think it's really important to note that while the request that you're talking about is $200 million, this scheme of overspending and transferring funds into the account and then using that new, elevated level as the baseline for the next round, the sort of double-ratchet per fiscal year, has allowed them to move a billion extra dollars into the account over the course of the last three years. So this is amounting to a very, very significant amount of money.