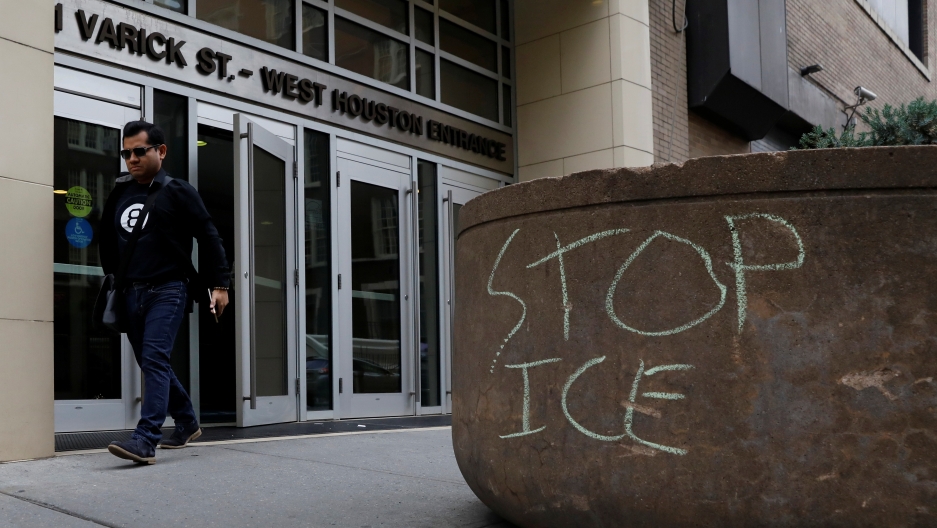 A message is seen outside a building that houses the Immigration and Customs Enforcement (ICE) offices in New York City on June 23, 2018.

On a muggy August morning, Angel Luis Bonilla and some friends were kibbitzing in a waiting room at 201 Varick Street in downtown Manhattan. The federal office building is where immigrants in detention in or around New York are normally taken for court hearings.

Bonilla and his buddies had come to support their friend Enrique, a 35-year-old undocumented immigrant from Mexico who was arrested in June.

"I’ve known him about five to six years. He's a hard-working man," said Bonilla, a retired worker for the city’s transit system.

Enrique requested not to reveal his last name because his immigration case is still open and he is vulnerable to deportation. In June, he was picked up by Immigration and Customs Enforcement (ICE) officers. They came to his Brooklyn apartment to detain one of his roommates and arrested Enrique as well after questioning him about his status. Enrique was taken to a detention center in Hudson County, New Jersey. His friends had come to the Manhattan courtroom for his bond hearing.

But Enrique didn't appear in person. Instead, he appeared on a video screen from Hudson, seven miles away, wearing his orange uniform.

"I was waving," said Bonilla, who wore a straw fedora and sat with six other supporters. "I don’t think this is fair — fair to the person that is going through this immigration process."

The judge granted bond to Enrique, but immigration lawyers still worry that the remote aspect of video could have a negative impact on their clients' cases.

Hearings for immigrants in detention were always held in person at Varick Street. But in late June, after an especially large protest outside the building against the Trump Administration's immigration policies, ICE stopped transferring the detainees and switched to video teleconferencing. ICE spokesperson Khaalid Walls said certain groups were spreading misinformation and advocating violence against ICE employees.

"This decision was made in order to ensure the safety of ICE employees, the court, the public and the detainees," he said.

Although video teleconferencing isn't allowed in full criminal court hearings because the Constitution guarantees the right to confront one's accuser, it's been widely used in immigration courts since Congress allowed the technology in 1996. It's especially common at detention centers in remote areas. But it was a surprising change in New York City, where the detainees are housed a short ride away, in either northern New Jersey or Orange County, New York.

"There’s no protest here today," said Enrique's lawyer, Ignacio Durán, after his client's bond hearing at the Varick Street facility in August. "There is no real security reason for why they can’t bring the person here."

The American Bar Association and local immigration lawyers have complained to ICE about the switch to video.

"It’s been very hard on detained people and on our ability to represent them," said Andrea Sáenz, the supervising attorney of the immigration practice at Brooklyn Defenders Services. Her nonprofit is part of the New York Immigrant Family Unity Project, which provides free lawyers to all detained immigrants who are low-income.

ICE's spokesman said video will continue for the foreseeable future.

The Executive Office for Immigration Review (EOIR), which runs the immigration courts, described video teleconferencing on its website in 2009 as a way to save travel time for judges, allowing them to hear more cases. Ashley Tabaddor, president of the National Association of Immigration Judges, said her union believes the Trump administration is relying more heavily on video now to expedite cases at the border.

"It's all about trying to push numbers," she said, adding that the Department of Justice also wants judges to meet quotas for case completions. "As my colleague calls it, assembly-line justice."

She said she's concerned about the impact on immigrants but said the union hasn't concluded whether video teleconferencing affects the outcomes of hearings. After a 2017 report by the General Accounting Office, EOIR created a website to solicit feedback and comments about the technology from users.

The most comprehensive study on video in immigration courts was published in 2015 by Ingrid Eagly, a law professor at UCLA. She reviewed thousands of cases involving detained immigrants and found those that had all of their hearings by video were more likely to be deported.

But she said that doesn’t mean the impersonal nature of video somehow biased the judges. Immigrants who applied for asylum were just as likely to get it, she said, whether their cases were heard in person or by video.

"Judges that I spoke with about video conferencing told me advising litigants of their rights can be awkward and less effective over a screen than face-to-face," she said.

On a recent day at the Varick Street court, a sketch artist created paintings of immigrants who appeared for their hearings by video. Christopher James, a volunteer with the New Sanctuary Coalition, was also in the court. He’s been going there for more than a year to show support for detained immigrants and their families. He said it's harder for an immigrant to appear sympathetic on a plasma screen. 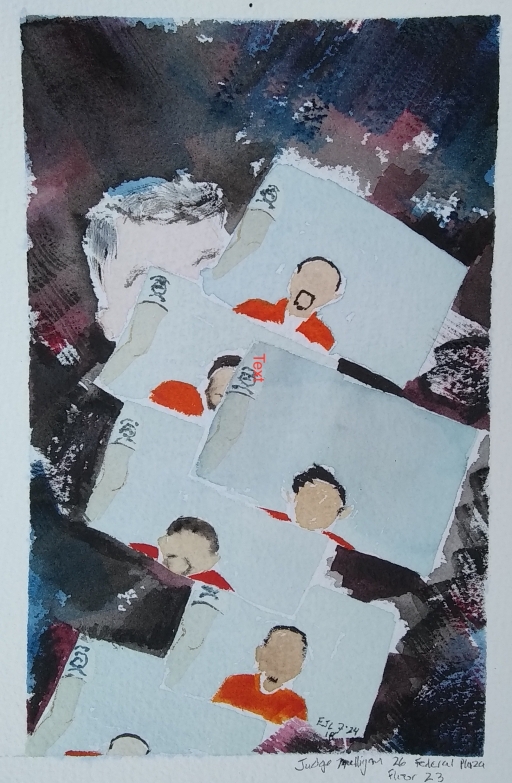 A volunteer with the New Sanctuary Coalition, Elizabeth Sturges Llerena, drew this sketch after watching detained immigrants appear before a judge by video feed.

On the same day as Enrique's bond hearing, James was among volunteers who sat with the family members of a 61-year-old woman who was detained in Bergen County, New Jersey. Her daughter cried in the courtroom as she watched her mother's face on the video screen. The procedural hearing ended within minutes and family members left disappointed.

"She looks very tired and sick," said the woman's husband.

Enrique said it was strange observing his own hearing on a video screen while he was across the river at the Hudson detention center. He reflected on the situation a few weeks after his release at his attorney's law firm, Ross & Asmar, where he was going over his case.

"I see my lawyer, the government lawyer and the translator," he recalled, of his hearing by video.

He also saw his friends enter the courtroom but couldn't see them once they were seated. Nor could he see the judge's face, just his hands. His lawyer said this was a problem with the camera's position that day. Enrique said he wanted to look the judge in the eye to see "if he did really believe me, I’m a good person. You need to see somebody face-to-face."

Whether Enrique stays in the US will be decided by a different judge in a Manhattan court for immigrants who are not detained. There, he'll have his hearing in person.