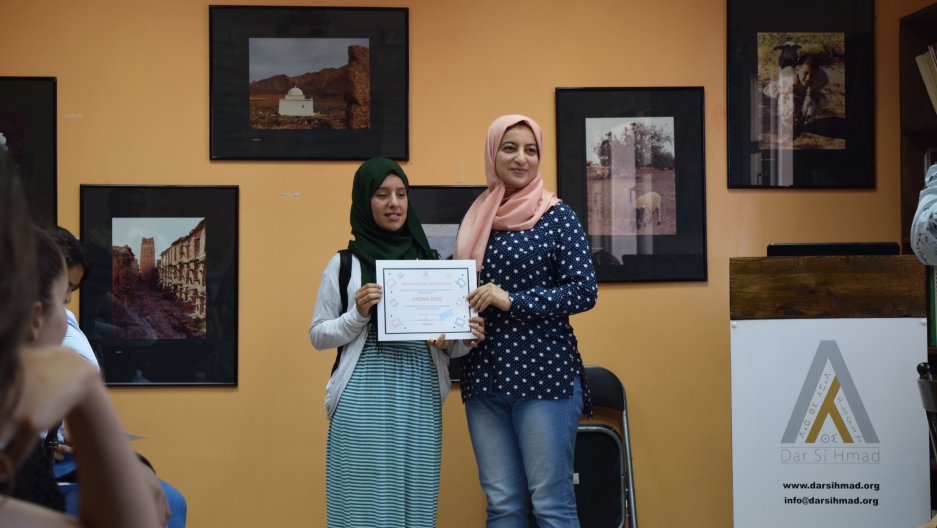 Khadija Changa (right) of Dar Si Hmad presents a graduation certificate to Hasna Zaiou on the final day of the 10-day tech camp.

Most summer days, 14-year-old Manal Taragroum says she would be stuck at home, helping with chores around the house.

But not today. That’s because the energetic teenager is one of 20 young girls who has been selected to participate in a tech camp where they are learning the fundamentals of social media, digital photography and even basic coding.

“This is an opportunity for them to discover something totally different from their world,” says Jamila Bargach, the head of Dar Si Hmad, the local nongovernmental organization that’s organized the 10-day tech camp.

Running a program like this is a big deal for the girls, who come from the poor outskirts of Agadir, a sleepy Moroccan city facing the Atlantic Ocean.

Opportunities like this are rare for girls in Morocco, especially those from low-income backgrounds.

“In a way, we’re doing this summer camp because these girls are in that world which I also lived in for a long time,” says Bargach.

In Morocco, 40 percent of women are illiterate and often lack the skills needed to escape poverty.

Women also make up less than 30 percent of the country’s labor force, and those who are employed mostly work unskilled jobs.

Bargach is no stranger to this reality.

The 54-year-old anthropologist has spent the last two decades working to improve the lives of women across the country.

She says on the one hand, Morocco has offered a number of legal protections for women in recent years. 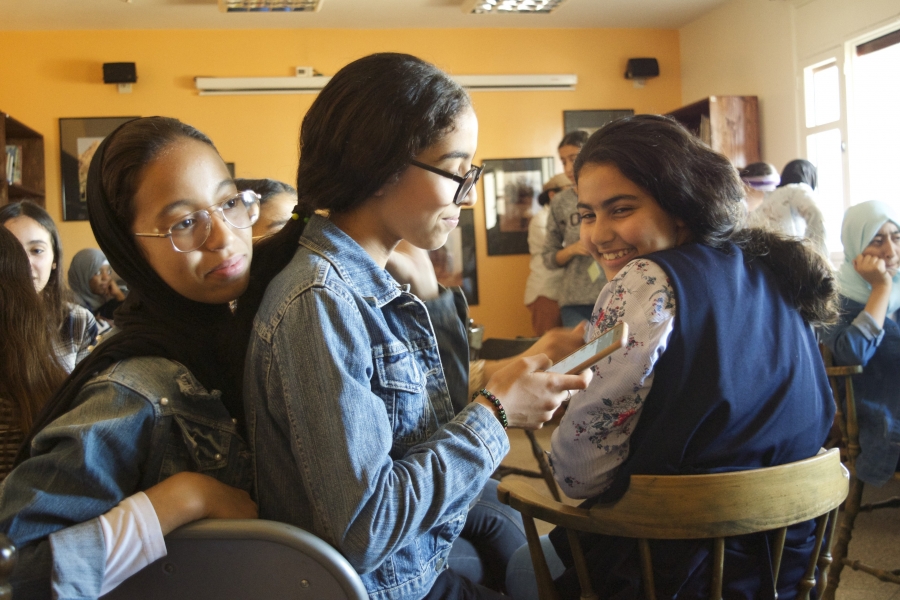 Twenty girls from around the coastal Moroccan city of Agadir participated in this year's tech camp, where they learned more about the fundamentals of social media, digital photography and basic coding.

A rewrite of the 2011 constitution, for example, guaranteed gender equality.

“This is the kind of country in which we live in with all these parallel realities,” says Bargach. “Realities of women still largely being downtrodden.”

A different kind of upbringing

Bargach herself grew up in a well-educated family in Morocco’s capital, Rabat.

But she didn’t have a typical childhood.

When her mother became pregnant, Bargach’s aunt was still grieving over the death of her 2-year-old daughter.

So Bargach’s mom, who already had three daughters, made a deal. If she gave birth to another girl, that baby would go to her sister.

“And I was born a girl,” says Bargach. “So, I was given to my biological aunt but I grew up calling her my mom.”

This different kind of upbringing made Bargach want to pursue a career in social anthropology, studying nontraditional families. 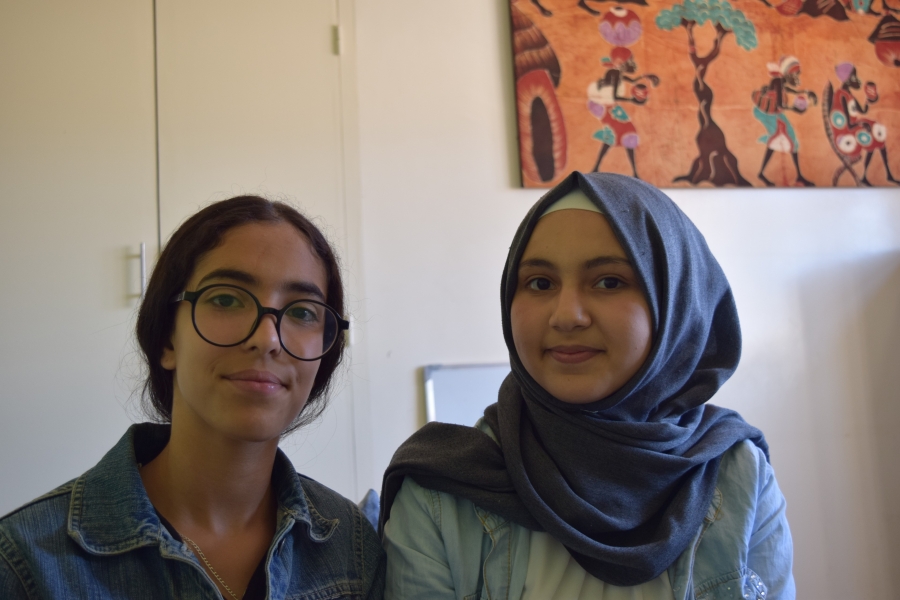 Manal Taragroum (left) and Aya el-Farsaoui (right) are shown on the last day of the girl's tech camp run by the NGO, Dar Si Hmad. Both girls say they have big plans for the future — Taragroum plans to become a marine biologist and el-Farsaoui says she hopes to open an NGO of her own one day.

She quickly learned that despite being from a well-off background, going after her dream wouldn’t be feasible in Morocco because of her gender.

“I was very frustrated with the possibilities that my family and my world gave me,” she says. “It was this constant barrage of questions. ... Why is it that this person could do this and I couldn’t? It was very difficult.”

Work that was ‘considered a crime’

Bargach eventually got her PhD in the US, where she lived for more than 10 years. Then, in 2000, she returned to Morocco to work as a professor.

While teaching, she also ran a women’s shelter.

At the time, women who had children out of wedlock or who ran away from their husbands could be thrown in jail.

Protecting them, as Bargach did, was considered a crime. 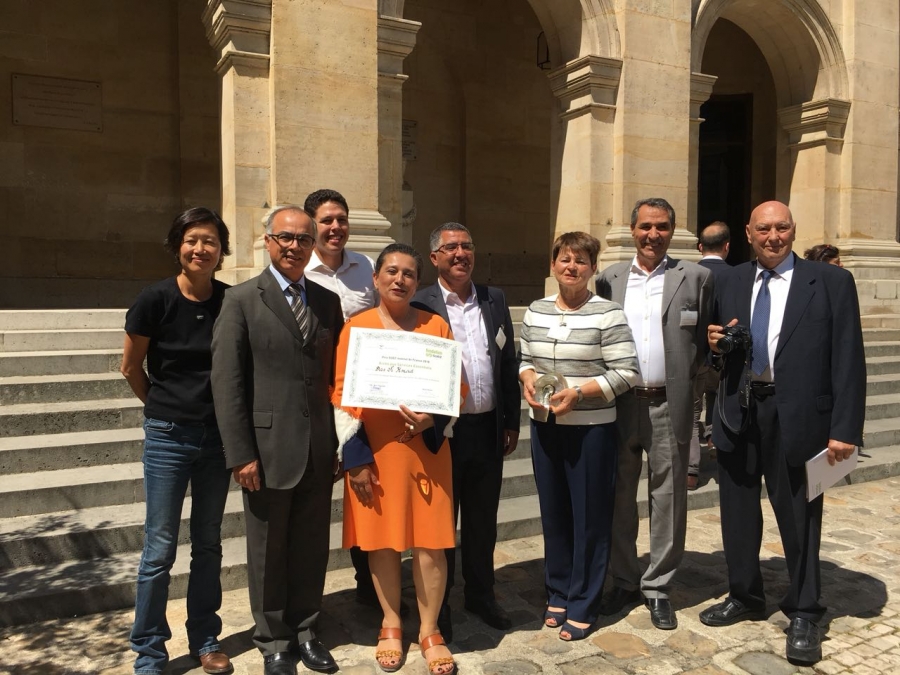 “So, for me, it was a civil disobedience to say, 'I will not accept that part of the law,'” says Bargach.

The laws turned out to be only one of several hurdles.

Bargach quickly realized many women at the shelter couldn’t escape from the shame they felt for leaving their households.

According to one survey, more than 60 percent of Moroccan women even said they felt husbands could be justified in beating their wives.

So, after running the shelter for five years, Bargach stepped down.

“Not because I didn’t want to do it,” she says. “Just because I felt helpless and because the changes were extremely limited and the successes very few.”

After leaving the shelter and her job in academia, Bargach decided to move south.

She settled with her family in Agadir, a part of the country where she felt she could combine her interests in the environment, women’s rights and helping rural communities.

Today, she makes sure all those boxes are checked by running the organization, Dar Si Hmad.

Take the NGO’s innovative fog water project. For three years now, Bargach and her team have been providing potable water derived from fog to villagers living in the Ait Baamrane tribal region of southwest Morocco.

The project has made a special difference for women, who used to spend several hours a day fetching water from local wells. 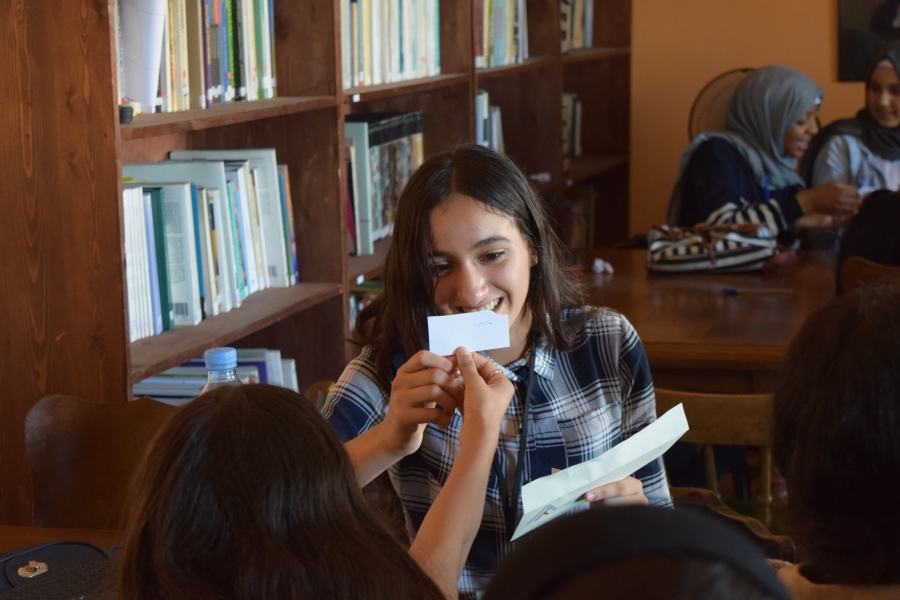 Students exchange words of encouragement on the final day of the tech camp.

Bringing men into the conversation

On the final day of the tech camp, the girls write notes of encouragement to one another and reluctantly say their goodbyes.

The hope is that after they leave the tech camp, they’ll see their career dreams can turn into realities.

But Bargach also says empowering Moroccan women is only half the battle.

“We need to also work with men,” she says. “You can do all the efforts you want with women. But the reality is, as long as you’re only giving women the tools and you’re not reaching the men, then [equality] is not going to happen.”

Changing attitudes of women and men across the country is a battle Bargach says she will continue to fight.