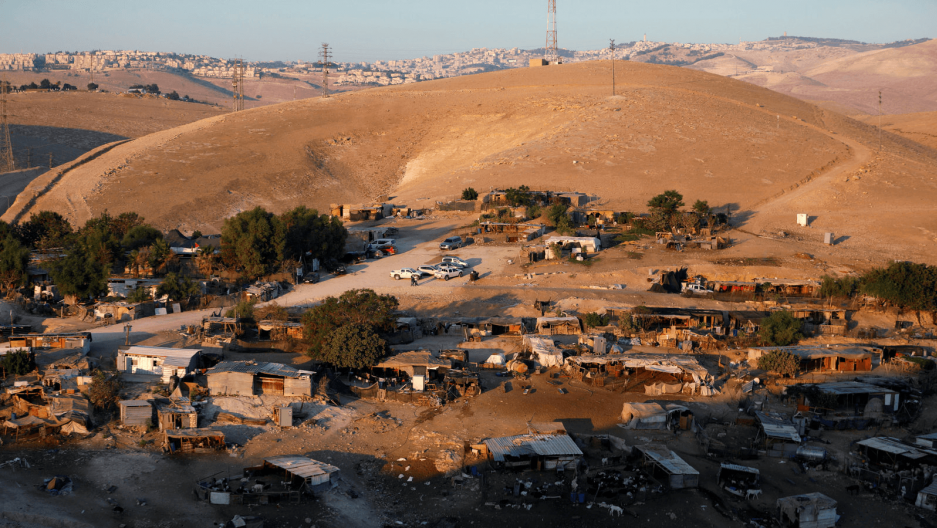 A general view shows the main part of the Palestinian Bedouin encampment of Khan al-Ahmar village that Israel plans to demolish, in the occupied West Bank, Sept. 11, 2018.

When the residents of Khan al-Ahmar awoke on Tuesday morning, they were greeted by the sight of five brand new shacks on the outskirts of their village, a cluster of tumbledown huts on a desert hillside in the occupied West Bank.

The structures are the work of dozens of Palestinian activists who have come to protest against Israel's plan to demolish Khan al-Ahmar and relocate its 180 residents — Bedouins who scrape a living by raising sheep and goats a site seven miles away.

Organized by activists from several rights groups and the Western-backed Palestinian Authority, the protest action comes a day before a temporary injunction that had put the demolition on hold is due to expire.

"We are just waiting to see if they are going to come tonight and expel us and demolish the houses," said Feisal Abu Dahok, 45, a resident of the village.

"We will not leave voluntarily. If they throw us out we will return to stay in this place. There is no other place for us to go."

Germany, France, Italy, Spain and Britain have followed the European Union and the United Nations in urging Israel not to demolish Khan al-Ahmar, citing the serious impact on the community and prospects for peace.

But last week Israel's Supreme Court rejected petitions to prevent the move, siding with the authorities which say the village was built without the required permits. Palestinians say such documents are impossible to obtain.

The Palestinian leadership has submitted an appeal to the International Criminal Court to intervene, senior Palestinian official Saeb Erekat said on Tuesday.

Khan al-Ahmar lies beside an Israeli highway that runs through the West Bank from Jerusalem to the Dead Sea.

Palestinians say the demolition is part of an Israeli push to create an arc of settlements that would effectively cut off East Jerusalem from the West Bank, territories Israel captured in the 1967 Middle East war and which the Palestinians seek for an independent state.

Israel has not said whether it plans to build a settlement on the site after demolition. Most countries consider settlements in the West Bank as illegal and an obstacle to peace. They say they reduce and fragment the territory Palestinians seek for a viable state.

Israel disputes this and cites biblical, historical and political connections to the land, as well as security needs.

Home to members of the Bedouin Jahalin tribe, which the military expelled from southern Israel in the 1950s, Khan al-Ahmar sits between a major Israeli settlement, Maale Adumim, and a smaller one to the northeast, Kfar Adumim.

Visible on the hills on the other side of a barren, rock-strewn valley, Kfar Adumim's whitewashed apartment blocks and tree-lined roads lie in stark contrast to the ramshackle wood and tin huts of the Bedouins.

Israel plans to relocate the community to an area near the Palestinian village of Abu Dis. The new site is adjacent to a landfill and rights advocates say that a forcible transfer of the residents would violate international law applying to occupied territory.

Israeli authorities could not be reached for comment on Tuesday — the second day of the Jewish new year holiday.

Helped by some of the villagers and working quickly under the cover of darkness, the activists assembled the shacks in time for sunrise. Some were flying the Palestinian flag.

"It is our right as Palestinians to live in these lands," said one protester, Mohammed al-Khatib.