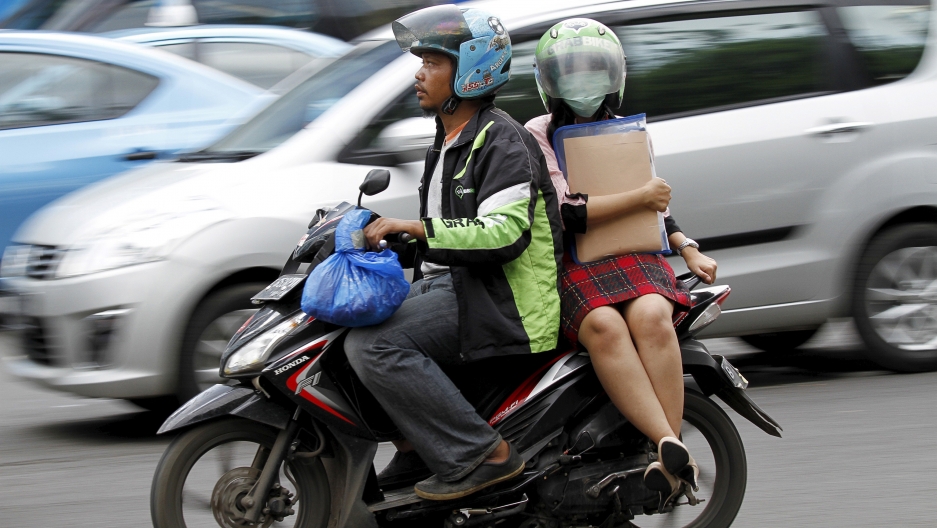 A woman rides on the back of a motorbike, part of the GrabBike ride-hailing service, on a busy street in central Jakarta, Indonesia Dec. 18, 2015. Indonesia's president publicly rebuked one of his cabinet ministers on Friday for a clampdown on ride-hailing services such as Uber and Go-Jek, which triggered outrage on social media in a country where public transport options are limited.

It was 8:45 a.m. when the Prambanan Express train from Surakarta arrived at Lempuyangan Station, Yogyakarta. My wife and I stepped out from the station and walked hurriedly to a spot under an overpass, 100 meters east of the station, where we could usually order an online taxi.

But after placing the order and being assigned a driver, I received a call from the driver asking us to walk north to a pickup spot across the railroad tracks. I was vexed that this was further away from the station. The spot where we were waiting was already some distance from the station. Now we must walk further.

But just as we stepped on the rails, the warning bell rang, a sign that a train was about to come through. We panicked and, as we turned back, a hard object hit me on the head. It was the wooden crossing barrier, which I hadn’t noticed, and it also struck my wife on her shoulder.

Related: Help is scarce for Rohingya children with intellectual disabilities

This is just one of the many disadvantages of trying to use ride-hailing apps at Lempuyangan Station. Those of us with visual impairments already face difficulties when we have to cross the tracks at night; imagine how much more difficult it is for those who have physical disabilities.

Instead of being a cheaper and safer transport option, getting an online taxi can actually be dangerous for people with disabilities in locations like Lempuyangan, where a so-called “red zone” is in force.

Ride-hailing apps such as Uber, Gojek and Grab have disrupted the market for traditional taxi services in Indonesia. In an attempt to secure their market, conventional taxis enforce “red zones” — areas where online taxi drivers are barred from picking up passengers.

Related: For Filipinos with disabilities, climate change and natural disasters are a dangerous mix

These red zones have no legal basis. They are defined simply by an understanding between conventional and online taxi drivers.

Related: 'Give her a voice': Activists say women with disabilities in India need independence

There are many such zones in Yogyakarta, such as at the Lempuyangan and Tugu train stations, Adisutjipto Airport, Giwangan and Jombor bus terminals, the Janti overpass, Gamping Market, the Dongkelan intersection and Sardjito Hospital.

Online taxi drivers can go into these places only to drop off passengers, not pick them up, according to Muhtar Anshori, general chairman of the Jogjakarta Online Driver Community (PPOJ), as quoted by Kompas.com on June 21.

Impact on people with disabilities

So are these illegal arrangements detrimental to online taxi drivers? In my opinion, no. An online taxi driver, when receiving an order in a red zone, can arrange with the passenger to meet at a secure pickup place outside the “prohibited” zone.

Passengers who need cheaper transportation usually do not mind walking more than 100 meters outside the red zone. That is why they adhere to the red zone agreement.

Online taxis can meet this need. Their app-based nature means a person with a disability does not have to go far outdoors to hail a taxi.

Online taxis are also safer because the identity of the driver and the vehicle number are recorded. In addition, online taxi rates are much cheaper, standardized and do not have to be negotiated.

These things benefit people with disabilities, whose mobility needs usually come at a higher cost.

A red zone arrangement harms those interests. For those who have mobility difficulties, walking to an agreed point outside the red zone is not possible when the physical environment outside stations, terminals, airports, markets and hospitals is inaccessible. Railroad tracks, uneven pavements, stairways, motor vehicle traffic and unintended lighting at night are major obstacles to the mobility of people with disabilities.

The party most disadvantaged by a red zone arrangement is neither the online taxi drivers nor the conventional taxi drivers. People with disabilities are most affected by this illegal scheme. It is therefore incumbent on the state to protect their interests by being more accountable for providing cheaper, safer, more convenient and accessible transportation options.