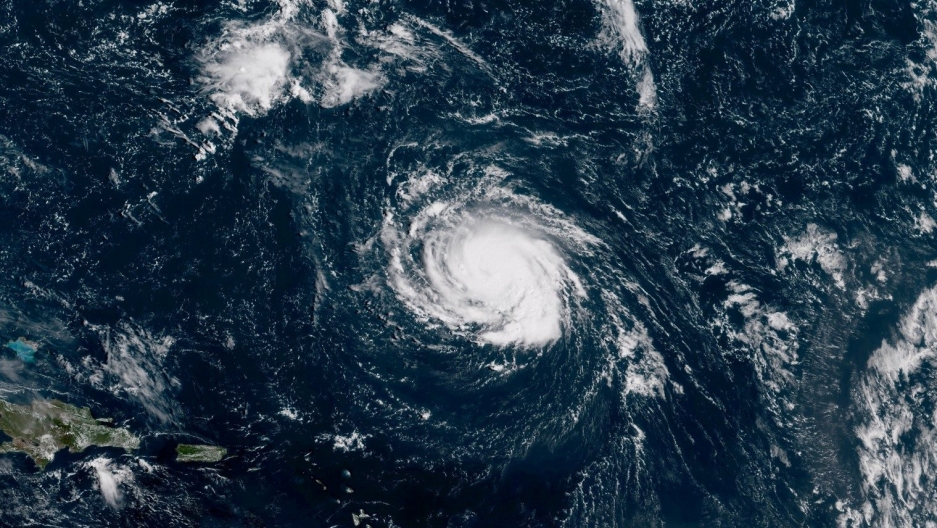 Hurricane Florence seen over the Atlantic Ocean, about 750 miles southeast of Bermuda in this handout photo provided by the National Oceanic and Atmospheric Administration on September 9, 2018.

South Carolina on Monday ordered an estimated 1 million people to evacuate its coast as the state and neighboring North Carolina brace for a hit from Hurricane Florence, the most powerful storm to take aim at the US mainland this year.

The storm had winds of 130 miles per hour and was due to gain strength before making landfall, which the US National Hurricane Center said was likely to occur early Thursday in the Carolinas, bringing heavy rain that could cause severe flooding through the region.

"We do not want to risk one South Carolina life in this hurricane," Governor Henry McMaster said at a news conference.

He estimated about 1 million people would be fleeing the coast.

In North Carolina, officials already had ordered some 250,000 residents and visitors to begin evacuating the Outer Banks barrier islands.

"We are in the bull's-eye," North Carolina Governor Roy Cooper said at a news conference. "This is going to be a statewide event."

The United States was hit with a series of high-powered hurricanes last year, including Hurricane Maria, which killed some 3,000 people in Puerto Rico, and Hurricane Harvey, which killed about 68 people and caused an estimated $1.25 billion in damage with catastrophic flooding in Houston.

By noon EDT on Monday, Florence was about 1,170 milessoutheast of Cape Fear, North Carolina, and was a Category 4, the second-strongest on the Saffir-Simpson scale, the NHC said.

Cooper said he had asked Trump to declare a federal state of emergency for North Carolina.

Florence could bring a life-threatening coastal storm surge, and inland flooding as far north as Virginia, the NHC said.

Historically, 90 percent of fatalities from hurricanes, tropical storms and tropical depressions have been caused by water, said NHC spokesman Dennis Feltgen said. Some 27 percent of the deaths have come from rain-driven flooding, sometimes hundreds of miles inland.

In Holden Beach, North Carolina, in the storm's path, longtime residents could be seen boarding up homes and securing possessions.

"It's scary to all of us. We know we can't play around with this," said Jennifer Oosterwyk, who owns the Sugar Britches boutique on Holden Beach and lives in nearby Wilmington.

Oosterwyk was gathering tax documents and other important papers from her store on Monday, and said she planned to drive 150 miles inland to ride out the storm in Cary.

As the storm advanced, Monday afternoon was a postcard-perfect day on Holden Beach with bright blue skies, placid puffy clouds and light breezes. By 2 p.m. EDT, the surf that had been calm began to show some chop.

The US military said it was sending an advanced team to Raleigh, North Carolina, to coordinate with federal and state partners and that about 750 military personnel will be designated to provide support.

The US Navy said it was sending nearly 30 ships from coastal Virginia out to sea to avoid damage.

Wall Street was trying to pick winners and losers from the storm.

Several insurers seen vulnerable to potential claims losses slipped, led by a 2 percent drop in Allstate and a 1.8 percent decline in Travelers.