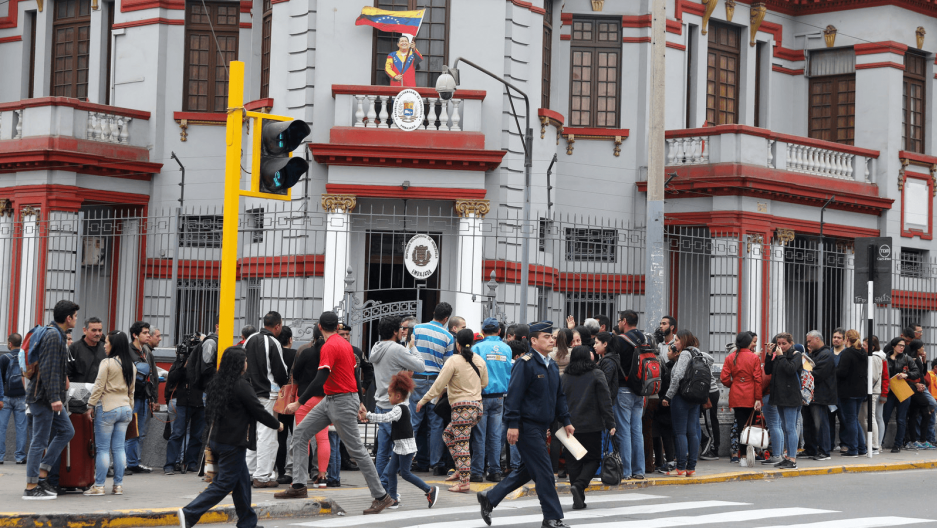 Venezuelan migrants wait outside their embassy to register to a fly to return to their country, in Lima, Peru, Sept. 5, 2018.

Dozens of Venezuelans who fled their crisis-stricken country for Peru are seeking to take up a Caracas offer to fly them home, as Venezuelan President Nicolás Maduro seizes on hardships migrants face abroad to shore up domestic support.

Around 100 Venezuelans were waiting in line outside the Venezuelan embassy in Lima on Wednesday to secure “repatriation cards” needed for a free flight home, according to a Reuters witness.

Several Venezuelans in the line that Reuters spoke to described suffering discrimination and poor working conditions in Peru, an Andean country of 32 million people where some 300,000 Venezuelan migrants have migrated this year alone.

Venezuelan migrant Endri Avendano, a 30-year-old former medical technician, said he eked out a living as a waiter and by selling food on the street when he arrived in Lima in May.

"You have to work more than eight hours, sometimes 12 hours" a day, Avendano said, adding he could no longer find work. He was seeking to return to Venezuela even though food was scarce and expensive there, he said.

Maduro has denied his citizens are fleeing to escape food and medical shortages in Venezuela. He said on Monday that opposition street protests and US financial sanctions had led some Venezuelans to "try their luck" in other countries, but that most now regret doing so.

Óscar Pérez, a former opposition lawmaker in Venezuela who now lives in Peru and advocates on behalf of Venezuelan migrants, called the repatriations a "new show" by Maduro intended to discredit his regional critics.

"It's a perverse plan. Maduro is offering jobs in public administration, repatriation cards, social welfare for those that support him," Pérez said.

Maduro said on Wednesday that a plane carrying Venezuelans seeking to return from Quito had already arrived in Caracas, and that another was expected shortly from Lima.

The exodus of Venezuelans to South American countries is building toward a "crisis moment" comparable to events involving refugees in the Mediterranean, the United Nations said last month.

Some 2.3 million Venezuelans are living abroad and more than 1.6 million have left since 2015, according to the UN.