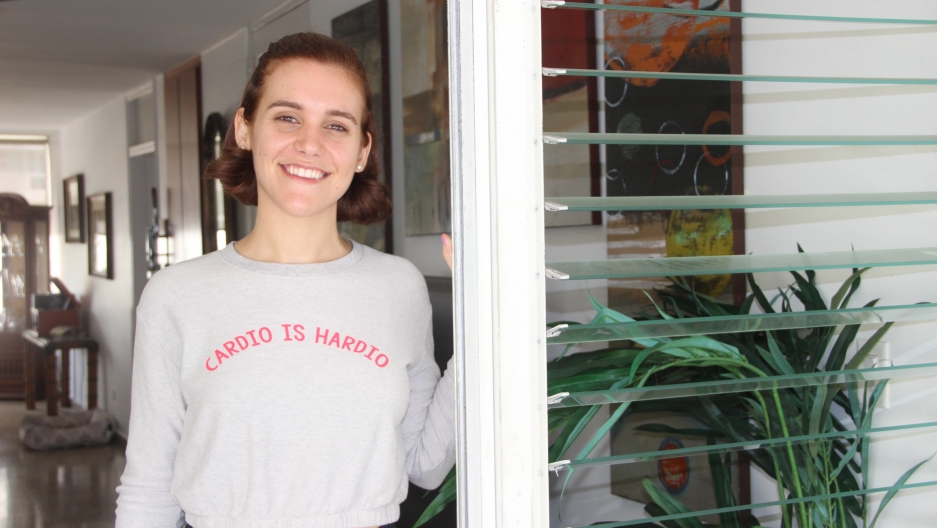 After Hurricane Maria cause widespread destruction in the Caribbean last September, colleges and universities from New York to Florida offered free or discounted tuition to Puerto Rican students whose home institutions were closed after the storm.

One of the first students to take advantage of the offer was Rosamari Palerm, who enrolled at Miami’s St. Thomas University at the end of September and moved into her new dorm room just a few days later.

“Coming from [having] no signal, no water, no light, sweating so much because of the humidity, coming here was like a big relief,” Palerm told The World last October.

Palerm was happy to be able to keep up with her classes while life back home in San Juan was still essentially on pause, but she always knew she wanted to move back to Puerto Rico eventually.

It turns out she didn’t have to wait years. Her school in San Juan reopened in January and Palerm decided to leave St. Thomas University at the end of the fall semester. She had been there less than three months.

“Obviously it was an opportunity and I was very grateful for St. Thomas and everything they did,” Palerm told The World in San Juan in late August, “but as soon as I saw a window to come back home I’m like, 'Yes, I need my island, my family, my friends.'"

“As soon as I got off the plane, I started crying,” Palerm said, laughing. “I was so happy.”

Palerm moved back in with her parents, brother and two Dachshunds, Lupe and Stella, in their modern apartment in San Juan. 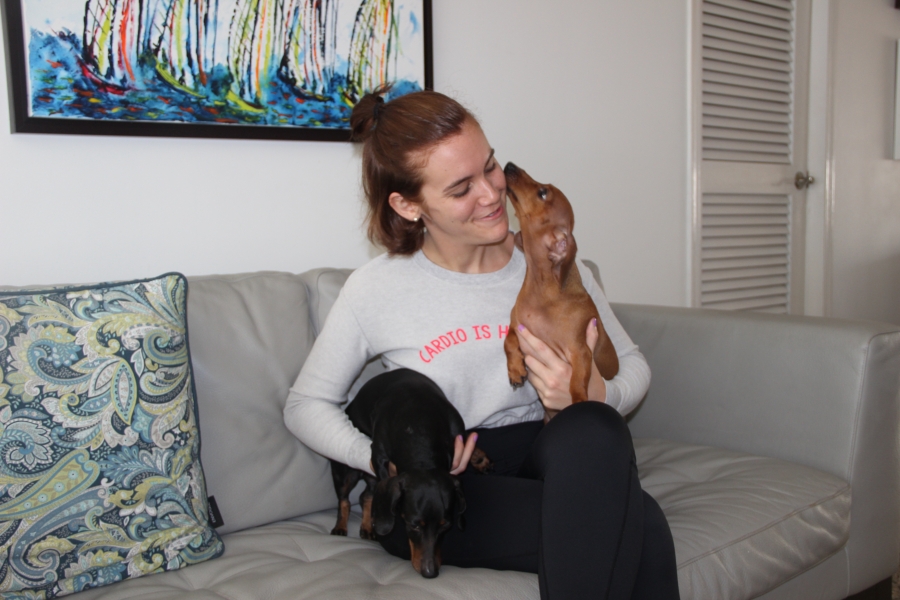 Rosamari Palerm with her dogs Lupe and Stella at her family’s apartment in San Juan.

She started classes at Universidad del Sagrado Corazón (University of the Sacred Heart) in San Juan in January as the campus was being repaired around her.

“You see a lot of construction, they’re fixing a lot of areas of the university, making it better,” said Palerm, who just started her final term at the school. “The light would go on and off, they would sometimes cut the water because they were fixing something. So, it’s always something getting fixed. Getting better.”

The same could be said for Palerm's neighborhood in Condado, a trendy, tourist-friendly part of San Juan just a few blocks from the beach. A favorite park down the street from Palerm’s apartment has lost most of its trees, but those that remain are starting to regrow tiny branches.

“It’s cool to see it slowly coming back,” Palerm said while walking through the park.

On a busy commercial street nearby, there are several empty storefronts in a row with “For Lease” signs in the windows, all shops and restaurants that closed after Hurricane Maria and never reopened. But new businesses are slowly starting to take over the vacated spaces.

"This used to be also for lease,” Palerm said, pointing to a new restaurant on the block. “I haven’t seen this, this is new.”

Another sign of recovery in the neighborhood: the red, white and blue of Puerto Rican flags fluttering everywhere you look. 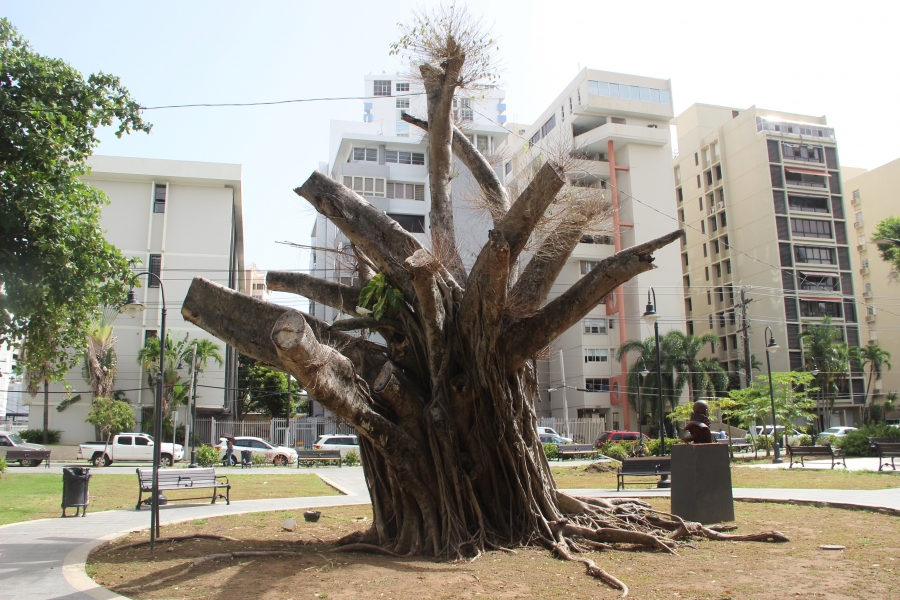 Tiny new branches grow out of a tree damaged during Hurricane Maria at Stella Maris park in San Juan.

After Hurricane Maria, dozens of private schools, and state college and university systems in Florida, New York and Connecticut gave tuition breaks to Puerto Rican students. Demographers warned this could help add to Puerto Rico’s exodus, hurting the odds that the island would “rise again.”

Some tuition discounts ended last spring, but many still continue, including at schools within the New York and Connecticut state university systems and at St. Thomas University, where Palerm went. Forty-five students, more than half of those who enrolled through the hurricane relief program last year, are staying on this fall, including sophomore business major Luis Avilés.

He has a much less optimistic view of Puerto Rico than Palerm does.

“I went back only for two weeks in the summer, and the things in Puerto Rico, they’re not good,” Avilés said.

His car got stolen while he was back home.

“And that’s when I said, 'You know what, I’m not going to stay here [in Puerto Rico],'” Avilés said. “I don’t feel safe in the island and my family and everyone’s like, 'If you’re making it better for you, just stay over there.'”

Even with free room, board and books and a 50 percent discount on tuition at St. Thomas, Avilés still expects to pay twice as much for school in Florida as he would in Puerto Rico. He’s working up to 60 hours a week at an auto garage to help pay his tuition.

Jobs draw graduates back to Florida

Estimates of how many Puerto Ricans left the island after Hurricane Maria vary widely, with most estimates putting the number somewhere between 200,000 and nearly 400,000.  There’s no count of how many students who transferred to schools on the mainland have stayed. But it’s clear Avilés isn’t the only one. 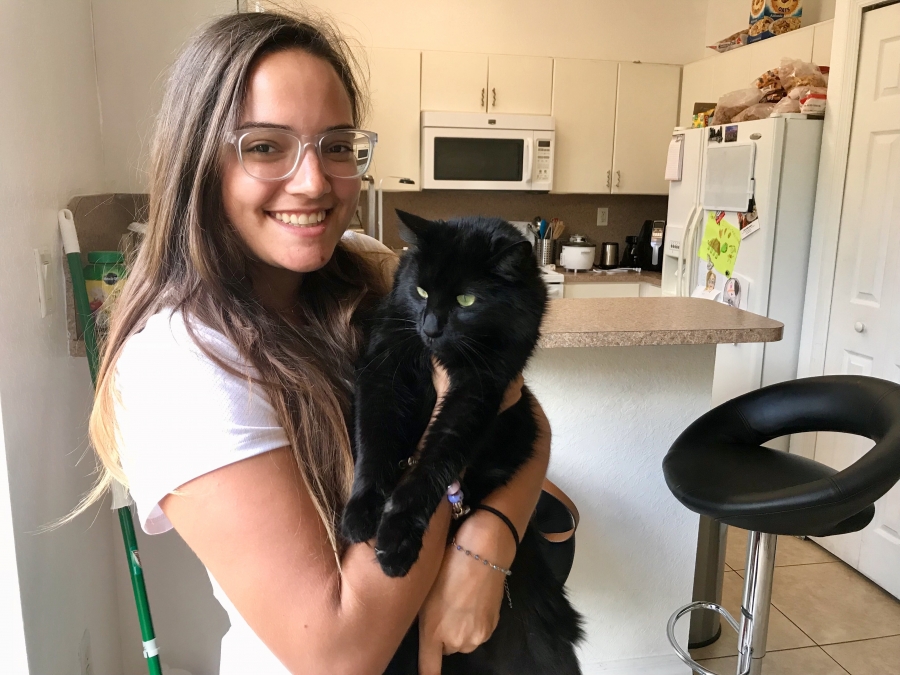 Victoria Angulo, here at home with her cat Maui, came back to Miami to work shortly after she graduated from St. Thomas University in December.

“I thought I was about to graduate and then stay in Puerto Rico,” said Victoria Angulo, who graduated from St. Thomas University with a psychology degree last December. “And then I went to PR for about three weeks. The opportunities there in jobs was definitely … there weren’t much.”

So Angulo came back to Miami and is now teaching at a Catholic school in Miami. She says her semester in Florida improved her English and taught her some key professional skills that helped her land the job.

“Thanks to St. Thomas, I have what I have right now, the job that I have, the experience,” Angulo said. “If it wasn’t because of Hurricane Maria, I wouldn’t have had it.”

Angulo just started a master’s program and plans to stay in Miami for the foreseeable future.

Back in San Juan, Rosamari Palerm will finish college in December and plans to take the MCAT in February and apply to medical school. She says the hurricane has taught her to be more flexible with her plans.

“Now, if I decide I’m going to med school, I’m like, so if this happens, like another hurricane, what’s my plan B?” Palerm said. “I have to strategize what I’m going to do, just in case something happens. So now it’s like, plan A, B, C, D.”

Medical school may take her back to the mainland, but her endgame is the same as it was a year ago, when she moved into what would be a very temporary dorm room in Miami: help Puerto Rico rise again.

“After I graduate, I want to work here, I want to stay, I want to raise my family if I ever get that opportunity here,” Palerm said. “I love my home, and I want to see it get better, not worse.”