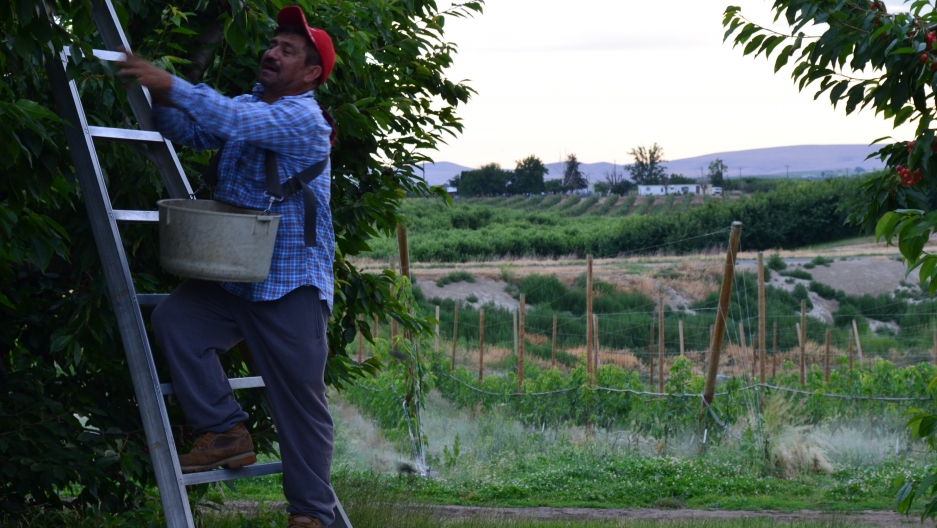 It’s 5 a.m. and light is just beginning to show behind the brown desert hills that surround the Yakima Valley. Patricia and Javier just arrived to work at Sonrise Orchards. They’re placing their ladders among the thick green leaves of the cherry trees.

Patricia and Javier both came from the same town in Mexico but they met in the fields of California when they were picking crops. They asked to be identified only by their first names because they’re undocumented.

Javier whistles as his fingers fly from tree to crate, pulling down clumps of cherries. He says he and Patricia like working here — in part because cherry-picking is some of the easiest and best-paid work they do: They can make $200 each in an eight-hour day.

And, Javier says, the owners of this orchard don’t use a lot of pesticides. That’s unusual.

Right now, Washington cherries are on grocery store shelves across the country. After that, there will be Washington apples and pears. Americans get a huge share of these fruits from Washington's agricultural regions.

Immigrants pick these crops, as they do in the rest of the country. In Washington’s Yakima Valley, the pesticides they’re exposed to while working in the orchards can carry risks for not only them, but also for their children. 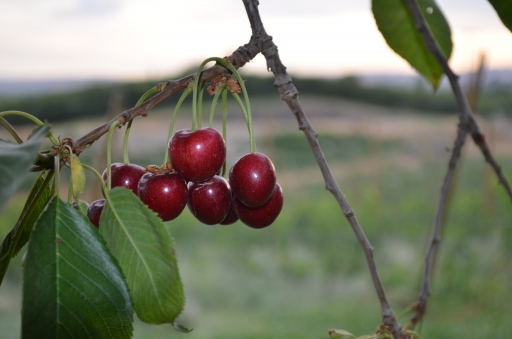 Washington produces a huge portion of the fresh cherries eaten in the US.

Javier says just three weeks ago, he and Patricia were working in a nearby orchard where the pesticides were so strong his wife got very sick.

“It itched,” he remembers. “Patricia got a terrible reaction. She couldn’t work there was so much spray.”

Patricia’s brother came to get her after she’d been there only an hour.

The orchard where they’re working today may have fewer pesticides, but Patricia and Javier still wear handkerchiefs over their mouths to protect themselves.

Patricia and Javier began taking more precautions when their daughter Azul got sick as a baby.

“She couldn’t breathe,” she says. “She had a fever. Her temperature kept rising.”

Patricia thought they would lose her. They brought her to the emergency room, where doctors got the child’s symptoms under control. But a week later, Azul stopped breathing again.

“By the time Azul was 5,” Patricia says, “she lived in the emergency room.”

For many years, Azul didn’t have a diagnosis, but Patricia noticed that the dust on her work clothes seemed to make her daughter’s symptoms worse. She thought it might be the pesticides, so she stopped working altogether.

“I couldn’t come home like that and hug her,” Patricia explains.

That meant the family was living on less than $500 a week.

When Azul was five, doctors finally figured out the little girl had asthma. That’s become a big problem among children of farm workers, says Dr. Catherine Karr of the University of Washington.

“There’s kids who have a lot of clinic visits, a lot of ER visits, hospitalizations,” she explains.

Karr is a pediatrician who’s been researching asthma in Yakima’s farm worker communities. She says rural asthma is not well understood, but kids in Yakima are as likely as kids in other parts of Washington state to have asthma — and they’re less likely to get their disease under control, and more likely to die from it.

“We were interested in understanding asthma in this context — in a rural agricultural community — which has not been the focus of most asthma studies, which take place in cities and in highly industrialized settings with lots of traffic,” she says.

It’s unclear why asthma rates are high in a place without many factories or cars. The earliest studies on asthma in farm worker communities were done in Europe. They found lower rates of asthma than in cities. Scientists think that might be because contact with farm animals helps boost kids’ immune systems.

But, in the US, farm workers’ children tend to have less contact with animals — and more contact with pesticides. Some research indicates that exposure to certain pesticides —especially a class of pesticides called organophosphates — can increase kids’ asthma risk.

The use of these pesticides is declining in general, but, in Washington state, they help control pests that can destroy entire orchards that are expensive to replace.

“If you talk about a typical orchard of a couple hundred acres, we’re talking about multimillion dollar investments,” says Jon Devaney, the president of the Washington Tree Fruit Association. He says Washington farmers have been looking for less toxic ways to preserve their valuable crops.

“One of the issues that growers have, though, is they need something with which to replace what’s going away if they’re going to be successfully growing the crop,” he explains. “And it takes awhile for new products to go through that lengthy EPA review process.”

DeVaney says Washington’s fruit exports to Europe are way down because Europe has phased out some older pesticides without approving any replacements. 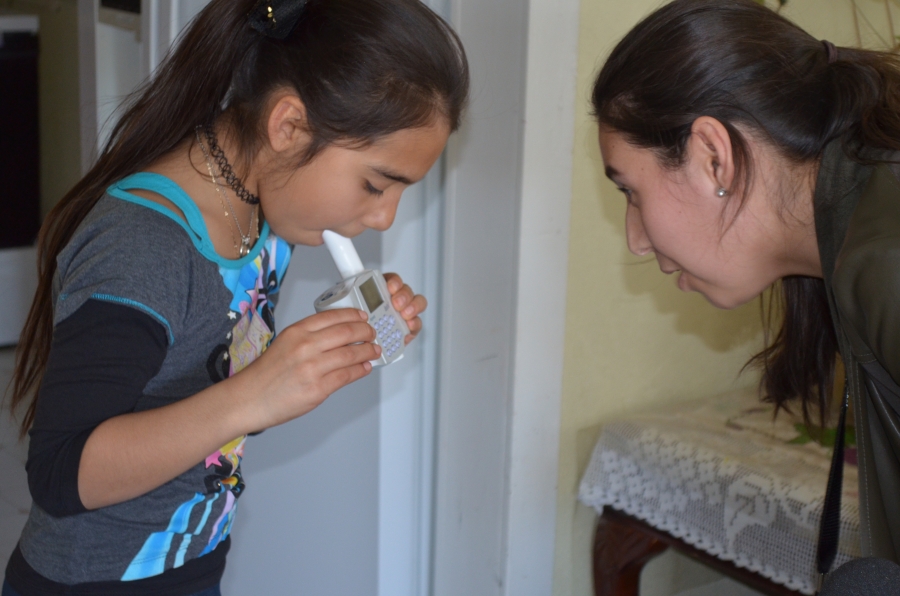 Azul, now 10, gets breathing tests from community health worker Adriana Pérez. Pérez is part of a regional study to figure out how best to control the asthma of farm workers’ kids.

All the kids get coached on how to control their asthma and half also get home air purifiers. The goal is, if the air purifiers work, doctors could prescribe them — and insurance would pay.

Since the study began, Azul is doing a lot better and rarely goes to the emergency room. Even so, her mother, Patricia, often checks on her in her sleep.

Patricia says she’s still scared that, at any moment, her daughter could stop breathing.