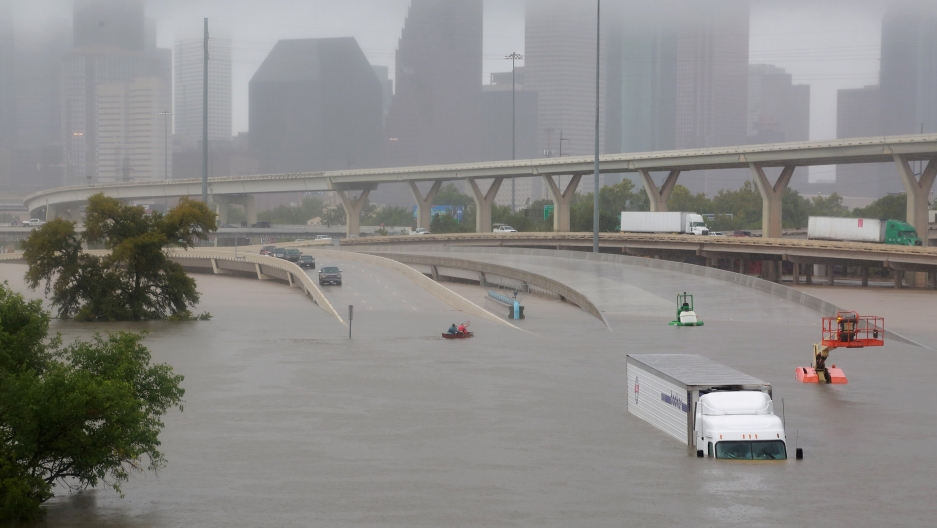 Interstate highway 45 is submerged from the effects of Hurricane Harvey seen during widespread flooding in Houston, Texas. Photographed on August 27, 2017.

A year ago, Hurricane Harvey devastated parts of Houston and other cities in Texas. Thousands of families spent their days salvaging what they could from their homes.

Among them was Silvia and her family, who lost their apartment to the flooding. We met as Silvia spent a hot afternoon trying to save what the waters spared.

“We’re just here taking out, saving what we can,” she said.

It wasn’t much, apart from some shoes and a few chairs.

Silvia also worried about where her kids, two young girls and two boys, would sleep that night. A large convention center nearby had been converted into a shelter. Why not go there? “No,” Sylvia said. “That’s complicated. I wouldn’t feel safe there.”

Silvia has lived in Texas for nearly 20 years, but she is undocumented, from Guatemala. Because of her status, she requested to be identified by only her first name. She worried about the security presence at the shelter, the police and federal agents, and whether she would be asked for her papers and risk deportation. It was the case for many undocumented immigrants in need.

A year later, after staying with friends, Silvia and her family have a new apartment in the same neighborhood, just one complex over from their old home. 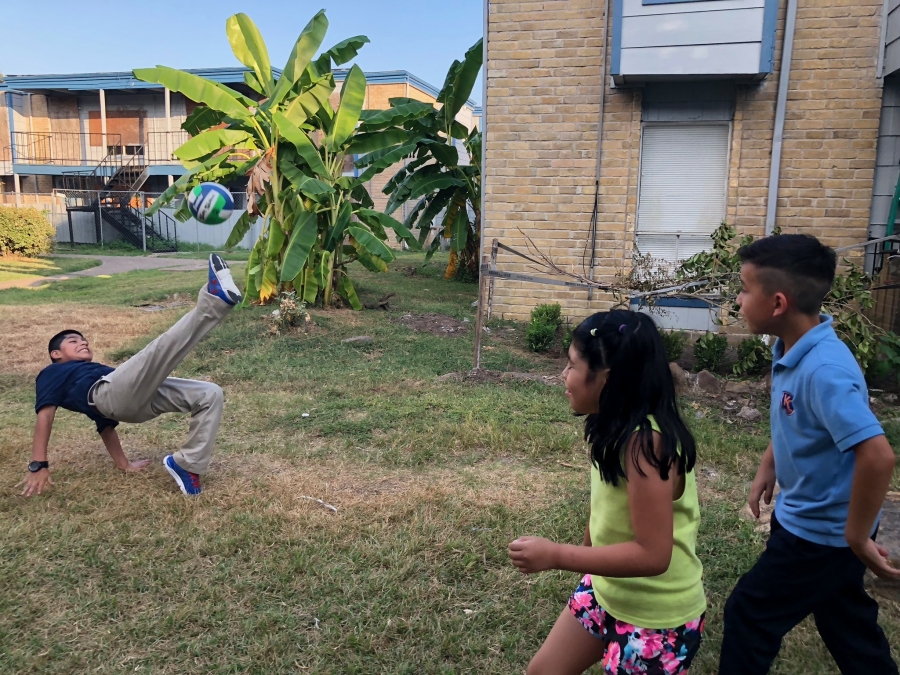 Joshua, left, plays soccer with his sister and a friend near his new apartment in Houston. His family lost their apartment because of the flooding during Hurricane Harvey, which struck Houston and other cities in Texas in late summer of 2017.

The living room is still sparsely furnished, except for a television and a fan running at full blast. It’s a sweltering afternoon with temperatures topping 100 degrees. “The air conditioning doesn’t really work,” Silvia says.

Silvia and her girls point to what’s been donated, including their kitchen table and a basket of toys. There are also two beds. The boys share one mattress; Silvia and the two girls share the other.

It’s been a slow recovery. The family doesn’t have insurance, and they did not try to access official aid. “I don’t feel comfortable giving the government my information,” she says. It seems risky considering her undocumented status, she added.

Instead, the family has relied on donations, their church and bargains from the Dollar Store nearby. Silvia has decorated the apartment with art — prints of sunflowers, orchids, a Yosemite landscape — in old frames that she has rescued from the trash, the sidewalks or bought for cheap at yard sales. “People throw away beautiful things,” she says.

There is also one big difference with the new apartment — it’s on the second floor. Silvia pauses when asked if she feels safer here, higher from the ground when the next storm hits. That's because Hurricane Harvey wasn't the first time the family had lost their home. It happened in 2015 when a tornado struck this part of Houston and ripped through Silvia’s home.

“Look around here,” she says, pointing to other apartments in the complex. “See how there are windows boarded up? That’s not from Harvey — that’s from the tornado.”

So here she is again, post-disaster. But this time, she is without her husband. He was deported to Honduras before the hurricane. Sylvia’s 13-year-old son Joshua, who’s a US citizen, hopes to visit his dad next summer. He would fly there alone. “We talk most every day, but I really want to see him,” said Joshua. “My mom is saving and says that if I get good grades, I can go.”

Meantime, someone new has joined the family: Silvia’s older son. He's 19, Silvia says, fled gangs in Guatemala and is now seeking asylum. This spring, he earned his high school diploma in Houston. When I visited, her son was working construction, supplementing what Silvia makes cleaning houses so they can make the $700 rent.

I asked Silvia how surviving these disasters has changed her life. “A lot,” she says. “What we have today could be gone tomorrow. “

For now, she appreciates some stability, and hopes it stays that way.