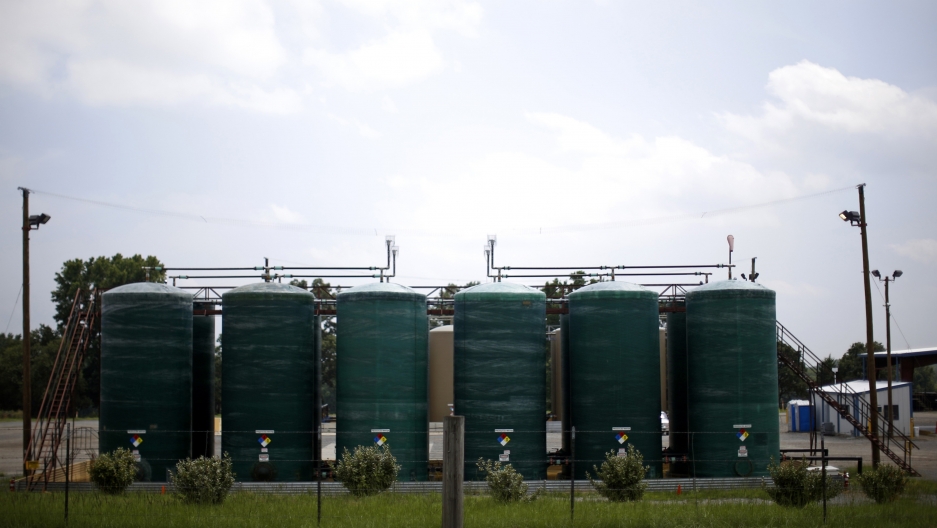 The treatment tanks at the SRE salt water disposal well are seen in Guy, Arkansas, August 6, 2013.

Earthquakes in the central and eastern United States have increased dramatically in the last decade as a result of human activities. Enhanced oil recovery techniques, including dewatering and hydraulic fracturing, or fracking, have made accessible large quantities of oil and gas previously trapped underground, but often result in a glut of contaminated wastewater as a byproduct.

Energy companies frequently inject wastewater deep underground to avoid polluting drinking water sources. This process is responsible for a surge of earthquakes in Oklahoma and other regions.

The timing of these earthquakes makes it clear that they are linked with deep wastewater injection. But earthquake scientists like me want to anticipate how far from injection sites these quakes may occur.

In collaboration with a researcher in my group, Thomas Goebel, I examined injection wells around the world to determine how the number of earthquakes changed with the distance from injection. We found that in some cases wells could trigger earthquakes up to 10 kilometers (6 miles) away. We also found that, contradictory to conventional wisdom, injecting fluids into sedimentary rock rather than the harder underlying rock often generates larger and more distant earthquakes. 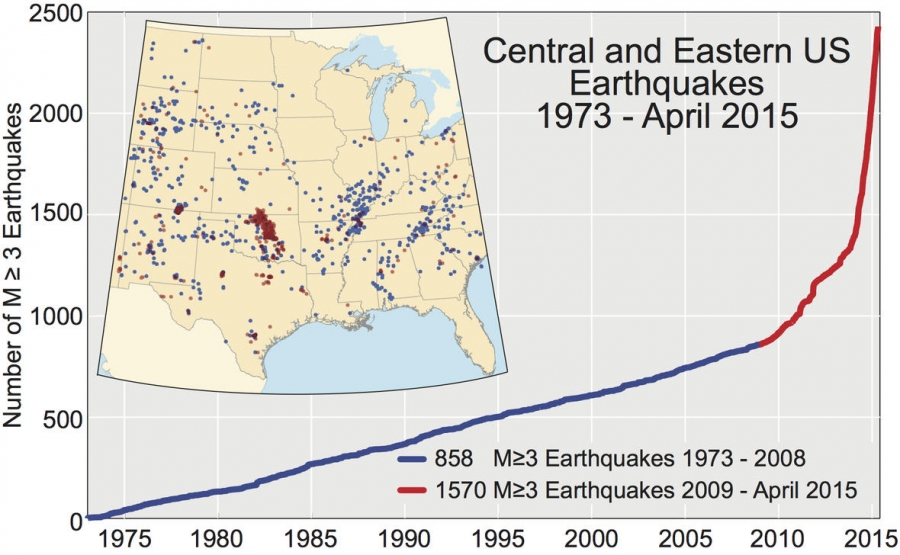 Cumulative number of earthquakes with a magnitude of 3.0 or larger in the central and eastern United States, 1973-2015.

Assessing how far from a well earthquakes might occur has practical consequences for regulation and management. At first glance, one might expect that the most likely place for wastewater disposal to trigger an earthquake is at the site of the injection well, but this is not necessarily true.

Since the 1970s, scientists and engineers have understood that injecting water directly into faults can jack the faults open, making it easier for them to slide in an earthquake. More recently it has become clear that water injection can also cause earthquakes in other ways.

For example, water injected underground can create pressure that deforms the surrounding rock and pushes faults toward slipping in earthquakes. This effect is called poroelasticity. Because water does not need to be injected directly into the fault to generate earthquakes via poroelasticity, it can trigger them far away from the injection well.

Deep disposal wells are typically less than a foot in diameter, so the chance of any individual well intersecting a fault that is ready to have an earthquake is quite small. But at greater distances from the well, the number of faults that are affected rises, increasing the chance of encountering a fault that can be triggered.

Of course, the pressure that a well exerts also decreases with distance. There is a trade-off between decreasing effects from the well and increasing chances of triggering a fault. As a result, it is not obvious how far earthquakes may occur from injection wells.

To assess this question, we examined sites around around the world that were well-isolated from other injection sites, so that earthquakes could clearly be associated with a specific well and project. We focused on around 20 sites that had publicly accessible, high-quality data, including accurate earthquake locations.

We found that these sites fell into two categories, depending on the injection strategy used. For context, oil and gas deposits form in basins. As layers of sediments gradually accumulate, any organic materials trapped in these layers are compressed, heated and eventually converted into fossil fuels. Energy companies may inject wastewater either into the sedimentary rocks that fill oil and gas basins, or into older, harder underlying basement rock.

At sites we examined, injecting water into sedimentary rocks generated a gradually decaying cloud of seismicity out to great distances. In contrast, injecting water into basement rock generated a compact swarm of earthquakes within a kilometer of the disposal site. The larger earthquakes produced in these cases were smaller than those produced in sedimentary rock.

This was a huge surprise. The conventional wisdom is that injecting fluids into basement rock is more dangerous than injecting into sedimentary rock because the largest faults, which potentially can make the most damaging earthquakes, are in the basement. Mitigation strategies around the world are premised on this idea, but our data showed the opposite. 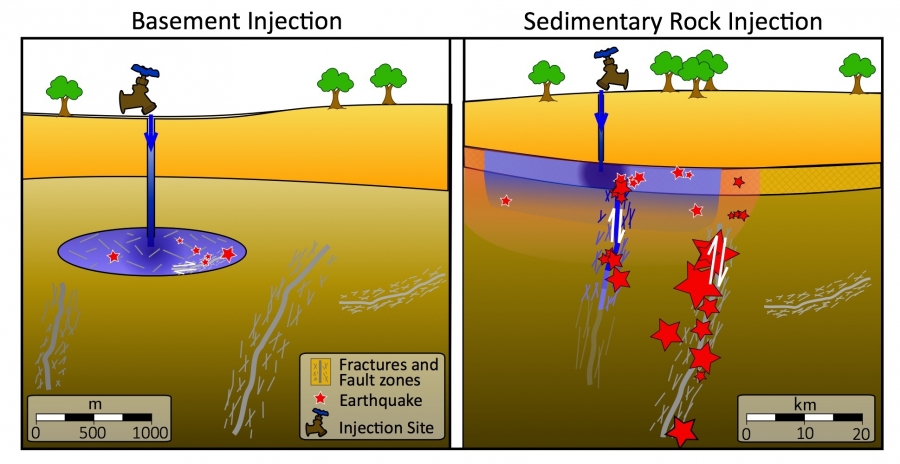 How wastewater injection can make earthquakes: In basement rocks, left, injection activates faults in the small region directly connected to the added water, shown in blue. In sedimentary injection, right, an additional halo of squeezed rock, shown in red, surrounds the pressurized fluid and can activate more distant faults.

Why would injecting fluids into sedimentary rock cause larger quakes? We believe a key factor is that at sedimentary injection sites, rocks are softer and easier to pressurize through water injection. Because this effect can extend a great distance from the wells, the chances of hitting a large fault are greater. Poroelasticity appears to be generating earthquakes in the basement even when water is injected into overlying sedimentary rocks.

In fact, most of the earthquakes that we studied occurred in the basement, even at sedimentary injection sites. Both sedimentary and basement injection activate the deep, more dangerous faults – and sedimentary sequences activate more of them.

Although it is theoretically possible that water could be transported to the basement through fractures, this would have to happen very fast to explain the rapid observed rise in earthquake rates at the observed distances from injection wells. Poroelasticity appears to be a more likely process.

Our findings suggest that injection into sedimentary rocks is more dangerous than injecting water into basement rock, but this conclusion needs to be taken with a rather large grain of salt. If a well is placed at random on Earth’s surface, the fact that sedimentary injection can affect large areas will increase the likelihood of a big earthquake.

If a well does inject directly into a basement fault, an anomalously large earthquake can occur. The magnitude 5.4 Pohang earthquake in South Korea in 2017 occurred near a geothermal energy site where hydraulic injection had recently been carried out.