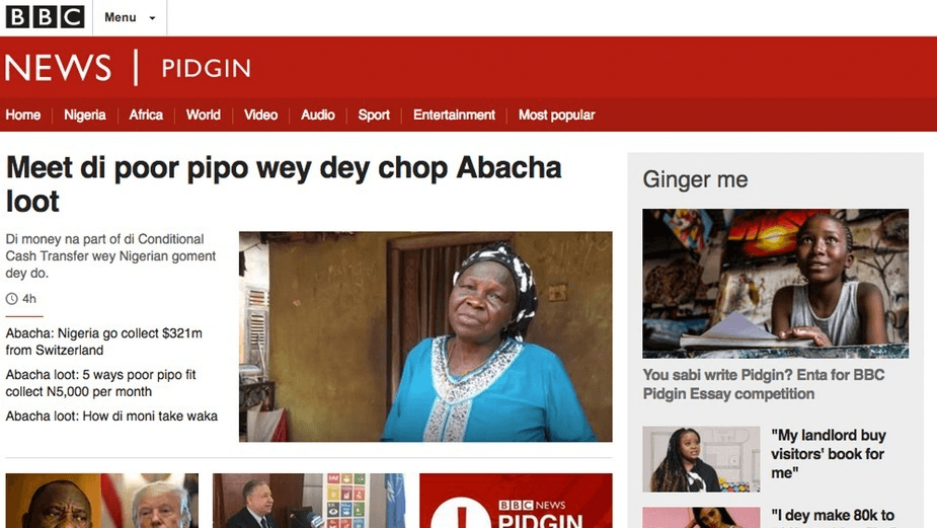 The BBC World Service’s radio service of English-based pidgin for West and Central Africa, BBC News Pidgin, is now a year old. And it’s thriving. According to the broadcaster, News Pidgin reaches a weekly audience of 7.5 million people in Nigeria and around the world on radio, online, Facebook and Instagram.

Even though pidgin hasn’t got the official status of a recognized language anywhere, it’s widely spoken across West Africa. Between three and five million Nigerians use it as their first language, while a further 75 million have it as their second language.

Today, variations of pidgins are used in all spheres of life ranging from political campaigns, television and radio broadcast. They are also taught in some tertiary institutions, used in music and other works of art and even speeches by public officials.

Pidgin refers to what’s known as a trade language that emerged as a mixture of languages to help people who don’t have a common one to communicate with one another. In West Africa these mixes include English and French, on the one hand, and local languages on the other. The mixing has developed into lingua franca of the region.

The BBC’s decision to launch a service in pidgin should be applauded. Pidgins deserve full recognition because they’re being spoken by a sizeable number of people in West Africa. Governments in the region should take a page out of the broadcaster’s book and ensure the different versions are codified and standardized in both their formal and informal uses. They should be granted official status.

Some, if not all, of these pidgins have outgrown their status as pidgins. But they are still called pidgin. One of the reasons is that there’s a view that pidgin doesn’t have native speakers. This isn’t true. In West Africa, children and adults use pidgins as their first language. These pidgins are now creoles — a language that was a pidgin but has become a first language for a new generation of speakers.

In Nigeria, for example, Pidgin is viewed as being the language of illiterates even though it’s used by both educated and uneducated people in formal and informal activities. It has featured prominently in culture, from Afrobeat superstar Fela Kuti’s urban dance music to highbrow opera like in Nigerian-born singer Helen Parker-Jayne’s "Song Queen: A Pidgin Opera."

The vocabularies of pidgins evolve all the time to meet the communicative needs of their speakers. The BBC Pidgin experiences this fluidity in practice, as its head, Bilkisu Labran, explains: "It keeps changing all the time and it’s expressive as well. Sometimes, if you don’t have a word for something, you can just create an onomatopoeic sound and just express yourself. And it will be appreciated and understood."

The bulk of the lexical items found in these pidgins is from the foreign language spoken locally while the others are from indigenous languages. These pidgins also rely on the tones, pitch and nasality of the indigenous languages for proper pronunciation and use. This means that every sentence an average West African uses in pidgin has a bit of the local language (any of the West African languages) fused into it.

The pidgins also try to maintain the phonetics of the West African languages. For example:

This is a Nigerian Pidgin way of asking “what is happening?” or “what happened?” “Wetin’” is a distortion of “what” or “what is”, while “hapun” is spelled as pronounced.

This means “the car is fairly used,” “the car is second hand” (Nigerian English) or “it is a used car.” The word “tokunbọ” is borrowed from the Yoruba language but used to describe fairly used items in the Nigerian Pidgin.

Pidgins are viewed positively, negatively or with indifference. Some view them as languages that have helped to bridge the communication gap between them and others. Others view them as inferior languages and believe that those who use them are also inferior. The elites pretend not to have anything to do with them.

But these negative attitudes are changing in West Africa. The pidgins spoken in the region are unique, showing that they have come to stay no matter what some say or feel about them. The pidgins are expanding on a daily basis as new lexical items are introduced into them.

Edosa James Edionhon is a lecturer of linguistics at the University of Benin.

Editor's note: PRI partners with the BBC to produce PRI's The World.