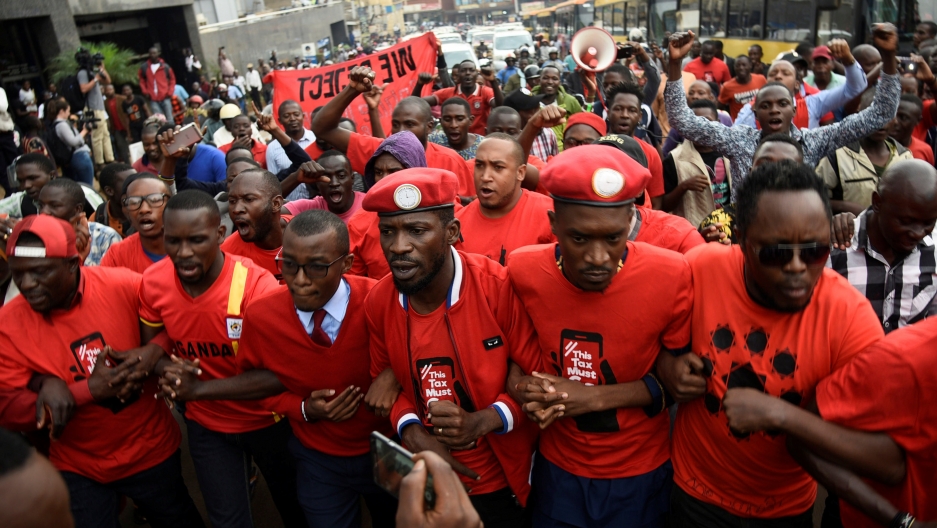 Protests erupted in the Ugandan capital on Friday after police detained two lawmakers at the international airport as they prepared to travel abroad for medical care, witnesses said.

People demonstrated in different parts of Kampala, burning tires and piling rocks and other barricades in the middle of the roads. Police said the protests were limited and had been contained.

The lawmakers, Robert Kyagulanyi and Francis Zaake, say they were tortured by security forces while in detention in August. The case led to protests against President Yoweri Museveni.

Museveni has won praise in the West for his support against militant Islam in the region, but many Ugandans regard the 73-year-old as out of touch with his people, nearly 80 percent of whom are under the age of 30.

Kyagulanyi has been charged with treason over his alleged role in the stoning of Museveni’s convoy this month, but a court had granted him access to private doctors, citing his health.

Kyagulanyi's lawyer Robert Amsterdam told Reuters last week that his client had been left unable to stand after being beaten while in detention. When he appeared in court a day after his lawyer spoke, he was unable to walk without help.

Kyagulanyi, 35, is a musician who entered politics after winning a parliamentary by-election last year. He goes by the stage name "Bobi Wine" and has emerged as a formidable threat to Museveni's 32-year rule, winning popular support through his music and strong criticism of the government.

Amsterdam told Reuters on Friday that Kyagulanyi had said he had been tortured again while being transported from the airport to a hospital in Kampala. "He was beaten ... he was groaning in pain, they kept telling him to shut up," Amsterdam said, quoting what his client had told him.

Friday's demonstrations were most intense in Kamwokya, a suburb of Kampala where Kyagulanyi has a recording studio, according to Dick Nvule, a local radio reporter.

"Protesters blocked the roads using garbage cans and burning tires. Motorists have to get alternative routes to the city center. Soldiers and riot police are still clearing the roads," Nvule told Reuters.

The two parliamentarians were among a group of five lawmakers who were detained on Aug. 13 in the northwestern town of Arua and accused of throwing stones at the presidential convoy while campaigning for a parliamentary seat.

Zaake, the other lawmaker, has not been charged but has been in a hospital in Kampala. Images posted on social media show him lying on a bed, eyes closed, with multiple bruises on his hand and other body areas.

In July, the constitution was amended to remove the presidential age limit of 75 years, meaning Museveni can run again for president in 2021 — the year the country hopes to begin oil production.