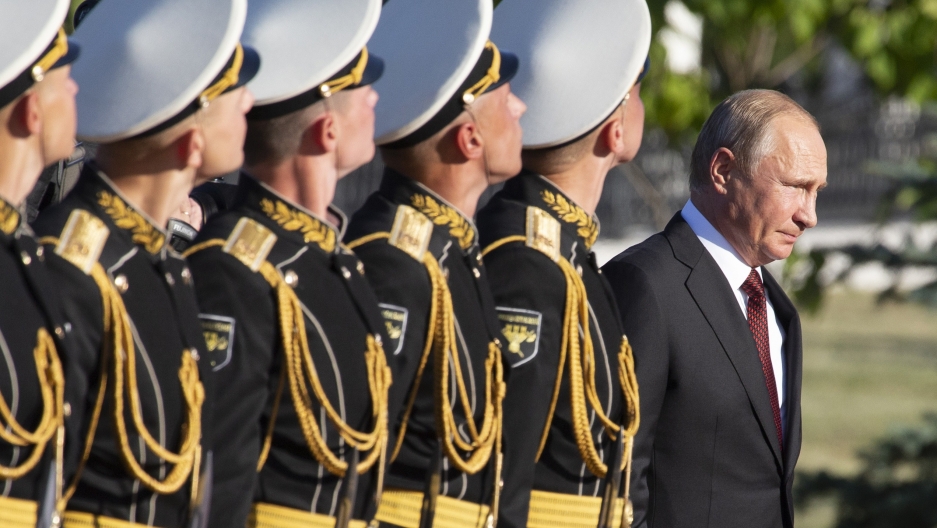 Russian President Vladimir Putin arrives for a wreath laying ceremony to commemorate the 75th anniversary of the battle of Kursk in World War Two, in Kursk, south of Moscow, Russia Aug. 23, 2018.

It was a hot September day. We were dug in to a potato field on the edge of a village somewhere in West Germany, waiting for the next attack.

I distinctly remember Corporal Olding wandering over and saying, “I feel like a potato.”

After two weeks on the exercise — two weeks of being tired, dirty and hungry — it seemed like the funniest thing ever.

It was 1984, and I was an infantryman on Operation Lionheart, still the largest British military mobilization since WWII. We were rehearsing World War Three, specifically what to do if the Soviets invaded the West.

Russia says it’s planning to stage an exercise next month that will dwarf my experience. Lionheart involved 131,565 British and allied troops. The Russians claim almost 300,000 personnel will be participating in Vostok-18.  If that many men and women really are deployed, Vostok-18 will be one of the biggest military exercises in history.

Vostok is the Russian word for "east," and the exercise is taking place in Siberia, not far from the Chinese border. It’s an annual exercise but this year it is double the size of anything previously staged.

In fact, the Vostok exercises were originally designed to deter China. However, China is taking part in this exercise, sending 3,200 elite troops. It’s the first time Chinese troops have taken part in exercises inside Russia.

Most analysts agree that Chinese participation sends a powerful diplomatic signal (especially to the US) that Moscow and Beijing are willing and able to cooperate if the international situation necessitates.

“But it doesn’t mean China and Russia have a military alliance,” says Hong Kong-based defense analyst Song Zhongping. Song told the South China Morning Post that “Beijing will still stick to its rule of being a non-aligned country.”

For all those taking part, the experience will be memorable. You can’t necessarily see the difference between a large-scale and a normal military exercise, but you can definitely feel it. I think that’s largely because you’re rolling across an entire country — in my case, it was Germany.

That’s because no training ground is big enough to handle that many personnel. So, every field and village is in play. We slept in a farmer’s barn one night. We laid communication cables through a wheat field. One afternoon I found myself defending a little old lady’s front yard. She brought us tea between attacks.

One thing that strikes you as a participant of one of these exercises is the sheer novelty of the sights and sounds you witness. I'll always remember nothing is as black as a German forest at night. You can’t see a hand in front of your face.

There is a little edginess to it all, a small element of risk. Accidents are inevitable on an exercise of this scale. There were three fatalities on Lionheart.

One day we marched up and dug in along a canal while we were told a soldier had been crushed by a tank on the same spot a few days before. The soldier had been sleeping on a little rotary on our side of a bridge, and the tank just rolled over.

A soldier in my platoon fell in a trench on one of those dark forest nights and broke his leg. He was evacuated. I was not happy, as I was then ordered to carry his 84mm anti-tank weapon in addition to my rifle.

Siberia is obviously very different from western Germany; it’s far less densely populated and far more rugged. The memories will be different but I’m sure they will make a strong impression.

The remoteness of the Russian exercise is interesting too, as it presents some very real logistical challenges. Folks in the military say "amateurs discuss tactics, professionals study logistics." Analysts will be keen to see how well Russia does in moving 300,000 personnel, 36,000 armored vehicles, 1,000 aircraft and all the ammunition, fuel and food they will need.

The US hasn’t concentrated that many personnel in one place since the First Gulf War in 1991. Its largest peacetime exercise during the Cold War was Reforger in 1988, which only saw 125,000 personnel. You have to go back to the US Army’s exercises in Louisiana in 1940-41 for something comparable in peacetime. Then, the US deployed 400,000 troops.

And Russia is not a rich country, which leads many to ask why it’s spending so much money on an expensive exercise like this. The ostensible reason, as with any exercise, is to test readiness and new weapon systems.

But according to senior Russian lawmaker, Frants Klintsevich, it also sends a signal to Russia’s rivals, especially in Washington. He compared this exercise to a big Soviet one during the Cold War.

"The 1981 drills, which I had the opportunity to participate in, cooled down some hotheads in their time. Now the upcoming Vostok-2018 drills will fulfill the same role," he told Russian news agency, Tass.