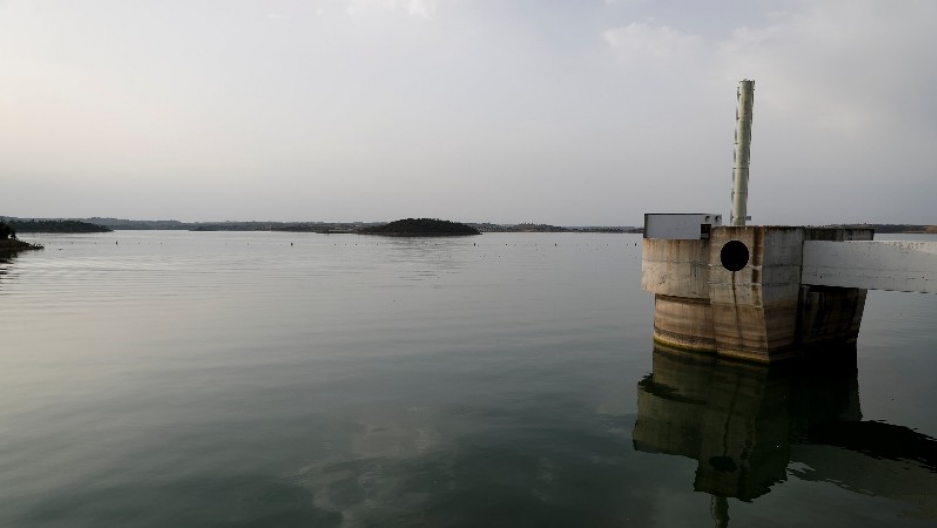 A view of Alqueva reservoir, the largest artificial lake in the EU, near Alqueva, Portugal.

As wildfires scorched California yet again this summer, Jose Dariush Leal da Costa, a Bay Area native with Portuguese roots, was harvesting his first almonds in a sun-drenched, watery oasis in southern Portugal.

The largest artificial lake in the European Union, the Alqueva irrigates an area the size of Los Angeles, luring foreign investors at a time when climate change is fanning droughts from California to northern Europe.

European fruit growers, Spanish olive oil makers, almond and berry farmers from California and Chile, and many others are moving in to rival local farmers on these irrigated lands, whose prices soared by 50 percent in the past five years.

The $5.8 billion irrigation project on the River Guadiana, begun two decades ago to revive the region, is only now reaching its initial design capacity and there are plans to expand it further.

It has also boosted income and jobs in the most disadvantaged region of Western Europe's poorest country.

"We have enough water to the point when I'm five years into a drought and not worried about water," said Leal da Costa, noting that water scarcity was always a worry in California, the world's largest almond producer, where farms compete for water resources with cities and industries.

During a trip to the United States in June, Prime Minister Antonio Costa invited investors in California, which has a climate similar to Portugal, to set up shop around Alqueva in a pitch that played on concerns about global warming.

"It was very effective. In California, land is very expensive and water is very scarce. If you have affordable land and tenable, affordable water, these are the incentives people need," said Rusty Areias, a former California Assemblyman turned investor who met Costa during his visit.

Areias has visited Alqueva and is talking to the government about water rights for potential U.S. investment, including his own, while encouraging farmers in parched Fresno county to diversify their business to Portugal, which is "uncongested and a lot like California was in the 1950s."

Seeking to boost economic growth after being hit by crisis in 2011, Portugal provides cheap loans and other incentives to investors ready to spend more than 500,000 euros and create jobs.

The Alqueva project only this year reached the design goal of selling its water to 80 percent of the area it serves. State firm EDIA, which runs it, plans to expand irrigation coverage by over 40 percent to 170,000 hectares by 2022.

Alqueva has faced environmental complaints, with green groups warning that the flooded areas would destroy wildlife habitats, while the intensive agriculture it encourages would pollute groundwater and soil.

Areas irrigated by Alqueva now stretch almost from the Atlantic coast to the Spanish border.

Salema says water consumption per hectare at Alqueva is half of what it had been designed for, thanks to more efficient growing and watering methods such as drip irrigation.

Still, California investor Areias said water rights in Portugal still need to be made clearer to convince more cautious investors, who need guarantees of water supply for over 20 years.

EDIA estimates foreign investors already work on an estimated 25,000 hectares, a quarter of all Alqueva-irrigated lands in use, having put 250 million euros into crops and equipment.

"There are more jobs, new crops, which is always great for the region," said small-scale local farmer Helder Martins, whose beekeeping business has improved since almond growers started hiring his hives to pollinate their trees.

Unemployment in the wider Alentejo region around Alqueva fell more sharply than anywhere else in Portugal last year to below the average national level, dropping to 8.4 percent.

Almond plantations in the area doubled in size last year to more than 5,500 hectares, with foreign investors dominating new plantings.

Fruit plantations have also expanded strongly to more than 1,000 hectares, helped by investment from Spain, Germany, and Switzerland.

"We have plantations in various European countries and we see that many types of fruit grow a lot faster here," said Joao Serrano, CEO of the Portuguese unit of Swiss-based Fairfruit Group.

But nowhere may escape the impact of global warming for long. Portugal had its own deadly fires last year after a three-year drought, with a big blaze south of Alqueva this year.

In a scenario of more frequent and longer droughts, an expanded Alqueva may no longer be sustainable by 2030-2040, requiring tough conservation efforts, said Prof. Ricardo Serralheiro of the University of Evora.