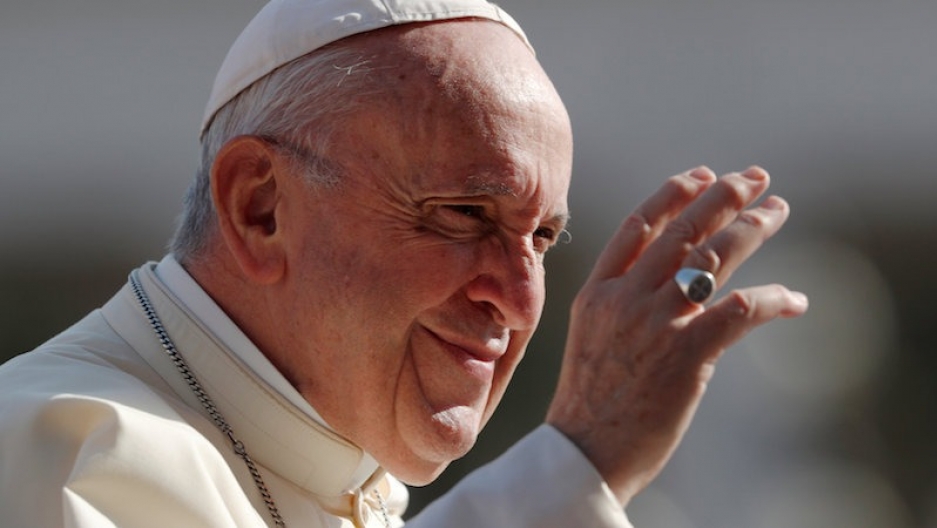 Pope Francis waves as he arrives to lead the Wednesday general audience in Saint Peter's square at the Vatican.

Last March, Archbishop Carlo Maria Vigano dined on the outskirts of Rome at the home of a conservative Italian Catholic journalist. Over pasta, fish and white wine, the prelate poured out his concern for the future of the Roman Catholic Church.

It was the start of about five months of contacts and collaboration between Vigano and several conservative journalists and media outlets that would lead to one of the greatest crises for the Church in modern times.

In a bombshell statement published last weekend when Pope Francis was in Ireland, Vigano, the former Vatican ambassador to Washington, urged Francis to resign on the grounds he knew for years about the sexual misconduct of an American cardinal and did nothing.

The full extent of journalists' involvement in the statement — from conception and editing to translation and publication — emerges from a series of Reuters interviews that reveal a union of conservative clergy and media aimed at what papal defenders say is a campaign to weaken the reformist Francis's pontificate.

Since his election in 2013, conservatives have sharply criticized Francis, saying he has left many faithful confused by pronouncements that the Church should be more welcoming to homosexuals and divorced Catholics and not be obsessed by "culture war" issues such as abortion.

"The conservatives have declared war and they are convinced they can reform the Church with a frontal attack," a senior Vatican prelate said, speaking on the condition of anonymity because "the line is silence" now.

Vigano said he had told the pope of the allegations five years ago, soon after Francis' election. The statement included no supporting documents and also accused a long list of current and past Vatican and US Church officials of facilitating the expansion of a "homosexual network" in the Church.

Pope Francis told reporters on his plane returning from Ireland that he would "not say one word" about the accusations. "Read the document carefully and judge it for yourselves. It speaks for itself," he said.

Vatican sources say it still has not been decided if the Vatican will issue a detailed institutional response to Vigano's accusations, which they say have caused consternation among many members of the faithful.

Vigano's move, an unprecedented attack on the pope by a Vatican insider, was the latest blow to the credibility of the Church.

Two weeks ago, a grand jury in Pennsylvania released the findings of the largest-ever investigation of sex abuse in the US Catholic Church, finding that 301 priests in the state had sexually abused minors over the past 70 years.

The dinner with Vigano in March was held at the home of Aldo Maria Valli, a journalist who covers the Vatican for Italian state television RAI, publishes a conservative blog and has written several books.

Valli writes in his blog that he had several other meetings with Vigano, including a second dinner in Valli's home in August to discuss the topics of the statement.

He says Vigano arrived at their last meeting in a secret location wearing sunglasses and a baseball cap — unusual headgear for an archbishop.

On Aug. 22, Vigano went to the home of Marco Tosatti, a longtime Vatican journalist who writes for conservative publications and runs his own blog that is highly critical of Francis' papacy.

Tosatti said he helped Vigano rewrite and edit the statement during a three-hour meeting. Valli told Reuters Tosatti then sent him and other selected journalists the final version.

Valli told Reuters there is clear division between his work as a television journalist and his personal opinions in his blog and books.

The statement surfaced on Aug. 26, four days after it was dated. Interviews with those involved show its publication was coordinated in consultation with Valli, Tosatti, the National Catholic Register in the United States and Italy's La Verita, both conservative newspapers that criticize Francis regularly.

It was translated into English by Diane Montagna of the conservative LifeSiteNews, which published it at the same time and often carries full texts of speeches by Cardinal Raymond Burke, one of the pope's fiercest critics.

"It's very reminiscent of what is going on in conservative politics in the United States. It's the same playbook," said David Gibson, director of the Center on Religion and Culture at Fordham University in New York. He was alluding to the close relationship between President Donald Trump's administration and conservative-leaning news outlets such as Fox News.

Tosatti told Reuters there was "no conservative conspiracy" behind the statement and that its publication was delayed because it had to be translated in several languages.

He said it was "a mere coincidence" that it was published during the pope's trip to Ireland, where sexual abuse by the clergy was a main issue.

But Valli says in his blog that its release was specifically timed so that it would come up during the pope's in-flight news conference from Dublin to Rome. Experienced Vatican journalists such as Valli and Tosatti understand that the papal plane is a rare chance for reporters to ask the pope questions.

Another journalist who received the statement also confirmed that Vigano, who is now in hiding in an undisclosed location and issues statements through Valli, wanted it published while the pope was in Ireland.

"Obviously Vigano is being used as a weapon by a whole coterie of people who can't stand Pope Francis and the changes he wants to make to the Church," said Alexander Stille, professor of international journalism at Columbia University in New York and author of several books on Italy.

"People who would defend to the death the doctrine of papal infallibility have no difficulty in treating a pope who has been elected by all the standard Vatican protocols as if we were a corporate manager who could be fired from one day to the next."