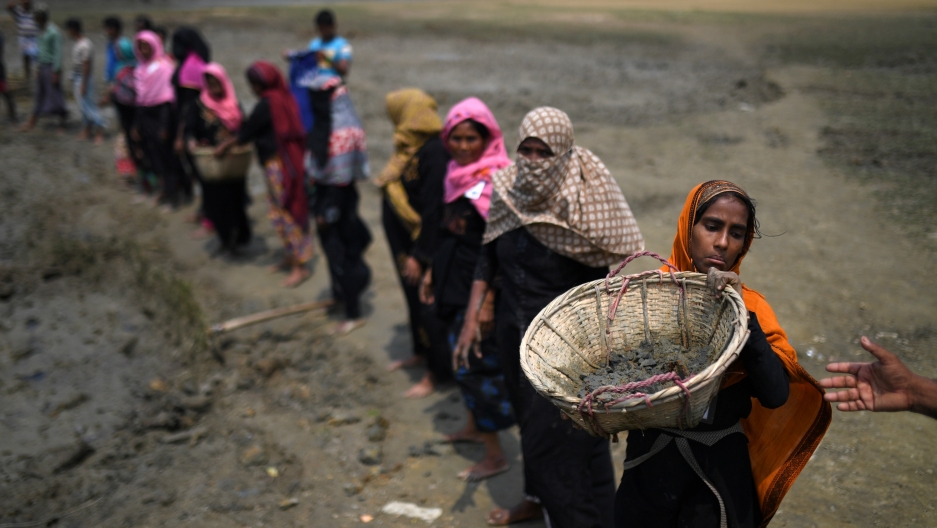 Rohingya refugee women carry baskets of dried out mud from the riverbed to help raise the ground level of the camp in preparation for monsoon season, in Shamlapur refugee camp in Cox's Bazaar, Bangladesh, March 24, 2018.

The humanitarian crisis at Cox's Bazar, Bangladesh, where nearly 1 million Rohingya refugees have fled to, is also a communication crisis. With an array of Southeast Asian languages spoken in the camps, hundreds of thousands of Rohingya are having a tough time talking to aid workers. Even with the assistance of translators, it's hard to sort out all the languages and dialects.

The humanitarian group Translators Without Borders has created a new app to help clear up the miscommunication. Socio-linguist AK Rahim helped design it with input from female Rohingya refugees in the camps.

The World's Marco Werman sat down with Rahim to ask about how the app has been received. According to him, the glossary has been seen as a huge step forward among humanitarians in Cox's Bazar.

Marco Werman: One reason this sort of thing is so important is because women living in the camps don't share a vocabulary for discussing their bodies and issues like sexual exploitation. What have been the kinds of problems they encountered when describing harassment?

AK Rahim: The men and the woman, they developed almost distinct vocabulary sets — different words for even the same thing — especially when it comes to very sensitive topics like sex, gender and sexual harassment, etc. And many women in the camps, when they were trying to tell the story of them being raped or harassed by the Burmese military they were using these euphemisms. They weren't directly saying, "Oh, we've been raped. We've been assaulted."

They were saying "oh we've been stained." And many people couldn't understand it. They were like "what do you mean by 'stained?'"

You have to understand contextually. They would not directly say that they were raped. They're going to say that their reputation or their character has been stained.

And I would guess without a way to describe what actually happened in a particular instance, like rape, it makes it especially difficult to prosecute and help the victim. Right?

And when it comes to issues like family planning, is there a word for "birth control" or "contraception?"

That word is "deepoo" and comes from "Depo Provera," which is an injection or shot that women are given every three months. And that word became the term for contraception, but it comes from a drug name.

Now I gather you workshopped the creation of this glossary app by actually sitting down with refugee women in the camps. Tell us what that was like. Any awkward moments?

When I first went there, they were shocked that a man would be asking these questions. But then they realized that I'm not from the community so they warmed up to me and they started talking very freely. It was very interesting because I had a colleague who is local and they were like, "No, we can't be in the same room." So they were very uncomfortable talking to a man that they probably would see again in the camps or in the city. They were very open to talking to me as an outsider.

They had many things to say and they want it out there. Some of the women, the younger ones, they were more shy. But the older women were very free.

I know the confluence of languages in the camps has also been really hard when the refugees, for example, are sick and finding ways to describe their illnesses. Many came to aid workers saying that their "bodies were falling apart" but that's not exactly what they meant, right?

We, of course, use the word "diarrhea" very freely in the humanitarian world. But the word doesn't necessarily translate throughout these languages. "Gaa-lamani," which means "body falling apart" is how the Rohingya community calls diarrhea. When the Chittagonian interpreters went into the field, they kept hearing "Gaa-lamani" from the Rohingyas and there were many confused health workers out there.

These refugee camps are desperate places but, as you say, it's also a fascinating linguistic ecosystem. So, it's almost like a new language is being created in the camps in real-time.

Yeah it's evolving very rapidly. They're absorbing words from English, of course, but also from Bangla, Chittagonian. And also there is the whole religious influence in the community. Being largely Muslim, they absorb a lot of words from Arabic, Farsi, Urdu.

This is the crossroads of South and Southeast Asia. So, if you look at this region, it's very mountainous. And each mountain or hill has its own unique language. Here you have South Asian languages like Bangla and Chittagonian, and then you have East Asian languages like Rakhine and Burmese kind of blending in this border region.

How's your morale holding up working in Cox's Bazar? Because, as I said, it is a desperate place.

I think I'm in a very unique situation. When I go to do these focus group discussions it's not that I'm just collecting data and collecting words. I'm collecting people's stories. You know, every term has these nuances and they're very personal nuances — from the women particularly. Rape, for me, is just one word but for them it's a whole history, it's a whole history of trauma.