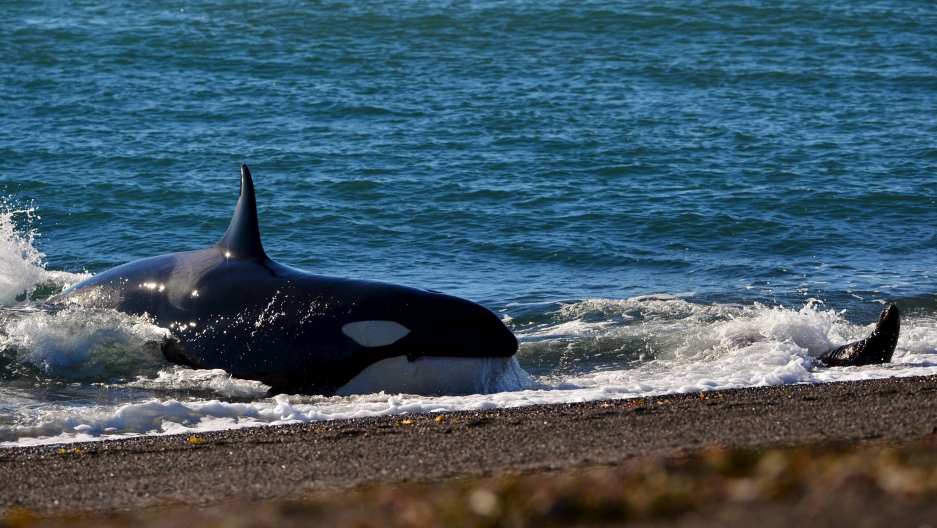 A orca lands on the beach to catch a baby sea lion along the shore of Punta Norte, near the Patagonian village of Puerto Piramides, April 21, 2015.

For many weeks, news of a mother orca carrying her dead infant through the icy waters of the Salish Sea captured the attention of many around the world. Keeping the infant afloat as best she could, the orca, named Tahlequah, also known as J35 by scientists, persisted for 17 days, before finally dropping the dead calf.

This has been one of the most protracted displays of marine mammal grieving.

Among scientists, however, there remains a prejudice against the idea that animals feel “real” grief or respond in complex ways to death. Following reports of the “grieving,” zoologist Jules Howard, for example, wrote, “If you believe J35 was displaying evidence of mourning or grief, you are making a case that rests on faith, not on scientific endeavor.”

As a bioethicist, I’ve been studying the interplay between science and ethics for more than two decades. A growing body of scientific evidence supports the idea that nonhuman animals are aware of death, can experience grief and will sometimes mourn for or ritualize their dead.

You can’t see when you don’t look

Animal grief skeptics are correct about one thing: Scientists don’t know all that much about death-related behaviors, such as grief, in nonhuman animals. Only a few scholars have explored how the multitude of creatures with whom humans share the planet think and feel about death, either their own or others’.

But, I argue, that they don’t know because they haven’t looked.

Scientists haven’t yet turned serious attention to the study of what might be called “comparative thanatology” — the study of death and the practices associated with it. This is perhaps because most humans failed to even entertain the possibility that animals might care about the death of those they love.

Awareness of mortality has remained, for many scientists and philosophers alike, a bastion of human-perceived uniqueness. 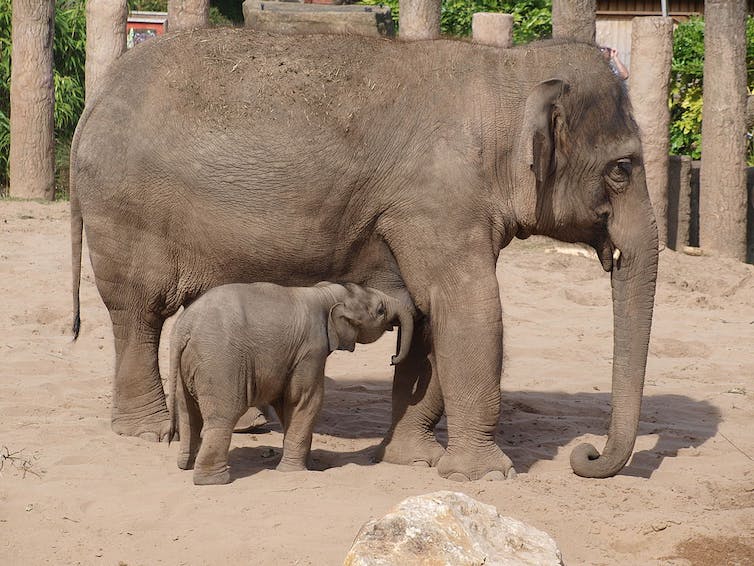 Elephants are known to have strong bonds and mourn for their dead. Credit: Nigel Swales, CC BY-SA

Nevertheless, a growing collection of anecdotal reports of grieving and other death-related behaviors in a wide range of species is helping researchers frame questions about death awareness in animals and figure out how best to study these behaviors.

Elephants, for example, are known to take a great interest in the bones of their deceased and to mourn for dead relatives. One of these vivid ritual explorations of bones was caught on video in 2016 by a doctoral student studying elephants in Africa. Members of three different elephant families came to visit the body of a deceased matriarch, smelling and touching and repeatedly passing by the corpse.

Chimpanzees have also been repeatedly observed engaging in death-related behaviors. In one case, a small group of captive chimpanzees was carefully observed after one of their members, an elderly female named Pansy, died. The chimpanzees checked Pansy’s body for signs of life and cleaned bits of straw from her fur. They refused to go to the place where Pansy had died for several days afterwards.

In another instance, scientists documented a chimpanzee using a tool to clean a corpse. In 2017, a team of primate researchers in Zambia filmed a mother using a piece of dried grass to clean debris from the teeth of her deceased son. The implication, according to the scientists involved, is that chimpanzees continue to feel social bonds, even after death, and feel some sensitivity toward dead bodies.

Magpies have been observed burying their dead under twigs of grass. Ethologist Marc Bekoff, who observed this behavior, described it as a “magpie funeral.”

In one of the most fascinating recent examples, an 8-year-old boy caught video footage of peccaries, a species of wild pig-like animal found in parts of the US, responding to a dead herd-mate. The peccaries visited the dead body repeatedly, nuzzling it and biting at it, as well as sleeping next to it.

Crows have been seen forming what scientists call “cacophonous aggregations” — mobbing and squawking in a big group — in response to another dead crow.

These are just a few of the many examples.

Some scientists insist that behaviors such of these shouldn’t be labeled with human terms such as “grief” and “mourning” because it isn’t rigorous science. Science can observe a given behavior, but it is very difficult to know what feeling has motivated that behavior. A 2011 study published in Science that found evidence of empathy in rats and mice was met with a similar kind of skepticism.

It’s about how animals grieve

I agree that a large degree of caution is appropriate when it comes to ascribing emotions and behaviors such as grief to animals. But not because there is any doubt that animals feel or grieve, or that a mother’s anguish over the loss of her child is any less painful.

Jessica Pierce is a professor of bioethics at the University of Colorado Denver.