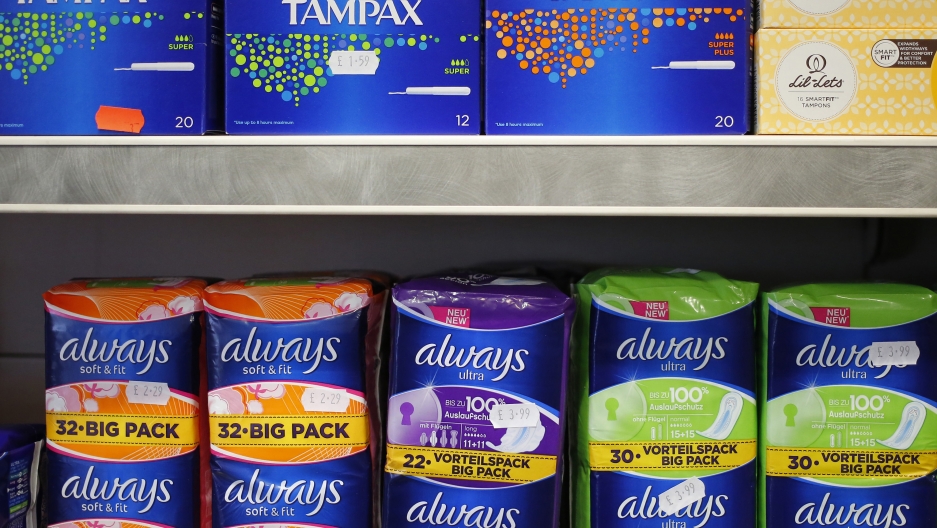 Feminine hygiene products are seen in a pharmacy in London, Britain, March 18, 2016. Scotland became the first country in the world to give out free sanitary napkins to students this past Friday.

Scotland became the first country in the world to give out free sanitary napkins to students this past Friday.

Victoria Heaney, who led the charge to provide free sanitary napkins, conducted a survey on period poverty last year for Women for Independence, a grassroots group in Scotland. She found that nearly one in five respondents had difficulty affording period products each month.

Through her findings, Heaney started the #FreePeriodScotland campaign that caught the attention of the Scottish government and, ultimately, helped spur a conversation across Scotland about the fight against period poverty.

Heaney spoke with The World's Marco Werman about why this is such an important issue to address.

Marco Werman: I know your research on period poverty through the Women for Independence network is being credited with putting pressure on the Scottish government to do something about this. Tell us what your research actually found.

Victoria Heaney: The special thing about the research is that it's groundbreaking. It's never been done before. So we decided to do a little bit of digging, ask some questions and before we knew it we had the biggest evidence-based research in regard to this topic. So it's been pretty phenomenal.

What did the research show? How bad is the problem for girls who menstruate during the school year?

We found that a lot of people who couldn't afford period products had to say, "You know, I can't attend school." We also found as well that sometimes the problem wasn't actually the money. Sometimes the problem actually came in the shame of asking someone. That depends on how your relationship with your family was and how comfortable you are as a women talking about your body and talking about having a visible period in public, too. And the one thing that research pointed to was that women who had trouble accessing period products because they couldn't afford them — the biggest and most common experience was stigma and shame. This was women feeling ashamed, feeling dirty, feeling unhygienic and not actually feeling like they can access everything in society when they are on their period.

So walk us through what this will look like at schools, colleges and universities. How will students have access to these products when they get their period?

The research has indicated that over 22 percent of the people that took part in the survey have actually missed school, they've missed work, they've missed appointments. So hopefully this prevention is now going to start enabling students — but without the stigma or the shame of having to ask someone. So these will be dispensed, will be freely available and you won't have to, you know, if you're in your 70s, ask the nurse for a for a tampon or for a pad.

When I first heard about the story I was kind of surprised that it was happening in Scotland, a fairly wealthy country.

I mean, I covered an almost identical story in a slum in Nairobi, Kenya. Girls who could not afford sanitary pads and tampons ended up missing school — sometimes actually having to drop out because of something as banal as their period. Personally for you, what was your own awareness of the problem in Scotland? And were you surprised to hear how consequential things can be for a schoolgirl during menstruation?

What we've all found is that there's a dangerous myth that access to period products only affect certain countries or certain demographics or countries with a certain economic type of output. But I think what we have seen is that most Western countries are experiencing — experiencing cutbacks when it comes to social provision, too. There is this myth that these situations don't happen on our doorstep, but that actually happen to the women down the street as well.

So in Scotland what work still needs to be done?

I think right now we need to celebrate our success — we need to celebrate that our country has become a world leader and we also need to celebrate the fact that we have people in every walk of society who are listening to these organizations and listening to campaigners. But pushing forward, there's lots more we need to do in terms of education. Biological education has to match up with how a woman sees her place in the world and how society views and treats women, too. So I think we've got a lot of more realization to do when it comes to how we talk about periods, how we act around them and how we talk to boys and men about them too. We all need to be educated on the same level about this.