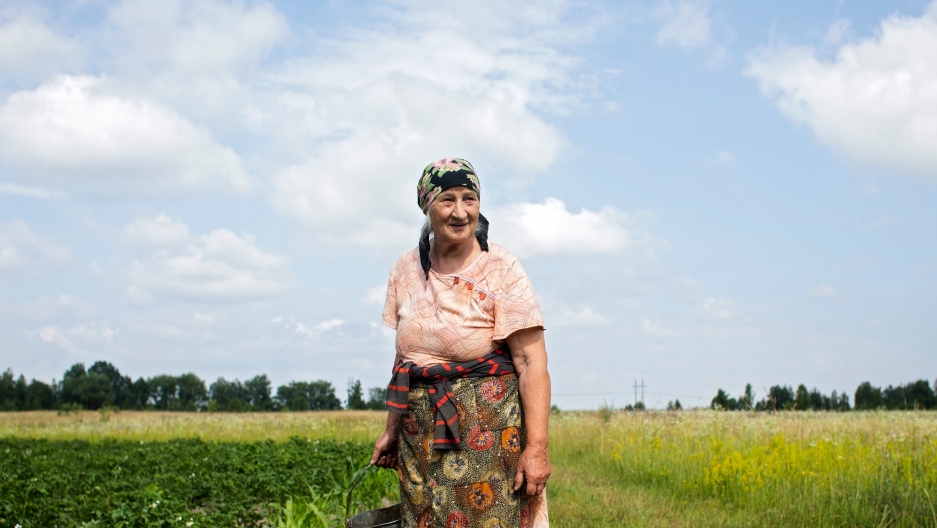 Nina, who lives near the Chernobyl disaster site, monitors her potato field in the almost non-existent village of Karpylivak.

Nina is worried about her potato field.

She’s standing in the middle of a two-lane road in the village of Karpylivka, Ukraine, showing me the bugs she’s just pulled off her plants in the field nearby. The insects squirm inside a small, tin bucket.

“I have no money for the pesticides so I just pull them out by hand,” Nina says in Ukrainian through a translator. Nina declined to give her surname for this story.
Karpylivka is about 70 miles — less than a two-hour drive — from downtown Kiev. It’s breathtakingly beautiful. There are forests, small roadside churches, fields of flowers and streams that snake through this bucolic eastern European landscape. You would never know that this village is less than 30 miles, about a 45-minute drive, from the epicenter of one of the worst nuclear accidents in history — Chernobyl.

“Chernobyl was a beautiful place,” she says. “I don’t know why they put this disaster there.”

In April 1986, Chernobyl’s reactor 4 exploded as scientists were conducting an experiment at the plant. The explosion sent clouds of radiation particles across Europe. Almost 100 villages in Ukraine were evacuated as hundreds of thousands of soldiers from the across the former Soviet Union, including Belarus and Ukraine, were sent in to clean up and contain the damage.

Now, 32 years later with $700 billion spent, Ukraine is still cleaning up. The country has created a 1,000-square-mile “exclusion zone” around the disaster that prohibits people from living there. Scientists take samples of the soil, wood and vegetation inside the zone to monitor radiation levels. 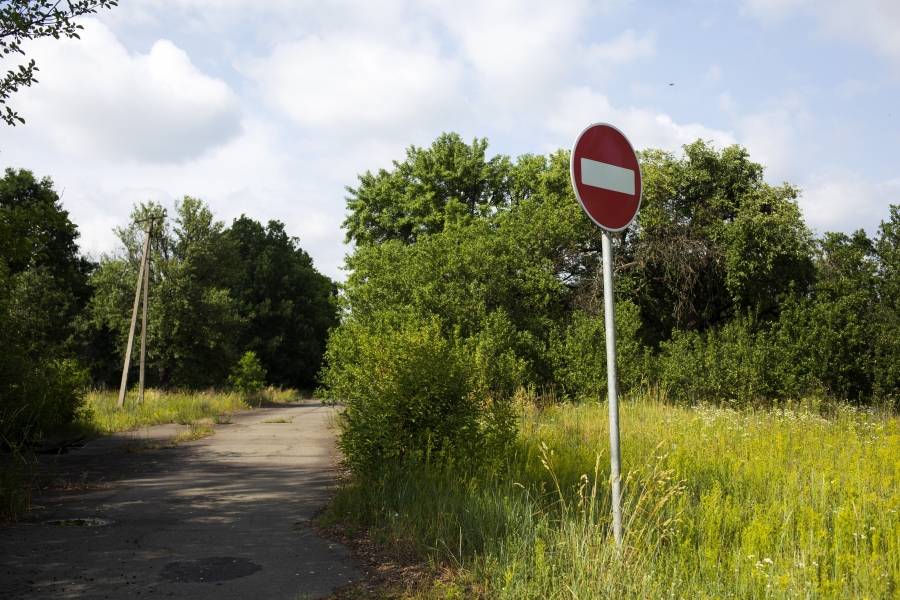 A sign in the nearly abandoned village of Karpylivka warns people not to go any further. Up ahead is a checkpoint before entering the Chernobyl exclusion zone.

Nina’s potato field isn’t in the zone, but for a while, scientists also monitored the soil in her village. Sometimes the levels were just as bad as those in the zone.

Why? Because the soldiers sent to clean up after the disaster stayed in her village.

Almost 80 miles away from Nina is a block of Soviet-style buildings on the outskirts of central Kiev. It’s here that scientists Valery Kashparov and Valentin Protsyk work for the Ukrainian Institute of Agricultural Radiology (UIAR). They’re the people who monitor the soil, wood, plants and animals inside and outside the exclusion zone.

In the first years after the disaster, the focus was the cleanup. Around 800,000 soldiers, firefighters, miners and engineers — collectively known as “liquidators” — were tasked with cleaning up the radiation. In 1991, they were able to “stabilize” the areas surrounding the plant. That’s when they implemented the exclusion zone, which includes the northernmost portions of Kiev and Zhytomyr oblasts. Cities closest to the plant will never be inhabitable — like the city of Pripyat, which once had a population of nearly 50,000.

At the radiation institute, down a long, dark hallway, are rooms where bags full of soil, wood and grass lay on the floor. These samples were taken from within the exclusion zone and are waiting to be tested for radiation levels. As Kashparov explains, it’s not the external radiation they worry about, these days — but rather what gets consumed. Stuff like iodine and cesium, which has a long half life. How do they get in the body? By drinking milk, for example.

“Because of the settlement, we had very low level density of contamination with cesium, but very high transfer of cesium from soil to grass from the root — and from grass to the animals as milk. And people use this milk and obtain the internal radiation after it,” explains Kasparov.

The UIAR monitors the things people eat, like Nina’s potato field and the mushrooms that grow nearby. Outside the lab where Protsyk and his assistants conduct their tests is a map identifying the places they monitor. One of those places is the Invankiv region, where Nina’s village is.

Nina’s potato field isn’t in the exclusion zone, but scientists do monitor the soil in her village. In certain places, called hospots, the levels are just as bad as areas inside the zone.
When the liquidators stayed in her village, they tracked radiation from the plant on their boots and trucks. Protsyk and his team started noticing these hotspots and they’ve been studying them to see how dangerous they are. 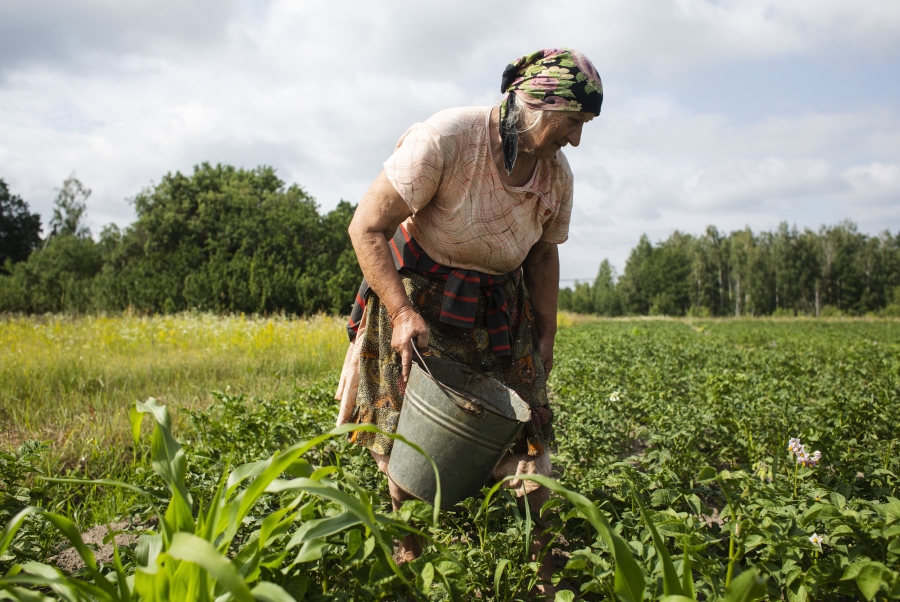 Nina tends to her potato field. Debris carried by soldiers who cleaned up after the Chernobyl disaster created a radiation "hotspot" in Nina's village.

The village of Karpylivka is one of those hotspots, but Nina doesn’t know this because she hasn’t seen the map. She says scientists used to come and test her soil, but she hasn’t seen them in a while. Nina and the other villagers didn’t even know about the Chernobyl nuclear accident until a few weeks after it happened.

“The first year, nothing really happened. Everyone thought we would be evacuated as well,” explained Nina as she wipes her hands on her apron.

“But then they left this village alone. We are part of Ivankiv County, and they were worried there would be a rebellion in Ivankiv [the main city in the county] if people were to be evacuated, so they decided to leave the villages of Pisky and Karpylivka alone as well.”

So she never left.

It’s unclear how many people used to live in Karpylivka, which consists of a few remaining clapboard houses and open fields. Some homes have been taken over by vegetation. There are no shops. Nina says there is no transportation to take them to nearby towns so they can buy food or other supplies. She and her few remaining neighbors forage for what they can.

The day I met Nina, a woman named Maria approached us with a handful of berries she had just picked. Maria lives in Kiev, but drives here to check on her mom.

“They’re from the zone,” she explains in Ukrainian through our translator. The zone, meaning the exclusion zone, which starts about a mile away from Nina’s potato field. There is a fence that guards the perimeter of the zone, along with some police officers, but Maria and others found a hole in the fence they use to find food. 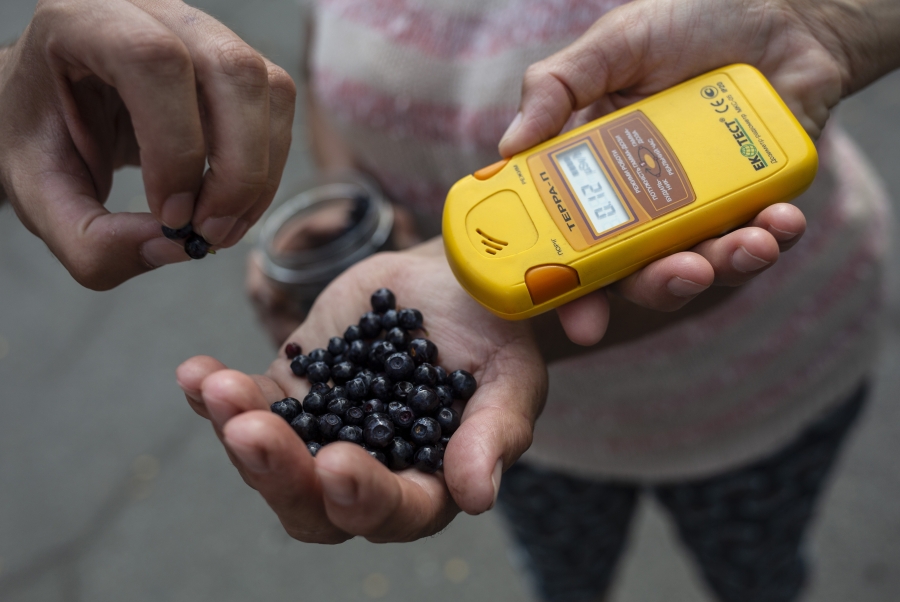 People forage for food in Nina's village. A woman who's come to visit her mother picked berries from inside the exclusion zone. The berries are being measured with a geiger counter.

Nina says she got sick after the Chernobyl accident — a bad headache and vomiting, which are signs of radiation sickness. But after a while she felt fine and returned to Karpylivka. She lives off a small pension with her adult son.

Right now, the exclusion zone is the same as it’s been for the last 30 years and the Ukrainian government doesn’t plan on changing it. The monitoring continues. Protsyk says his study of the hotspots where soldiers stayed, like Nina’s village, will be complete next year.

“Our contribution to these people is that we can find these places of pollution and we are planning to destroy [the polluted places] so that [they] don’t bring harm to them,” explained Protsyk, as he pointed at the map of hotspots. He says when his team's report is done it will be the government’s job to decide what to do, such as whether to evacuate Karpylivka.

Currently, the UIAR doesn’t think Nina and the other villagers are in danger.

None of this seems to faze Nina, who says she doesn’t plan to move. She grew up here and plans to die here. She says she could have moved to a larger city, farther away from the Chernobyl accident. But she says the people who were exposed to radiation and left the village still died — and they died homesick as well.

“When they evacuated and relocated those villages, I visited some of those relatives. They were crying so much, they wanted to return home so much. They told me that if they would let them return they would fly there on their wings [to return there instantly],” said Nina.  “Even more of them died over there, but we are so fortunate, thank God! People are falling, falling [dying here as well]. I do not want to go anywhere. I would rather die here, because it will not be good anywhere else at this age. I do not have the health for it.”