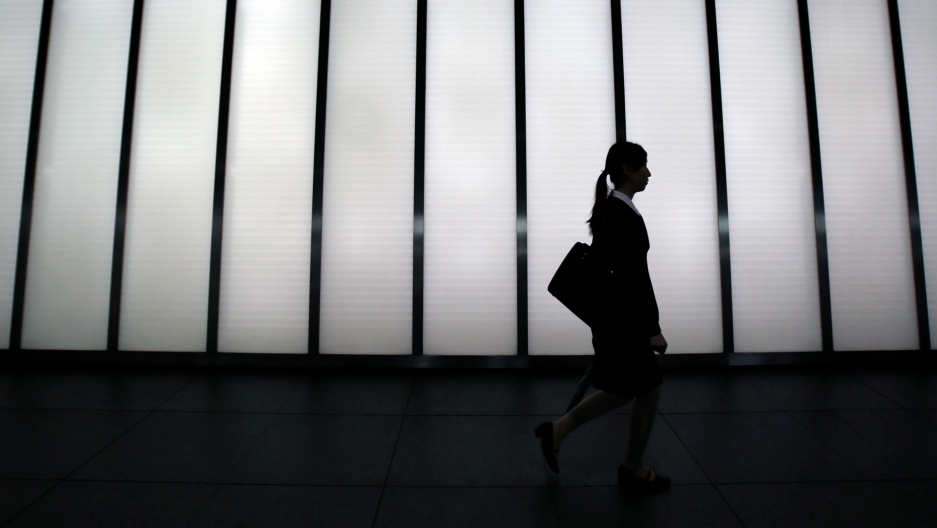 A job seeker walks past a corridor of a commercial building in Tokyo in this 2014 file photos. More women are joining the Japanese workforce but are struggling with the expectation that they will work long hours while also bearing greater childcare responsibilities than their husbands.

Kumi Matsumoto has a problem. She has a full-time job. But she’s Japanese and working full-time in Japan can mean something different than in other places, like the US.

Matsumoto works at the Ministry of Foreign Affairs in Tokyo. That’s where she is this morning, seated at a small table in a cafeteria. It’s just before 10 a.m. and workers are swiping their ID cards to enter the glass building. Matsumoto loves her job, but she already has another full-time gig – her two small children.

And being a business warrior and a parent “is very, very challenging problem,” Matsumoto says.

In Japan, long working hours is a serious issue for both women and men. This is a country where karōshi, or death by overwork, is regularly reported in the news. But women are still expected to do most of the child care.

(Editor’s note: The reporter first met Matsumoto while reporting a story for Marketplace about working mothers.)

Then on maternity leave with her second baby, Matsumoto said it was exhausting to be a working mom.

“It’s very normal for us to stay until midnight,” she told Marketplace at the time. “And sometimes we have to stay til early in the morning, next day.”

Matsumoto, who’s 43, says she can juggle her kids and work because her husband and her in-laws help. But that kind of support can be rare here. And even with the help, Matsumoto says, it can be hard to manage, especially with two kids.

When members of Japan’s legislature have to appear to answer questions, which happens a lot, they’re often given those questions ahead of time. Part of Matsumoto’s job is writing the answers. But most of the time she says she and her co-workers don’t know which team will get the assignment, so they all have to wait.

But things are starting to change. Slowly.

Only 3.7 percent of executives at publicly traded companies in Japan are female. The country's goal to have 30 percent of leadership positions across society held by women by 2020. Japan’s Gender Equality Bureau, which publishes an annual report on the topic, says progress is being made. For years, only about 40 percent of women returned to work after giving birth to their first child. Now, that figure has increased to 53 percent.

This year’s report has a glossy cover. Red and sprinkled with white and gold flowers and butterflies. And if you turn to page 29 you’ll see this recommendation: “Address long working hours.”

All companies and government agencies with more than 300 employees are now required to come up with an “action plan” to increase women’s participation at work and to cut down on those long hours. Matsumoto says her office finally has a new policy. If it seems unlikely you will have to work late, you can just go home — as long as you keep checking your smartphone. But Matsumoto says not many of her colleagues took advantage of the new policy.

But her colleagues said they were working late anyway, so they didn’t need the smartphone alert.

So Matsumoto has a big choice to make. In Japan, many employers ask their workers to choose between two career paths — management or “mommy” track — an option with less responsibility and potential for advancement.

“The struggle is that whether or not I should just go easy way,” Matsumoto says. “Or go hard way to change the society.”

The easy way, says Matsumoto, would be the mommy track.

"I remember about 10 years ago when I was working in Tokyo," shes says. "There was only one mommy in in in the whole division. And she was always, always saying sorry. ‘I'm sorry, I'm sorry, I have to go home.’ And it was very sad to see that kind of thing.”

But now there are more working mothers in Japan and they’re apologizing less. And while that atmosphere represents a big change, Matsumoto says it’s not enough.

Japan’s problems are all tangled up, says Mitsuki Horiuchi of the Kitakyushu Forum on Asian Women, an NGO focused on the advancement of women.

Until things get easier for women in the workplace, many will continue not to have babies. And without more babies Japan’s workforce will continue to shrink.

“We have to change two things,” Horiuchi says. “One, the working style. People have to take holidays. Have to enjoy the family life.”

If not, says Horiuchi, the country will face more problems. Because while the workforce is shrinking, one part of Japan’s population is growing — the elderly.

“And then the question is not just only childcare, but aging care,” she says.

Japan is running out of people to care for its aging population. That means the problems that working mothers face are increasingly affecting everyone. Horiuchi says the government is making an effort to address the imbalances, like a new law passed in May calling for political parties to have equal numbers of male and female candidates. But the law doesn't have any teeth, Horiuchi says.

“The law only is only encouraged. Not obligation, for the political party.”

Only about 10 percent of Japan’s parliament is made up of women. That means it ranks lower than 150 other countries — including Afghanistan, Saudi Arabia and the US. But Horiuchi says it’s not just the government. Companies also need to take responsibility to hire and promote more women.

Still, Horiuchi, 74, says the status of women is changing.

“This used to be that women — if my age, if we don't marry and then everybody asking you why?” she says. “Women should marry. Your parents very much worried about you. Why you’re single? Because  women that maybe happiness should be marriage or something, but nowadays no one really push you to marry.”

Last night Matsumoto stayed in the office til 8 p.m., but tonight she has to leave earlier.

It can be hard to leave early, Matsumoto says, when everyone else is staying late.

“It's just a group mind. I think that when everybody's working hard, it takes courage to go home early. That's one thing,” she says. “But I'm a very vocal type of person that I'm the kind of who can just tell everybody I have to go home at 5:30. A lot of working mothers are not that vocal.”

Those mothers, she says, are having a hard time adjusting. But Matsumoto is quick to point out that making a big life shift doesn’t only affect moms. It also affects working fathers. When working dads, used to staying at the office as late as midnight, leave hours earlier it can cause problems at home.

“Some working fathers try really hard to go home around like 8:30,” she says. “But then their wives said 8:30 is a time their baby sleep. And then you come about the time the baby is about to fall asleep they actually bother the baby. I heard some wives ask them, ‘If you do not come back early enough, then please stay late enough so as not to bother the baby.’”

Everyone will need to shift, says Matsumoto.

“We always say that in order for women to work in workplace, the man has to change and the whole society has to change,” Matsumoto says. “It's not just for mommies, it's also for single women or a couple without children who are trying to have a baby.”

A few years ago, Matsumoto founded a support group for mothers and fathers at her office. At first that’s who came to meetings — moms and dads. But now, even workers without kids are coming because they want to figure out how to find the time to have kids one day too.

This story was reported with support from the Foreign Press Center Japan.