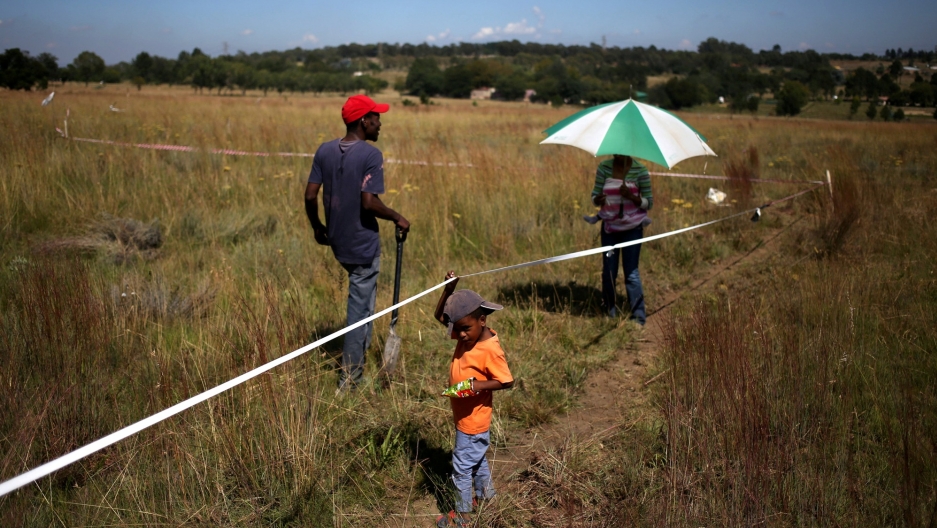 A couple and their child are seen on vacant land marked with tape in Olievenhoutbosch near Centurion, South Africa.

South Africa, a country that remains deeply racially divided, on Wednesday accused US President Donald Trump of stoking racial divisions in the country after the president said he had asked Secretary of State Mike Pompeo to study South African "land and farm seizures" and the "killing of farmers."

"I have asked Secretary of State @SecPompeo to closely study the South Africa land and farm seizures and expropriations and large scale killing of farmers," Trump said on Twitter.

The tweet appeared to be a response to a Fox News report on Wednesday that focused on South Africa's land issue and murders of white farmers.

South African President Cyril Ramaphosa's spokeswoman said Trump was "misinformed" and the foreign ministry would seek clarification from the US Embassy in Pretoria.

"South Africa totally rejects this narrow perception which only seeks to divide our nation and reminds us of our colonial past," a tweet from South Africa's official government account said.

Ramaphosa announced on Aug. 1 that the ruling African National Congress (ANC) plans to change the constitution to allow the expropriation of land without compensation, as whites still own most of South Africa's territory.

Ramaphosa has said any measures would not hit economic growth or food security. No land has been "seized" since the reform plans were announced, the ANC says.

"It is regrettable that the tweet is based on false information," South Africa's foreign affairs minister, Lindiwe Sisulu, said.

Far-left opposition firebrand, Julius Malema, who has led calls for the seizure of white-owned land, told Trump to keep out of the debate. "We want to send a strong message to the US to stay out of South Africa. You have caused enough problems in Africa," he told journalists.

The US State Department was not immediately available for comment.

"Everyone in South Africa should therefore hope that the pressure from the USA will lead to the ANC reconsidering the disastrous route that they want to take SA on," AfriForum's CEO, Kallie Kriel, said.

He  added that Trump's comment came just three months after the organization sent a delegation to the United States to brief Fox News presenter Tucker Carlson, and the Cato Institute think tank, on the situation in South Africa.

Violent crime is a serious problem across South Africa and 47 farmers were killed in 2017-18, according to statistics from AgriSA, an association of agricultural associations. However the same figures show that farm murders are at a 20-year low.

Since the end of apartheid in 1994, the ANC has followed a "willing-seller, willing-buyer" model under which the government buys white-owned farms for redistribution to blacks.

Progress has been slow and most South Africans believe something has to be done to accelerate change, providing it does not hurt the economy or stoke unrest.

"That there will be instability and worries about property rights is inevitable, but we don't expect that the government will act in a way that radically destabilizes investor security."

Trump's tweet came days after it was announced that his wife, Melania, would travel to Africa in October for her first major solo international trip as first lady.

In January, South Africa protested to the US Embassy in Pretoria about reported remarks by Trump that some immigrants from Africa and Haiti came from "shithole" countries.