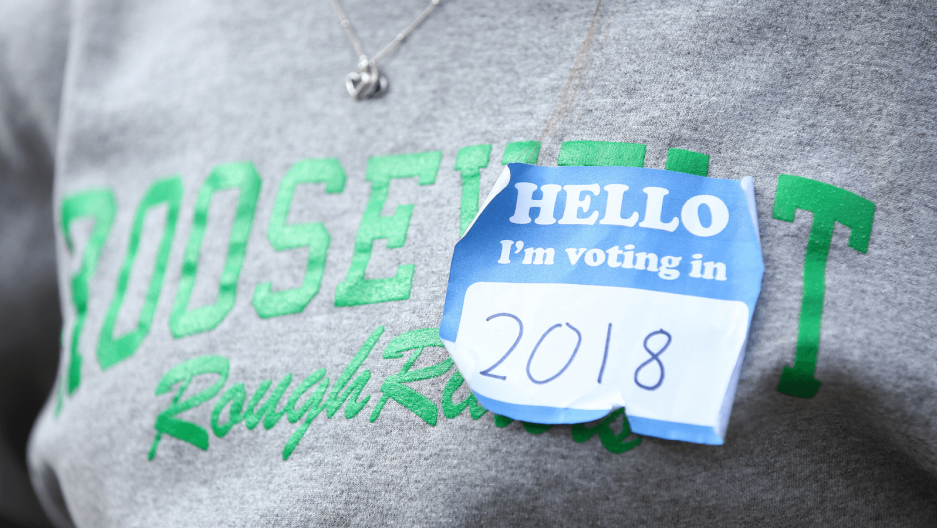 A Roosevelt High School student wears a sticker saying she'll be able to vote this year at the University of Washington in Seattle, Washington, March 14, 2018.

BlackPAC — an upstart super PAC that’s raised millions to support Democrats — has received a new infusion of “dark money” to fuel its 2018 midterm election efforts, according to new federal filings.

While BlackPAC has been outspoken about fighting racial injustice, battling “unchecked power” and “working to end the corrupt campaign finance system that benefits corporations over citizens,” the Center for Public Integrity earlier this year reported that the majority of BlackPAC’s funds came mostly from super PACs and dark money nonprofits.

BlackPAC officials declined to comment on the contribution from Propel Capital Network LLC, which is leading an effort this year to support various liberal organizations.

Adrianne Shropshire, BlackPAC’s executive director, earlier this year told the Center for Public Integrity that her organization is committed to year-round voter engagement and those efforts take money.

Related: A liberal super PAC is raising millions to mobilize black voters. Does it matter that its bankrollers are white?

“They’re supporting our agenda — not the other way around,” Shropshire said of BlackPAC donors. “Our agendas often align, but we are always very clear about who we are accountable to — black communities — and what we stand for — fixing our rigged economic system and its predatory relationship to communities of color, ending the strategy of mass incarceration, protecting voting rights and creating a more equitable education system; we welcome donors who share these values.”

Related: There are many rich minorities. So why are there no black Koch brothers?

This year, BlackPAC continues to energize black voters across the country while shoveling huge amounts of money in the process.

In May, BlackPAC spent more than $933,000 in Georgia’s Democratic gubernatorial primary supporting Stacey Abrams, according to federal campaign finance records. Abrams won her primary, and if she wins November’s general election, she will be the first African American female governor in US history.

What is ‘dark money’?

Political “dark money” cannot, by definition, be traced to a single person.

“Dark money” groups, which may include political nonprofits, trade associations and labor unions, are not required by law to disclose their donors. Such secret cash generally supports Republican candidates more than Democratic candidates, but of late, Democratic groups have shown a greater willingness to trade in it despite many liberals’ call for stricter campaign finance regulations.

Robert Maguire, a political nonprofits investigator at the nonpartisan Center for Responsive Politics, said LLCs are even more of a “black hole than what we traditionally refer to as dark money.”

“These are entities with almost no paper trail. They provide anonymous donors with even more cover when they're trying to influence politics or policy without any public fingerprints,” Maguire said.

Political nonprofit groups are required by law to file paperwork with the Internal Revenue Service, where some financial information and organizational leadership is reported. LLCs don’t have that same requirement, meaning information about leadership and operation is very limited.

Maguire said Delaware, where Propel Capital Network LLC is registered, is the “go-to” state for anyone looking to form an entity with minimum disclosure. “You have no window into the operating of the organization,” he said.

BlackPAC isn’t the only progressive, minority-focused group to which Propel Capital Network LLC has given “dark money.”

In November, the LLC gave $75,000 to Color of Change PAC, a Democrat-backing political committee that focuses on mobilizing black voters and electing liberal candidates.

Spokespeople for Color of Change PAC and Sister District Project did not immediately respond to inquiries.

Propel Capital Network LLC is part of an expansion by Propel Capital, a New York City-based operation that says it formed in 2008 as a “donor-advised fund” to address inequality.

Propel Capital co-founder and CEO Sarah Williams, along with fellow co-founder Jeremy Mindich, as well as other Propel Capital staff, did not respond to the Center for Public Integrity’s requests for comment.

Williams previously told Philanthropy News Digest that technology and volunteers hungry for change will help local organizations “be the driving force behind major progressive rebound in 2018 and beyond.”

Campaign finance reformers, who typically skew to the left of the political spectrum, assert that dark money gives a small, wealthy pool of the population power to control election outcomes and political agendas, leaving ordinary citizens in the cold.

“Dark money” spending in elections has exploded since the 2010 Citizens United v. Federal Election Commission decision, in which the Supreme Court ruled that corporations, political nonprofits, labor unions and trade associations could spend unlimited amounts of money in elections.