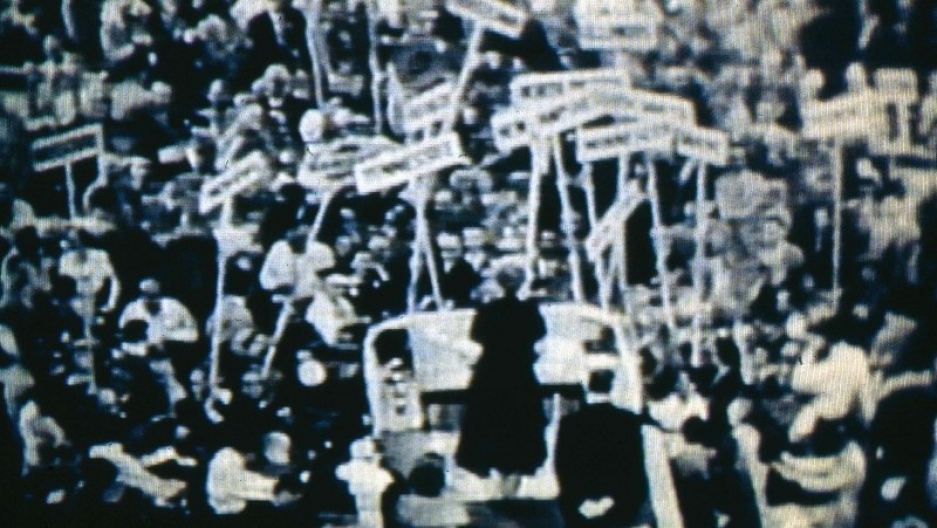 A woman addresses a crowd of delegates at the 1968 Democratic National Convention in Chicago. Before things turned ugly, an air of surreal farce surrounded the build-up as delegates checked into the Conrad Hilton Hotel near the International Amphitheatre convention venue. Protesters embraced left field tactics such as holding a counter convention offering the likes of a nude grope-in for peace and prosperity, and workshops on joint rolling, guerrilla theater and draft dodging. They propagated rumors that they were going to inject LSD into the city’s drinking water, and send out “stud teams” to seduce the wives and daughters of the delegates. The atmosphere for those attending the convention was unsettling to say the least, while the police and city authorities were itching to teach the dissenters a lesson for making Chicago look bad.

The Democratic National Convention of 1968 began in Chicago on August 26 and quickly turned into an acrimonious cacophony of heated arguments and scuffles on the convention floor over the Vietnam War and who should become the party’s presidential nomination.

Outside on the streets and around the city, the mood was even worse.

The week before the convention began, anti-war protesters ranging from New Left radicals to long-haired hippies and anarchists started coming into the city, determined to change the party’s policy toward the increasingly hated Vietnam War.

Amid an atmosphere of severe apprehension, the city’s authorities responded by mobilizing 12,000 police officers — the city’s entire force — supported by 6,000 armed National Guardsmen, with another 6,000 US Army troops on standby.

“It was a city under siege, like the sort of thing you would find in a Third World city,” says Stephen Shames, who attended the convention both as a journalist for the underground press and as a protester. “You have to remember it followed the assassinations of Martin Luther King and Robert Kennedy, and riots in major cities — people were really angry.”

Richard Daly, the city’s tough-talking, no-nonsense mayor, imposed an 11 p.m. curfew, but the protesters, many of whom were encamped in the city’s parks, weren’t having any of it. Each night they defied the curfew, continuing to shout obscenities about President Lyndon Johnson and chanting “Hey, hey, LBJ! How many kids have you killed today!”

The police, backed by Daley who had no patience for such dissent, needed little excuse, responding with tear gas and wading into the crowds with truncheons as their mostly young quarry turned and fled or stood their ground while throwing stones and shouting profanities.

The worst confrontation occurred when protesters from various locations decided to march on the convention hall and Conrad Hilton hotel. They converged on Michigan Avenue and Balbo Drive where they were halted by a line of police. As protesters began chanting “The whole world is watching!” the police fired gas into the crowd, then charged and started to club whoever was closest, protesters and journalists alike.

What was later declared a “police riot” was beamed by television cameras into the convention hall itself and millions of American homes. By the time the conference ended on August 29 with the Democrats nominating Hubert Humphrey, the Democratic Party’s reputation lay in shreds.

Richard Nixon, the Republican Party’s presidential nomination, won the election later that year, setting off a major realignment in American politics — he won again in the 1972 election by a landslide, as the Democrat’s dream of a Great Society in which poverty and racial injustice were eliminated receded.

For those who were there and are now looking back after 50 years, the convention and events in Chicago were the culmination of an unprecedented year that fundamentally changed the American psyche and the nature of its politics.

“It was a year when the sensitivities and nerve ends of millions of American were assaulted almost beyond bearing, and the hopes of other millions were buried beneath a wave of violence, deception and collective trauma,” Jules Witcover, a journalist at the time, recalls in an online exhibition on the events of 1968 by the Dolph Briscoe Center for American History in Austin, Texas, which houses Witcover’s archives.

“Something vital died: The post-World War II dream of an America that at last would face up to its most basic problems at home and abroad with wisdom, honesty and compassion.” 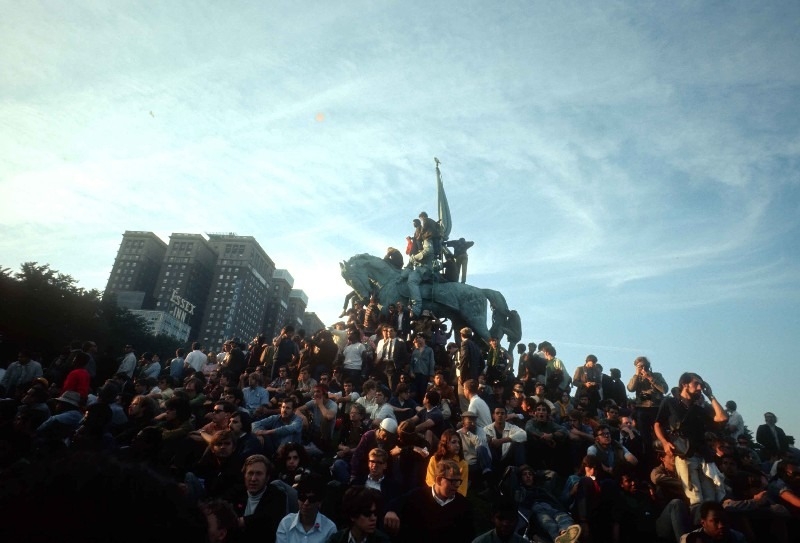 A demonstration in Grant Park, which along with Lincoln Park became one of the hubs of demonstrations and clashes with police. “These protesters regarded the police as pigs, who in turn regarded them as draft-dodging hippies,” says photojournalist Dennis Brack who covered the convention. At one point a crowd of 15,000 persons had moved into Grant Park for a rally. Police were tensely lined up along the rally’s perimeter. Suddenly a shirtless, long-haired man began to lower an American flag, recalls Jules Witcover, a journalist at the time who wrote the book "The Year the Dream Died: Revisiting 1968 in America." “Something immediately snapped among the police,” Witcover says. “They charged into the crowd, swinging their billy clubs with abandon. Demonstrators were seized by police, clubbed to the ground and thrown into awaiting paddy wagons.” 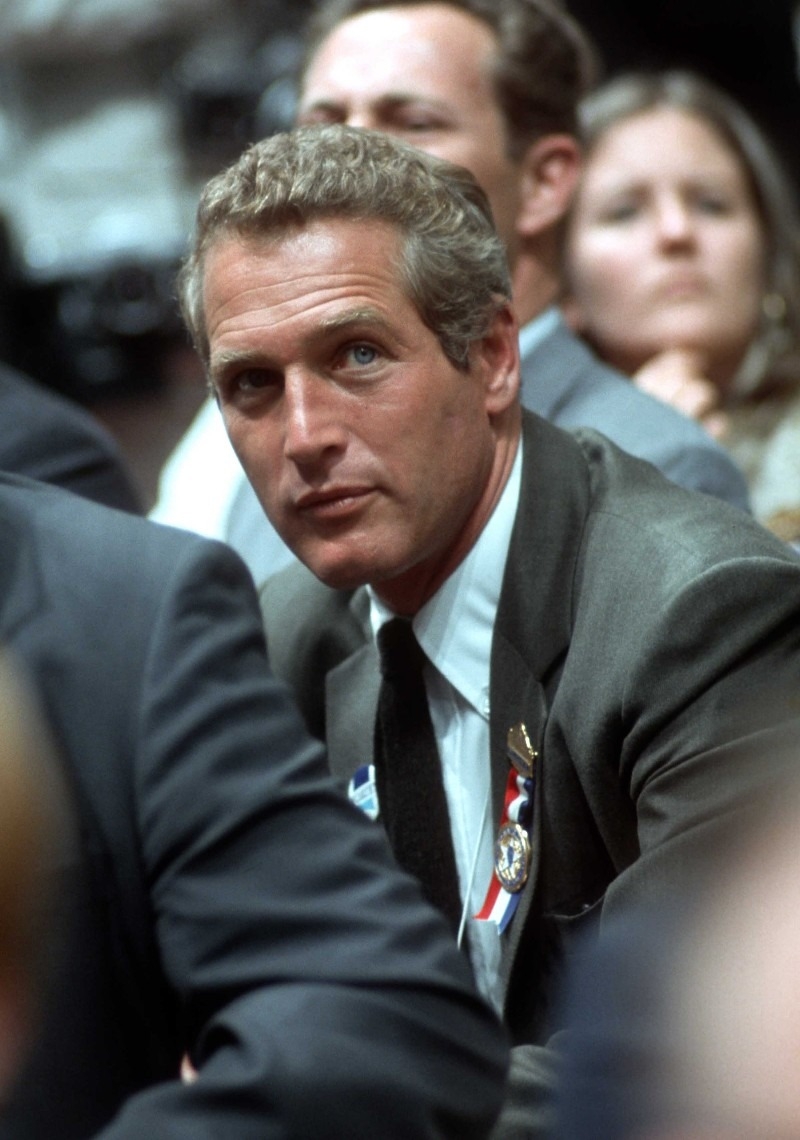 On the convention floor chants of “Stop the War!” started in the New York and California delegations before spreading to other delegations and into the galleries, eventually having to be gaveled to an end. At one point, Dan Rather, a well-known journalist covering the convention for CBS Television, was assaulted on the convention floor by security personnel as he attempted to interview a delegate. “Take your hands off me unless you plan to arrest me,” Rather shouted. “I think we’ve got a bunch of thugs here, Dan,” Walter Cronkite, a CBS colleague with Rather, remarked on air. The dysfunction meant that everything ran over schedule. “It was midnight and people had expected to be back at their hotels, but the votes still hadn’t happened,” recalls Dennis Brack, a photojournalist covering the convention. “All the delegates and people there were bored to death. You can see it in my photo of the actor Paul Newman.” 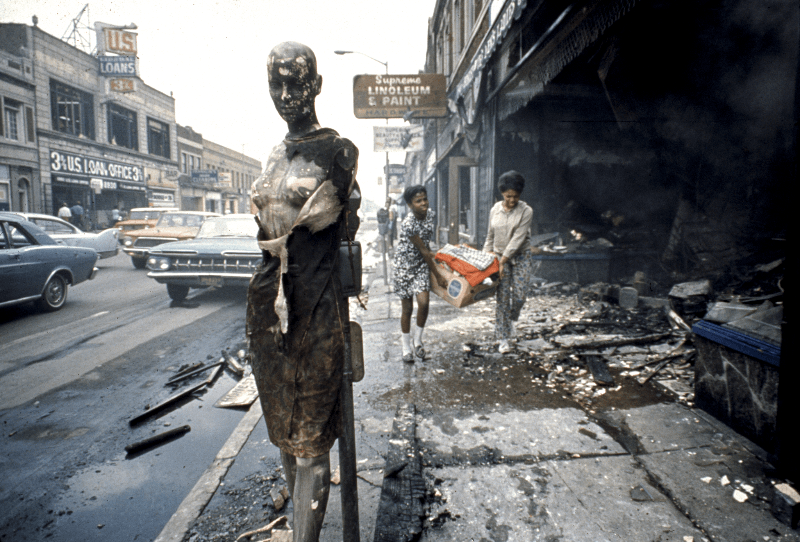 A burned storefront and mannequin in Detroit, which had been torn apart during the long, hot summer of 1967 by violent and bloody confrontations between blacks and police. America was on the edge: the 1960s appeared ensnared in unending violence both abroad and at home. There seemed no end to it, with matters only seeming to worsen in 1968. “The story of ’68 is heavily political but also one of sharp cultural and societal conflict,” Witcover says. “The drama was played out in the neighborhoods, on the campuses and in the workplaces as much as political backrooms and battlefields abroad." 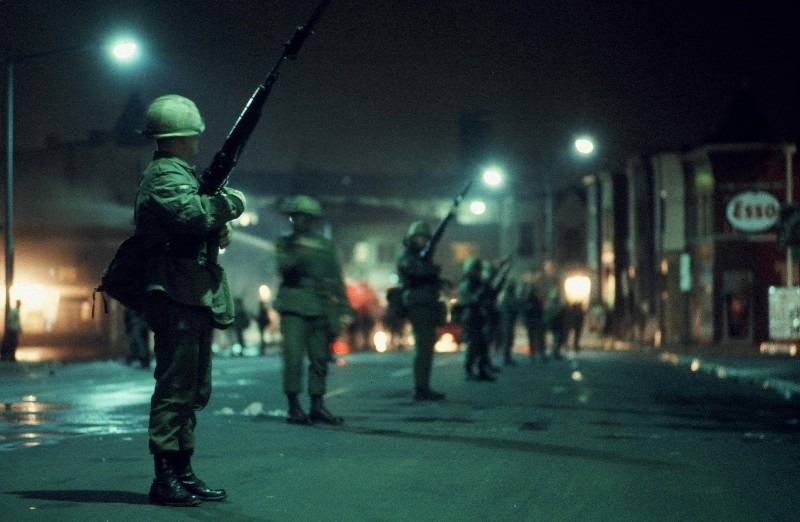 National Guard troops on the street in Washington, DC, during riots following the assassination of Dr. Martin Luther King Jr. in April, 1968. “Buses had been parked all around the White House as they didn’t know if could hold off the rioters,” Brack says. “I remember two Japanese diplomats who asked me if I thought my country could fold and be overthrown — I’d never thought about it, as surely it could never happen. But then I started thinking about it. It had never occurred to me before as a possibility.” Then in June, senator Robert Kennedy was assassinated as Americans reeled in bewilderment at what was happening to their country. The chaos of the convention confirmed for many that the Democratic government has lost the plot. 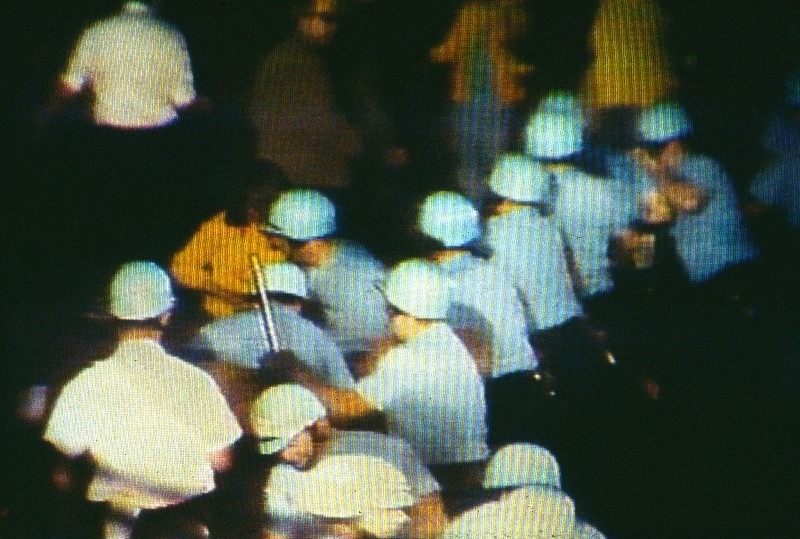 A group of policemen in riot gear confronting a crowd of protesters in Chicago during the Democratic National Convention. “The city of Chicago ran on officially sanctioned violence against minorities and counterculture,” says University of Texas history professor James Galbraith, who attended the convention as a 16-year-old with his delegate and floor leader father. “The protesters were an affront to the mayor’s management of the convention, Daly was embarrassed and had no qualms about teaching them a lesson. It’s important to recognize this was violence sanctioned by someone who was a major force in the Democratic party against a cultural movement and the expression of widespread opposition to the war." 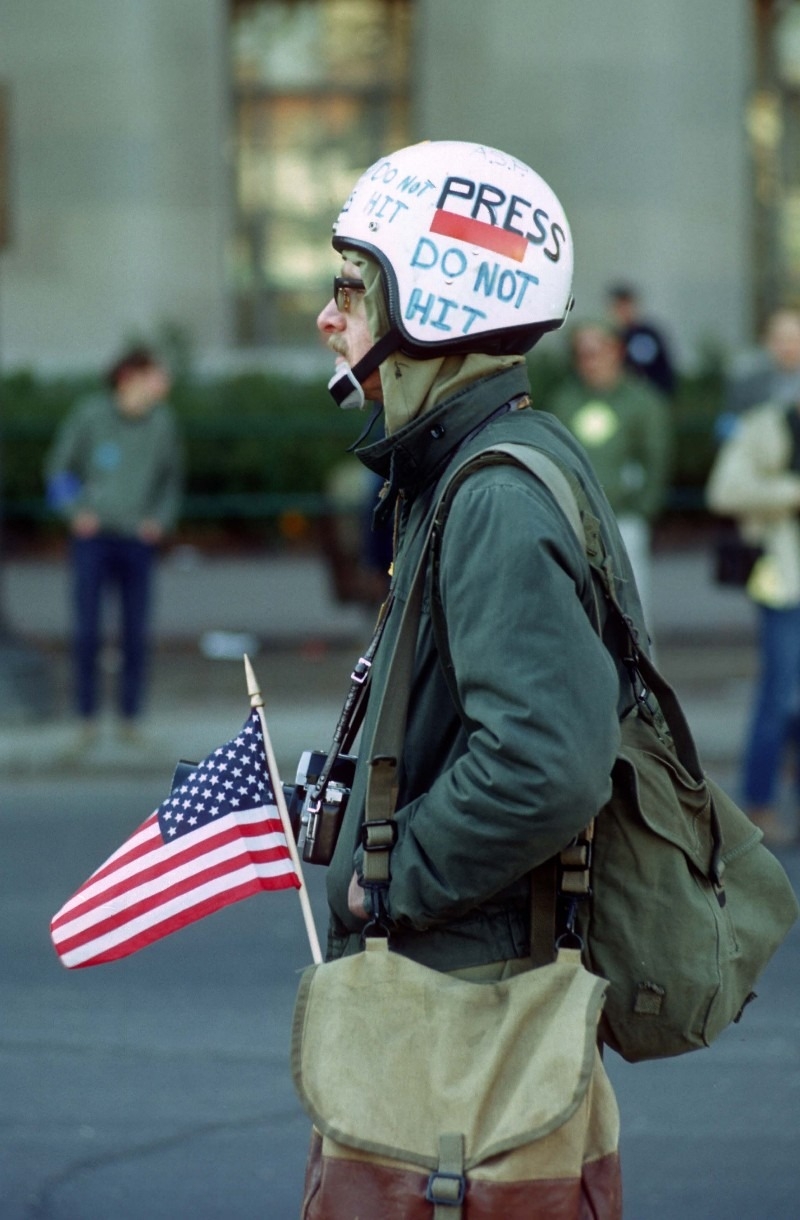 A press photographer covering a Vietnam War demonstration in Washington, DC. “We’d been covering confrontations and riots for two to three years,” Brack says. “All the journalists had their own riot gear, it was expected to happen back then. It was just another day at the office.” In Chicago, however, the media suddenly found themselves targeted explicitly. “Police burst out of the woods in selective pursuit of news photographers,” Nicholas von Hoffman wrote in the Washington Post. “Pictures are unanswerable evidence in court. They’d taken off their badges, their name plates, even the unit patches on their shoulders to become a mob of identical, unidentifiable club-swingers.” 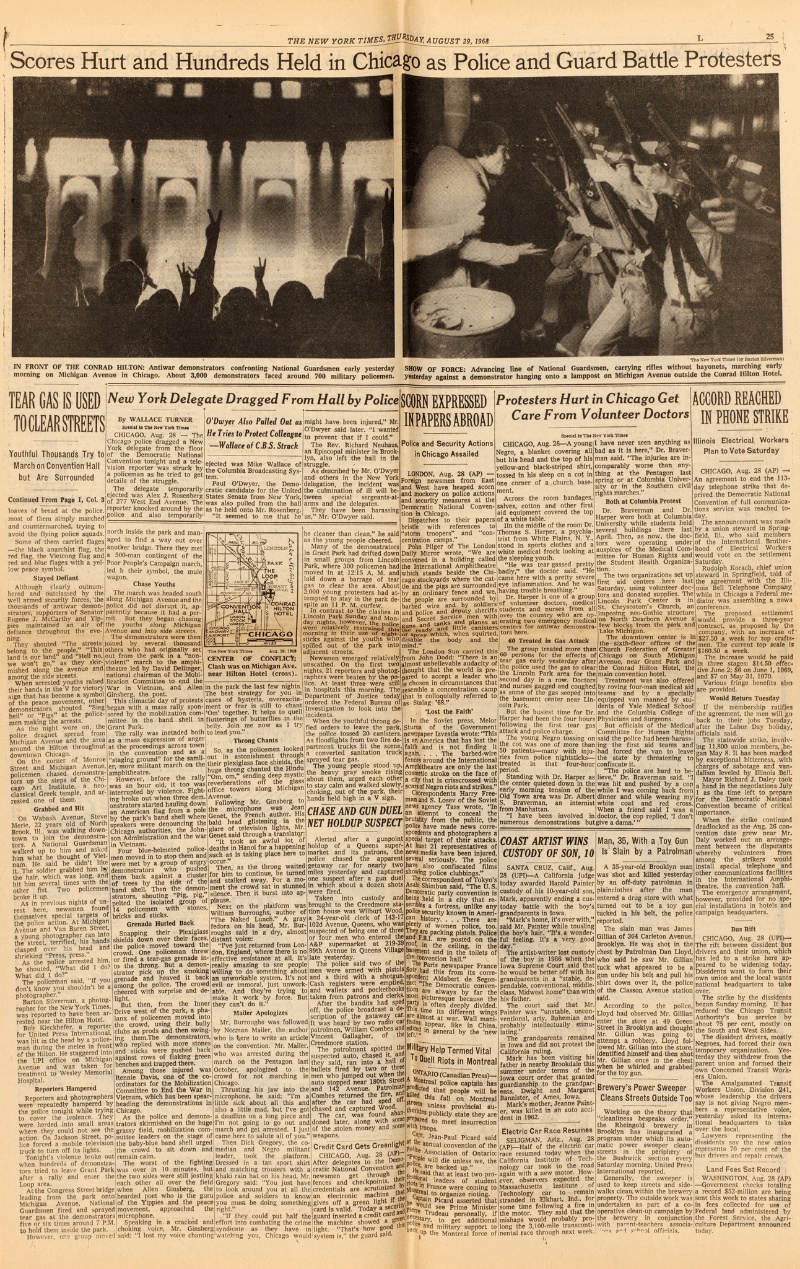 “Scores Hurt and Hundreds Held in Chicago as Police and Guard Battle protesters” reads the headline in The New York Times, Aug. 29, 1968. By the end of the convention, the delegates finally managed to vote on Hubert Humphrey, the serving vice president, receiving the Democrat nomination. But the damage had been done, and the contrast with the orderly Republican National Convention that had occurred earlier at the beginning of August couldn’t be starker. “The Democratic Party did enough damage to itself — they gave themselves a deep wound in 1968,” Galbraith says. “Scenes of highly telegenic violence conveyed the deep split and breakup of the Democratic party over the Vietnam War.” 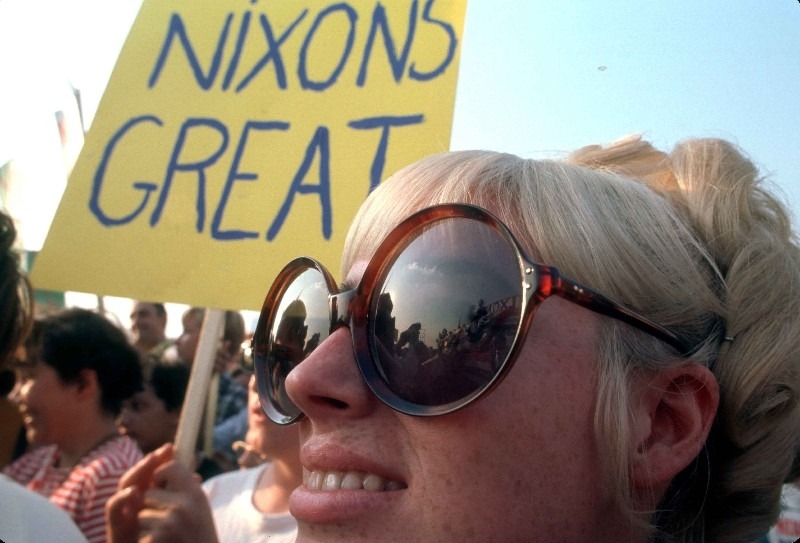 A Richard Nixon supporter listening to Nixon during a campaign speech in 1968. Nixon was able to offer up the shambles of the DemocraticNational Convention as further evidence that only he and his party could be trusted to resolve the Vietnam War dilemma peacefully and restore law and order at home. Meanwhile, the Democrat Party continued to bleed voters, as many constituents were incensed by Humphrey’s nomination, seeing it as a woeful endorsement of more of the same, especially in relation to the Vietnam War. “People were really angry, as Robert Kennedy probably would have got the nomination and ended the war,” Shames says. “We were so angry we didn’t vote and let Nixon in.”