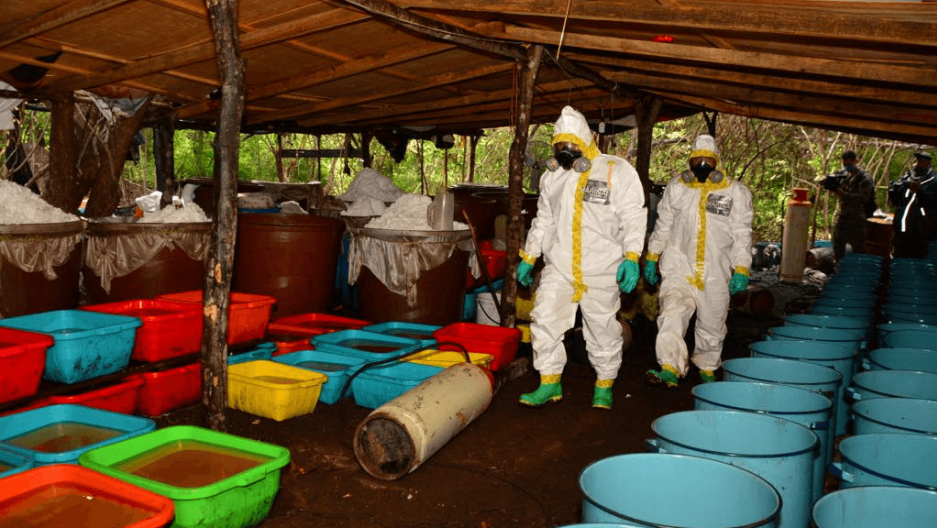 Forensic technicians of the Mexican Navy are seen at a clandestine drug processing laboratory where they seized 50 tons of methamphetamine discovered during an operation in the town of Alcoyonqui, on the outskirts of Culiacán, Mexico.

Last year marked a deadly turn for both Mexico and the United States. Mexico suffered record levels of homicides due largely to cartel-related violence. Across the border in the United States, driven by the deadly opioid epidemic, drug overdoses reached an all-time high.

Now the US and Mexico have joined forces on a new initiative to try and dismantle the financial infrastructure of drug kingpins in Mexico, an effort they hope will stem the tide of violence in Mexico and curtail the flow of heroin and illicit fentanyl flowing into the US.

“To be crystal clear, the drugs are being manufactured in Mexico and the Mexican cartels control the routes into the United States for distribution. It’s not just Chicago; the same Mexican drug networks also pipe methamphetamines to Milwaukee, Indianapolis, Detroit and also St. Louis,” said Brian McKnight, special agent in charge of the Chicago Office of the Drug Enforcement Agency, at a press conference in Chicago announcing the new initiative.

Under the joint effort, the DEA will open an office in Chicago that will focus on international investigations of the drug bosses. The DEA will also create a new task force in collaboration with the FBI, Chicago Police Department and the Department of Homeland Security that will target local US gangs distributing drugs in Chicago.

McKnight said a big change is that now the two countries will focus on attacking the huge financial operations of these powerful drug cartels.

“We will be aggressively attacking the cartel’s financial infrastructure by denying revenue. Going back down across the border. Hundreds of millions of dollars that goes across the border in drug money everywhere that elevates the cartels' power in Mexico,” he said.

Felipe de Jesús Muñoz Vázquez, a deputy attorney general of Mexico who was also in Chicago for the announcement, said now it’s time for the US and Mexico to work even more closely to eradicate these criminal operations.

“The message that they are sending to the drug dealers is that there are no frontiers to this war,” he said.

The idea of attacking the drug trafficker’s money may seem obvious. According to the Department of Homeland Security, Mexican cartels earn between $19 and $29 billion from drug sales in the United States.

But going after the finances of these groups has not been a priority until now, said David Shirk, a Mexico security analyst and professor at the University of San Diego.

A report last year from the International Monetary Fund criticized Mexico for failing to investigate and prosecute the cartel’s vast money laundering enterprise. According to the report, the drug leaders use the money to accumulate property, weapons, jewelry and other goods. They also store the cash in safe houses and invest in restaurants, hotels and nightclubs.

Shirk said going after these assets is essential to dismantling the cartels. But it’s easier said than done. “These financial schemes are highly sophisticated and difficult to detect until well after the fact,” he said.

For example, the Sinaloa cartel is estimated to have made more than a billion dollars under the leadership of Joaquín Guzmán, known as El Chapo. But a year and a half after Guzman was jailed and extradited to the US, neither country has been able to locate the money.

This new joint effort between the US and Mexico also doubles down on the controversial kingpin strategy — the idea that you break up cartels by targeting their leaders. Mexico says as part of this deal, it will offer a $1.6 million dollar reward for information leading the capture of the leader of the powerful Jalisco New Generation Cartel. The US has offered $5 million.

Jaime López, a security consultant in Mexico, said that for years Mexico has been focusing on bringing down the top drug cartel bosses at the urging of the US, which in the last decade has poured nearly $3 billion under that strategy under the Merida Initiative.

“It’s a tried and true approach. It lies at the heart of the American criminal justice system as well. There is this notion that big criminals cannot be allowed to roam free on the streets,” he said.

But there are critics of the kingpin strategy who say it not only keep the drug trade alive, it also fuels more violence.

“The problem with the kingpin strategy is that they sort of beheaded them but they didn’t dismantle them. And just beheading those organizations creates those power vacuums,” said Deborah Bonello, a senior investigator with the think tank InSight Crime.

Those power vacuums, she says, lead to turf battles that contributed to 31,000 people being killed last year, the high number on record. It also turned resort towns like Los Cabos into the scenes of shootouts. This year’s political campaigns were also bloody, with more than 130 candidates killed in the run-up to July’s elections.

And fighting the cartels will also require tackling other big challenges that originate in the US, like stopping the flow of guns illegally trafficked from the US and confronting drug use in America.

Ultimately, whether or not this new US-Mexico partnership to fight drug trafficking will move forward will depend in large part on Mexico’s newly elected President Andrés Manuel López Obrador, who takes office in December.

His spokesperson would not comment on the new drug-fighting partnership. But López Obrador’s campaign message was a softer one. Instead of attacking the cartels head-on, he said he wants to address the root causes of violence, Bonello said.

“Which is poverty, education, unemployment. You know, all the factors that do drive young men and increasingly women to get involved in drug trafficking.”

López Obrador has floated more ideas that could fly in the face of this new US-Mexico initiative. He has said he wants progressive drug policies, like amnesty for nonviolent criminals — proposals that could challenge this latest effort by the US and Mexico to fight cartels.