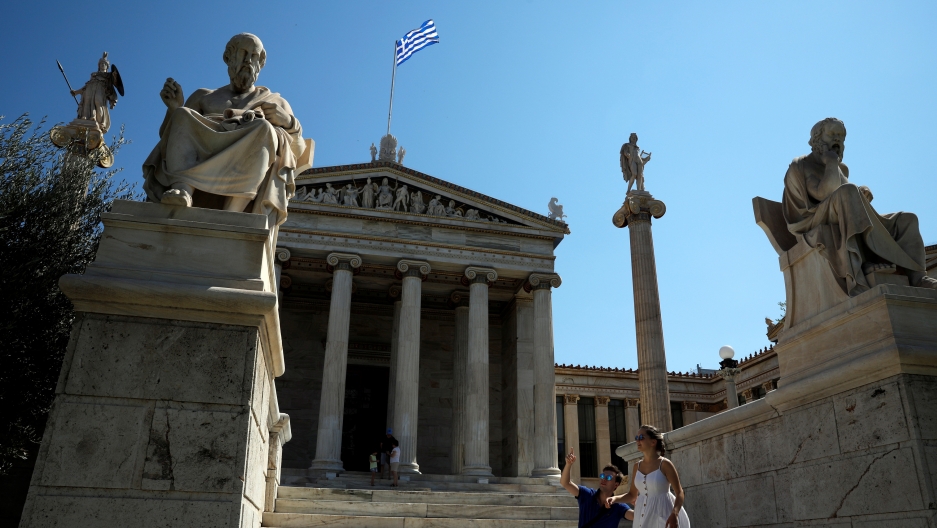 In central Athens, the sun-drenched streets are filled with tourists clutching at shopping bags and locals crowding cafes. It’s a far cry from the turmoil that has rocked this country over the past eight years.

At long last, things seem to be looking up here. On Monday, after eight years of emergency loans, Greece exited the international bailout program that prevented it from going bankrupt.

It will continue to face difficult targets to pay back more than $300 billion in loans —  the biggest bailout ever in history — but its creditors, including the International Monetary Fund, have decided that the country is good to invest in again.

It’s also a major milestone in the European Union’s long and bumpy recovery from the 2008 global financial crash. With a population of just over 10 million, Greece is a small country relative to its neighbors, but its finances were in by far the worst shape and at one point its insolvency threatened to break up the bloc entirely.

As a result, top EU officials have declared the end of its bailout scheme — the last of five rolled out across Europe — a huge victory.

“Greece joins Ireland, Spain, Cyprus and my own country, Portugal, in the ranks of Euro-area countries that turned around their economies and once again stand on their own feet,” said Mario Centeno, head of the Eurogroup.

When the announcement was first made, the relief was tangible.

But that’s not the whole story. Far from celebrating, Greeks are still reeling from heavy pension cuts, tax hikes and troubling levels of unemployment, (which at 20 percent remain the highest in the Eurozone despite having dropped in recent years). Years and years of crippling austerity measures have shrunk Greece’s economy by a quarter, prompting hundreds of thousands of young people to emigrate and pushing nearly half the country’s elderly below the poverty line.

The effects of these ruinous policies — required by Greece’s creditors in order to better balance the books — can be seen everywhere, from the ubiquitous political graffiti on buildings to the homeless people rummaging through bins.

What pains Greek people most is that this is not really the end. Another round of pensions cuts is due next year, taxes remain among the highest in Europe and the country will remain under “surveillance” to stop it from lapsing into profligacy again. It’s a show victory – and Greeks know it.

“I don’t think that us exiting the bailout is going to make a huge difference,” says Theonie Vougioukli, an English teacher out shopping in the bustling Monastiraki neighborhood. “It’s only on paper and in general I don’t think that people really care about that right now.”

What they do care about is Greece’s financial future, which still feels very uncertain. These sentiments are echoed everywhere.

“The bailout is over, but the shackles and the asphyxiation continue,” warned major newspaper To Vima on Sunday.

Over in Athens’ central market, butchers present their finest cuts of meat for customers, but business has been slow in recent years.

“The economic situation is very low. It’s difficult with the money,” says Spyrous, a 45-year-old butcher, who declined to give his last name.

Spyrous has worked at this market for his entire life. He thinks of the end of the Greek bailout is a fraud.

“It’s a trick, a political trick from our [prime] minister,” he says. “I don’t think that something will change.”

In a way, Spyrous is right. Despite the bailout being officially over, Greece still has an enormous debt to pay off, a debt that comes to 180 percent of its GDP — the second highest in the world after Japan.

As part of its ongoing surveillance, the government must somehow maintain a budget surplus until 2060 for its creditors. It says it will do that without more austerity measures — but that seems unlikely.

For Greeks like Chris Kontos, a fashion photographer and magazine editor, it’s clear this financial crisis will have an impact for generations.

“If I ever have any kids, they will face the consequences of austerity that is going to go on for almost 40 more years,” he says as he sips on an espresso in downtown Athens. “I don’t see how anyone can be really positive about today.”

Yet he does see one tiny silver lining: “I think we can be optimistic about the fact that in the long run, maybe Greeks will start changing their approach to their lives, politics and social responsibility.”