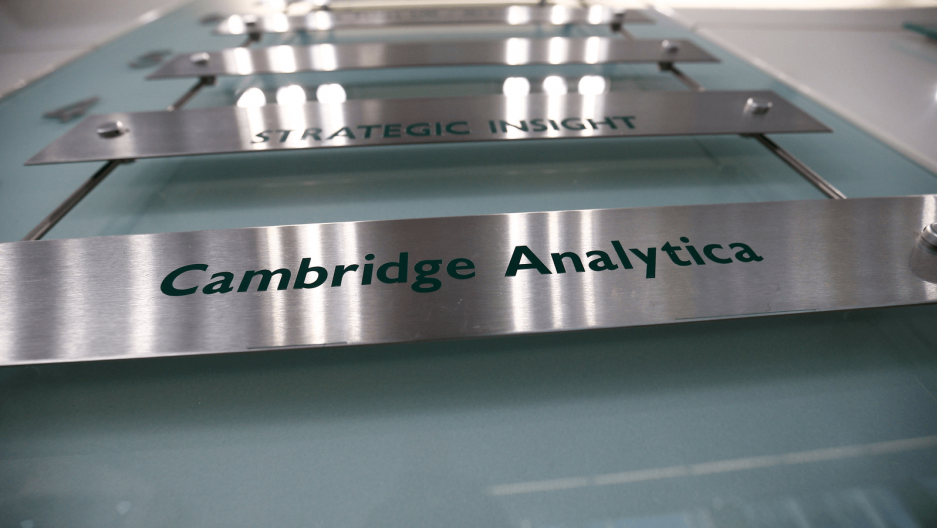 The nameplate of the political consultancy Cambridge Analytica is seen in central London, Britain March 21, 2018.

The $500,000, no-bid contract was awarded for “target audience research” to counteract terrorist propaganda, according to documents obtained by the Center for Public Integrity under the Freedom of Information Act.

SCL was hired by the State Department’s Global Engagement Center, which describes itself as the “primary coordination entity among all US federal agencies that work to counter violent extremist messaging and provide alternative narratives in the digital space.”

It hired SCL to develop a communication strategy that could reduce the “volume, credibility and effectiveness of ISIS recruitment propaganda.” The Global Engagement Center was also looking to “identify interventions” that would decrease the likelihood that potential recruits would join the Islamic State, al-Qaeda and other terrorist organizations abroad, documents show.

The documents include the original solicitation describing the kinds of services SCL would provide to the State Department and information about payments to SCL, totaling $496,232. They also detail the State Department’s justification for awarding the contract to SCL without conducting open bidding for contractors.

Cambridge Analytica, the SCL subsidiary, was founded by former Trump campaign and White House adviser Steve Bannon. The firm folded earlier this year amid a scandal involving how it obtained personal information from Facebook accounts, including potentially tens of millions of Americans.

Under the contract, the State Department wanted SCL to conduct “not less than 50 and preferably up to 75 interviews” of a representative sample of people who could be potential ISIS recruits across Europe, the former Soviet Union and the Middle East. Using these interviews, SCL was to “isolate those factors that have the ability to change the behavior” of ISIS recruiters and potential ISIS recruits.

SCL Group, which boasts more than 25 years’ experience conducting “behavioral change programs in over 60 countries,” was asked to identify which “groups, messages and messengers are capable of influencing the decision of potential recruits” to join ISIS and how these messengers could be mobilized to discourage recruits from joining ISIS or other terrorist organizations.

SCL was also tasked with developing a framework to assess the success of its own campaign. The “sole-source” contract bypassed the usual competitive bidding process for government contracts.

Documents obtained by the Center for Public Integrity show that the State Department justified circumventing traditional competition citing SCL’s “unique qualifications and special capabilities in designing influence campaigns that work” unlike other offerings which “are largely based on intuitive hunches or superficial research.”

The State Department further asserted that no other companies can compete with SCL in gathering the necessary data and analyzing it in a way that permits the design of effective, data-driven influence campaigns.

Further, the State Department argued that disclosing their justification for a “no-bid” contract would “disclose the executive agency’s needs and disclosure of such needs would compromise national security or create other security risks.”

The company then used this data to sell voter-targeting services to multiple political entities, including President Donald Trump’s 2016 presidential campaign and a super PAC then led by current National Security Advisor John Bolton.

Despite claims to the contrary by former employees, SCL associates, including Bannon, have insisted that they were distinct from Cambridge Analytica. But recently, one former SCL employee told The New Yorker: “I make no distinction between S.C.L and Cambridge Analytica, because nor does the company. … People sit together. You have both emails, depending which country you are writing to.”

In October 2017, another affiliate of SCL Group, SCL Social Ltd, filed a report with the Department of Justice that they had executed a social media campaign to boycott Qatar, on behalf of the United Arab Emirates, for $166,500, according to the Center for Responsive Politics.

This campaign, which occurred as tensions between the two middle eastern nations escalated into a full-blown diplomatic crisis, was reportedly aimed at “NGOs, foreign diplomats and certain reporters.” It coincided with the 72nd meeting of the United Nations General Assembly in New York City.

In May 2018, The Wall Street Journal reported that Cambridge Analytica and its parent company, SCL Group, would be closing its doors. However, a few months later, many employees of SCL formed a new entity called Auspex International, which announced it would provide “ethically based … boutique geopolitical consulting” services in the Middle East and Africa.

The group’s founder, Ahmed Al-Khatib, says that this new company is working to "tackle the spread of extremist ideology, which has poisoned my generation, preying on the minds of disenfranchised youth."